Approximately 204km, south of Delhi, is the city of Agra, the home of Taj Mahal, an embodiment of love and romance.

A UNESCO World Heritage Site and one of the Seven Wonders of the World, the monument attracts masses of domestic and international tourists from all over the world, all year round.

When you enter Agra, the first impression I got was that it is a congested city with nothing "worthy to remember" about it. Everything was quite ordinary. It was until I was told that the city is home to perhaps the most famous monument in the world.

Though I had read about Taj, I had never dreamed that one day I would reach the place. After four minutes' drive, I was catching my first glimpse of the Yamuna River (considered a sacred river), here I was thrilled by a distant view of the Taj across the way. PIC: The inside of Mumtaz Mahal and Shah Jahan tombs

As we continued, eventually we were at red brick building, it is the gateway to the Taj. The Taj Mahal gate welcomes each of its visitors with an inscription, written in a beautiful handwriting, on the great gate that reads: "O Soul, thou art at rest. Return to the Lord at peace with Him, and He at peace with you."

Here, you see the first glimmer of the majestic marble dome through a grand arched doorway.

Indeed, all stories about the Taj are true. It is elegant and delicate, clean and pure, literally sparkling like a blistering diamond ring. Indeed, the Taj Mahal is a true wonder of the world.

The main building rises on a red sandstone base, on the banks of River Yamuna, topped by a huge white marble terrace flanked by four tapering minarets.

However, until you know the love story behind the construction of the Taj Mahal, the beauty of the same would not enliven in your heart and mind and instead would come up as just another beautiful building/monument.

Mughni explains that Shah Jahan, initially named Prince Khurram, was born in 1592. In 1607, when he was strolling down the Meena Bazaar, accompanied by a string of fawning courtiers, he caught a glimpse of a girl hawking silk and glass beads. She was Mumtaz Mahal, who was known as Arjumand Banu Begum at that time.

At that time, the prince was 14 years old and Mahal, a Muslim Persian princess, was 15. After meeting her, Shah Jahan went back to his father and declared that he wanted to marry her. The two families met and they got married in 1612.

In 1628, Shah Jahan became the Emperor and entrusted Arjumand Banu with the royal seal. He also bestowed her with the title of Mumtaz Mahal, meaning the "Jewel of the Palace".

Though Shah Jahan had other wives , Mumtaz Mahal was his favorite and she accompanied him everywhere, even on military campaigns.

In 1631, when Mumtaz Mahal was giving birth to their 14th child, she died due to some complications.

While Mumtaz was on her deathbed, Shah Jahan promised her that he would never remarry and will build the richest mausoleum over her grave.

Mughni explains that Shah Jahan was so heartbroken after her death that he ordered the court into mourning for two years.  In 1632, Shah Jahan undertook the task of erecting a magnificent monument as a tribute to her, which is today known as the "Taj Mahal"

Indeed, if it was not for love, the world would have been robbed of a fine example upon which people should base their relationships.

Also when Shah Jahan died in 1666, his body was placed in a tomb next to the tomb of Mumtaz Mahal. 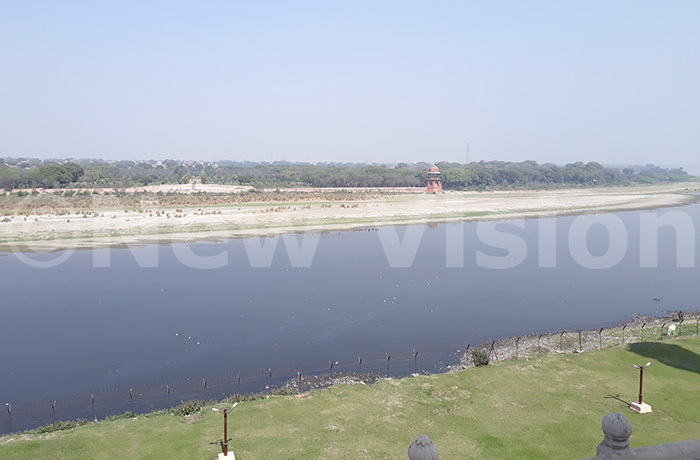 PIC: River Yamuna over looking the Taj Mahal in India

Construction began around 1632, involving 22,000 workers including masons, stonecutters, inlayers, carvers, painters, calligraphers, dome-builders and other artisans called on from all over central Asia and Iran.

Twenty-two years later, the monument, with a unique blend of Persian, Islamic, and Indian architectural styles came into its own, it was a sight to behold! Some sources estimate that approximately 32 million rupees was spent.

The Taj Mahal covers an area of 42 acres in total with the terrain gradually sloping from south to north, towards the river Yamuna in the form of descending terraces.

The main gateway situated at the end of the long watercourse, decorated in calligraphy with verses from Holy Quran and a domed central chamber, was constructed from the period 1932 to 1938. The original door of this massive sandstone gateway was made out of solid silver.

Mughni says it was constructed to serve the function of preventing the people from getting any glimpse of the tomb until they are right in the doorway itself.

With a vertical symmetry, the main gateway of Taj Mahal stands bordered with Arabic calligraphy of verses from the Quran, made up of black stone.

The main tomb of Taj Mahal stands on a square platform that Mughni explains that it was raised 50 meter above the riverbank and was leveled with dirt to reduce seepage from the river.

The four minarets on each corner of this square are detached, facing the chamfered angles of the main, Mughni says they are deliberately kept at 137 feet to emphasize the beautiful and spherical dome that itself is 58 feet in diameter and 81 feet high.

The western side of the main tomb has the mosque and on the eastern side is the Naqqar Khana (guest house), both made in red sandstone. The two structures not only provide an architectural symmetry, but also make for an aesthetic color contrast.

One can only marvel at the mosque and the rest house as despite being on the opposite ends, the two are mirror image of each other.

He adds that the garden is in Islamic style architecture, as a symbol of spirituality. "According to the Holy Quran, the lush green, well-watered is a symbol of Paradise in Islam," he quotes.

The raised pathways divide each of the four quarters into 16 flowerbeds with around 400 plants in each bed. The garden boasts of being a serene and soothing region in the entire complex making it the best place for taking snaps of the main tomb. 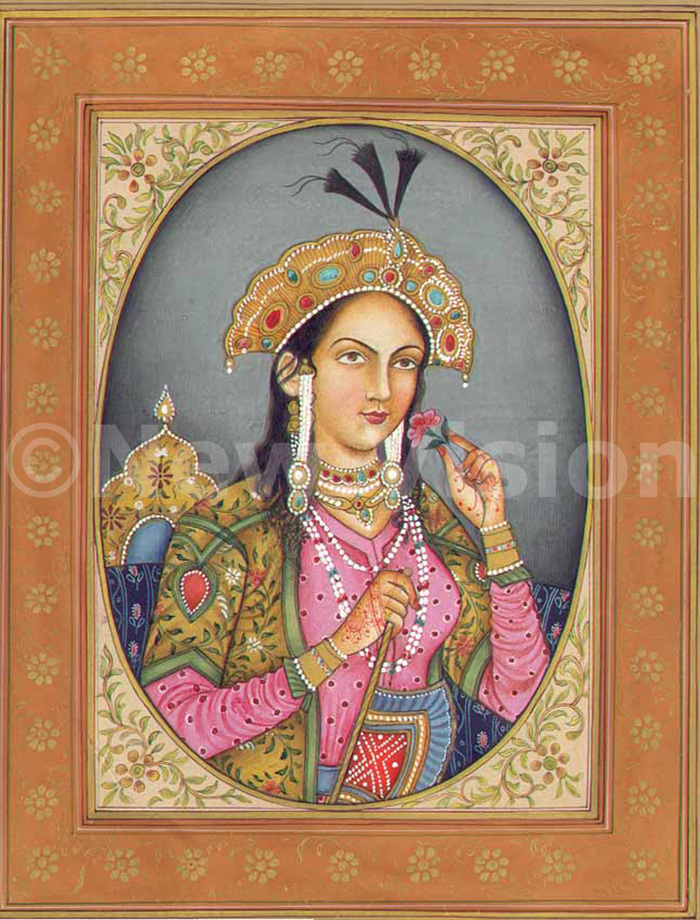 PIC: Mumtaz Mahal for whom the beautiful Taj Mahal was built

As majestically dazzling as it looks from the main gateway, the insides of Taj Mahal is no less stunningly beautified either.

The painstakingly designed and richly carved interiors brilliantly compliment the magnificence of the entire structure with subtleness.

With basic elements in Persian, the large white marble structure stands on the square platform containing a symmetrical building with an arch shaped doorway known as Iwan, which is decorated with exquisite calligraphy and is topped by a large dome and a finial.

The angles of the tomb consist of semi-octagonal curved cubicles of equal size. Attached pilasters rising from the base of the tomb demark each of the entrances, on both the sides.

The main chamber houses the false perforated marble screens tombs of Mumtaz Mahal and Shah Jahan; as the actual graves are located at a much lower level.

Mughni explains that the marble screens are used to transmit light into the burial chamber, and they are typical of mausoleums of the Mughals.

Semi-precious stones are exquisitely decorated on both the tombs. However, they are engraved with passages from the Holy Quran, Mughni explains that the massages basically mean the promise of God's mercy and forgiveness.

There are also, ninety-nine names which Mughni explains that they are beautiful names of Allah, and they are in calligraphic inscriptions on the sides of the actual tomb of Mumtaz Mahal.

Moving ahead, all the elements, architecture, furniture, and decorations culminate together to create an eschatological house for Mumtaz Mahal, and that of Shah Jahan. They are formed with black marble inlaid in white.

The floor of the Taj is paved in a geometrical pattern consisting of octagonal stars alternating with cruciform shapes.

One of perhaps the longest echoes of any building in the world can be heard in this perfectly designed hall of 24 feet to a side, with two tiers of eight radiating niches.

The natural and beautiful flowers like tulips, irises, daffodils, and narcissus filled in luxurious vases appear here in basic tripartite arrangement rather than individual flowering plants of the pishtaq halls outside.

Another remarkable feature that surrounds the monuments of Mumtaz Mahal and Shah Jahan in the central chamber is the intricately carved marble screen and is a delight to look at.

IGG to seize property of 3 leaders