Over 30 priests, deacons ordained at Rubaga
Next Story

"We need capital and skills for the youths. All the other things are there," the President says during the International Youth Day celebrations.

"We need capital and skills for the youths. All the other things are there," the President says during the International Youth Day celebrations.

PIC: President Yoweri Museveni tours the Songhai Model farm at Kampiringisa in Mpigi district on the National Youth Day. He was taken around by Prof. Godfrey Nzamujo, the regional director of the Songhai Model, on Sunday. (Credit: Eddie Ssejjoba)

MPIGI - The fundamentals that the young people of Uganda need to develop, including peace, health and education, are already in place. What is missing in the equation, though, is the all-important capital and skills, according to President Yoweri Museveni.

With Uganda's 40 million-plus population largely young, the President underlined in bold the need to direct more support to youth groups.

"We need capital and skills for the youths. All the other things are there."

He said legislators and ministers need to work together to deemphasise expenditures on increasing salaries and travelling abroad, and instead channel the funds to creation of capital for youths.

Museveni's emphatic message during the International Youth Day national celebrations at Kampiringisa Rehabilitation Centre in Mpigi district on Sunday built onto what previous speakers had pointed out. Youths are requesting Government to continue supporting young people with equipment for production, said Lillian Aber, the chairperson of the National Youth Council.

She highlighted inadequate funding for youth structures as one of several obstacles they face, saying youth councillors want direct audience with President Museveni.

In her delivery, Aber said her team cannot perform their duties because of "budgetary cuts", adding that they have previously faced "challenges" with the finance ministry over funds.

Rev. Fr. Godfrey Nzamujo, the founder of the Songhai Model, an organic agricultural project that Uganda has adopted, said the initiative will be not only for youths, but also for all those involved in agriculture in the country.

But the Dominican priest's sticking point here was that reversing the vicious cycle of poverty can best ride on the change of attitudes. She said existing problems such as poverty and employment, gender-based violence as well as early child marriages and female genital mutilation remain a thorn in the side of youth development.

Malango, in her speech, delivered UN secretary general Antonio Guterres' message, part of which he said "we must invest in the young people".

For the country to make more money through export promotion and import subsitution, President Museveni underlined the following:

- There will be no more exportartion of unprocessed maize. In the areas where maize is produced, equipment necesary for making maize flour will be got.

- Instead of creating more districts, that money will be invested in treating leather here in Uganda.

- Refining sugar for making syrups will also be done here -- instead of importing sugar.

But for the above to be realised, the necessary equipment will have to be employed.

After his delivery, Museveni officially launched the Pilot Songhai Model Project - Uganda, which was initiated on the continent in west African nation Benin by Rev. Fr. Nzamujo (pictured below wearing a black hat). 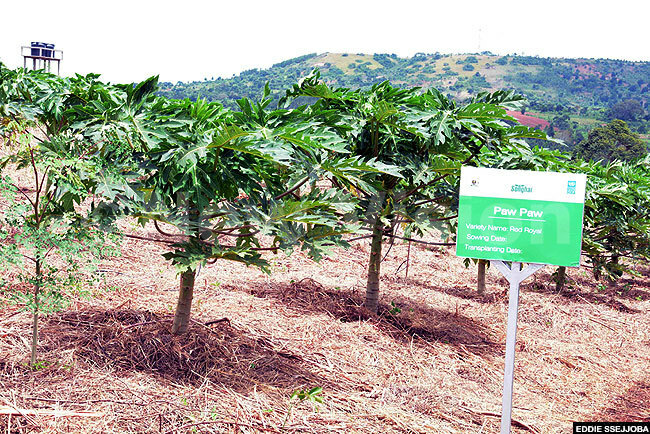 Earlier, the President toured the various projects of the expansive demonstration farm, including piggery and food crops.

"Prof. Nzamuyo has done a commendable job. He found the problem of the soil was lack of microbes," said Museveni, adding that the initiative is "very good" and "welcome" as an "alternative science" that improves yields.

The Kampiringisa farm is an expanse of green vegetation, modern fish ponds, agro-forestry and suitable infrastructure.

It is projected to be self-sustainable in three years' time, and according to Malango, the UNDP will support the project if the government protects the site as a centre of excellence in the region.

Youths award Museveni and others medals 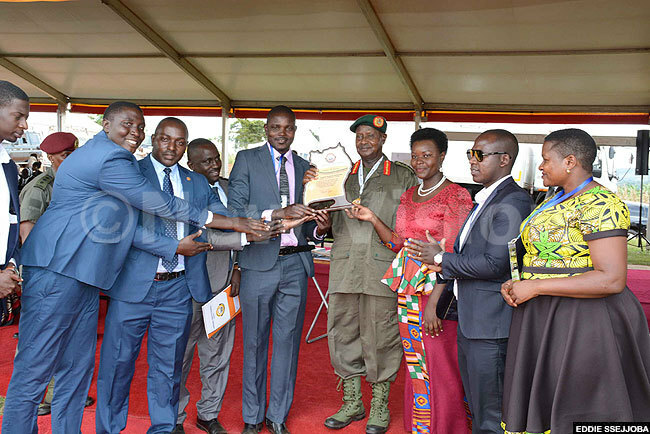 Meanwhile, the youths, through the National Youth Council, recognised President Museveni twice - first, for his role in establishing peace and security in the country as "one of the most respected leaders on the continent", and secondly for ensuring that youths are empowered.

Prime Minister Dr. Ruhakana Rugunda was also given a medal for being "one of the greatest inspiration to the youth movement and a patriotic factor".

Minister Florence Nakiwala Kiyingi (state for youth and children affairs) was recognised for demonstrating "great passion for development of youth".

Gender ministry permanent secretary Pius Bigirimana was awarded a medal for leaving a "positive trail wherever he has worked". And for being "energetic and full of passion", they baptised him "a senior youth".

Nathan Mukwaya, the executive secretary of the National Youth Council was also one of the awardees for having "mentored and guided many youth leaders in the country" as well as being a "linkage between the current youth generation and the previous one".

Area of Ebola risk from animals bigger than thought