Men in refugee camps to play role in famil...
Next Story

Lance Corporal Geoffrey Odaga, 47, at the start of his trial entered a not guilty plea in the case where he is accused of shooting three people dead.

Appearing before the General Court Martial sitting in Gulu and chaired by Lt Gen. Andrew Gutti on Thursday, three murder charges as well as charges of attempted murder and aggravated robbery were read for Odaga.

When Gutti asked Odaga whether he had committed the alleged crimes, the suspect chose to remain silent and he thus entered a plea of not guilty.

Odaga's choice to remain silent however did not go down well with Gutti who demanded to hear a verbal response from him.

Attempts by Odaga's defence counsel Cpt. Charles Ssekayita to enter a not guilty pleae on behalf of his client were shut down by Gutti.

"Why are you interfering when I want a response from the suspect himself? Let him say whether he is guilty or not," Gutti noted.

Ssekayita then requested a brief adjournment to consult with his client which was granted. 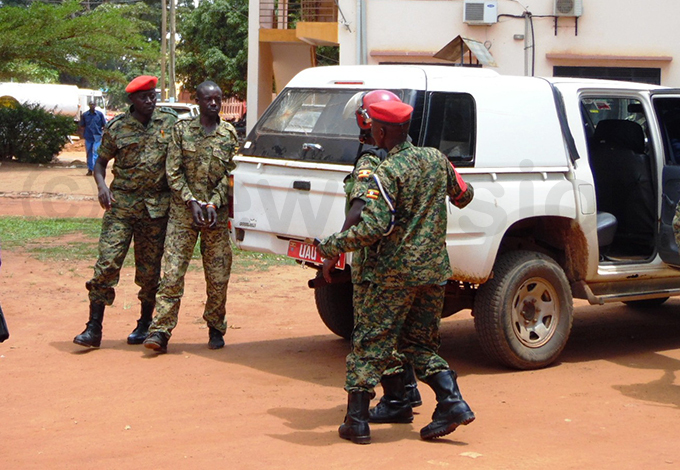 Soon the proceedings resumed with Gutti reading more charges and Odaga still did not give any verbal response.

"I am wondering what you went to do outside. Instead you are just wasting the court's time," a displeased Gutti noted.

Odaga is accused of shooting dead Sunday Wokorach Ouma, Fred Yasin and Denis Richard Ocen as well as the attempted murder of Jimmy Ojok. He is also accused for robbing four bottles of beer and cash amounting to sh61,500.

"This case is very clear. People saw him killing innocent civilians. I wonder why he should even plead not guilty. I am sure if he had pleaded guilty, the court would have given him a lighter sentence," Laker Santa who was in the court told New Vision.

On the fateful day, it is alleged that Odaga (RA 159357) from the UPDF 4th Division barracks, armed with a gun number SMG UG UPDF 3604, stormed a bar known as Smile Panda II in Kabed'opong trading centre in Bardege division at around 11:00pm and killed three men and robbed the bar before he was arrested shortly after.

Prosecution led by Maj. Raphael Mugisha and Capt. Samuel Masereje told court that investigations into the case had been completed and they were ready to proceed. 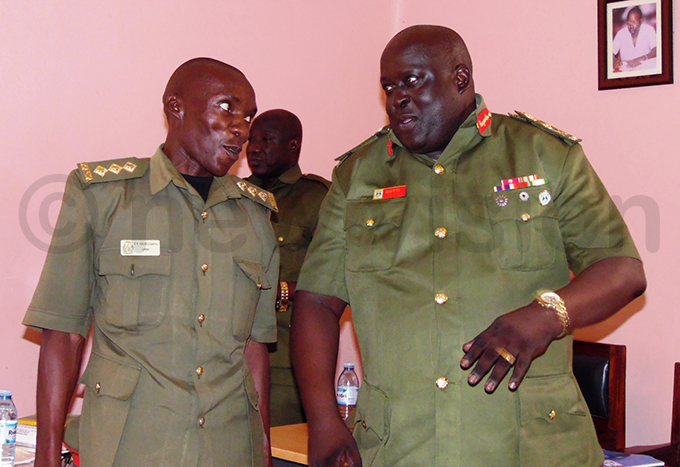 Gen. Gutti (right) interacting with a colleague during a court break at the trail. Photo by Arnest Tumwesige

The prosecution team begun by examining barmaid Doreen Aber Molly, who told court that she could ably identify the suspect by the scar on his face because she saw before handing over the money he forcefully took that night.

"After shooting the bar owner and others, he came straight to the counter where I was hiding and ordered me to give him beers and money," Aber stated.

"Before he went out after the killing, he told me that I should thank God that he did not kill me," she added.

The second witness Solomon Owachgiu, 28, years also collaborated his narration with that of Aber though he said Odaga went away with six bottles of beer instead of four.

The trial was adjourned to Friday.

What is the cause of election violence?

Opposition rule out use of violence