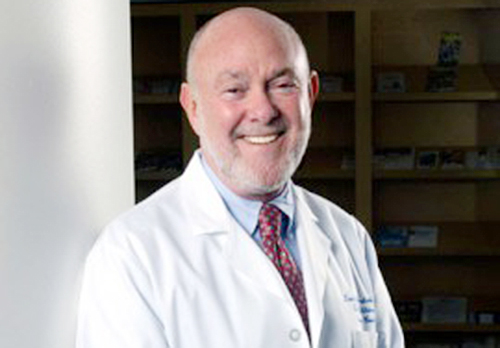 KAMPALA - A doctor who has spent most of his adult years taking care of children with cancer and blood related ailments in Africa and the United States has been awarded with an honorary doctorate of science by Makerere University.

Dr. David Poplack, an American pediatrician and former director of Pediatric hematology and oncology at Texas children's Hospital and Baylor College of Medicine, was also recognised for his ground breaking researches on cancer in children.

During the same award ceremony, Wednesday, at the Makerere main building, a world renowned philanthropist, the late Ryoichi Sasakawa was also conferred an honorary doctorate of law for his contribution towards eradicating hunger in Africa.

According to the Vice Chancellor, Prof. Barnabas Nawangwe, the two successfully passed through all the vetting procedures.

With many accolades to his name, Dr. Poplack is the first medical doctor affiliated to the Makerere College of Health Sciences to receive an honorary doctorate from the University.

He was recognised for the tremendous impact he has made in the care of children with cancer worldwide.

He is applauded for the ground breaking researches he carried out on child cancers and his leadership in pediatric cancer advocacy.

Speaking at the awards ceremony, Professor Sarah Kiguli, from the College of Health Sciences described him as a humane, kind, generous and principled person with a deep sense of social justice.

The American pediatrician is recognised for being a key leader in efforts that have led to increase in the number of children who survive cancer, from 20% in the 1970s o 80% to date in the developed world.

His research on Leukemia caused advancements in medicine especially for people living with HIV/AIDs and cancer.

For through research he also proved that leukemia in children can be cured without irradiating the brain.

In his acceptance speech, Poplock promised to committee all his efforts towards finding a cure to cancers in children and ensuring that children have a second chance at life to lead productive lives.

"Having learned from the experience of our HIV interventions across Africa over the past 18 years and having successfully made the journey from the dismal childhood cancer outcomes in our past to our current high cure rates in the US; we are confident that Uganda can and will ultimately achieve the same degree of success," he said.

According to him, in Uganda, over 7,000 children develop cancer every year and over 30,000 children are born with, or develop, life threatening blood diseases such as sickle cell disease.

Sasakawa was honored for his contribution in the initiating the Green Revolution in Africa through the Sasakawa Africa Association (SAA).

Nawangwe stated that when Africa was grappling with food insecurity in the 1970s and 80s, he responded by sending food aid and was able to convince the Nobel Laureate, Dr. Norman Borlaug and former US president Jimmy Carter to search for a more sustainable solution to Africa's food challenges.

"Through his foundation, the late Sasakawa supported innovative degree programmes at Makerere University whose impact on agricultural development through extension education and distance learning is visible in various communities," he said.

Sasakawa was also praised for his contribution in the fight against leprosy and the reconstruction and development of Japan after the World War II, through his Nippon Foundation.

Dr. Ezra Suruma, the University Chancellor, noted that the story of the two personalities is a testament that people must build upon their successes to reach out to the needy.

"Today's award ceremony is a testament to the commitment of these men to make the world a better place. We are challenged by you to give back to the community through helping others to achieve their dreams.

In her remarks read by the Minister of state for higher education, John Muyingo, the first lady, Janet Museveni, stated that the works of the two personalities are lessons to each Ugandan on the importance of hard work and perseverance.

"Yours is a celebration well deserved and well-earned, and the government and the people of Uganda count it a great honor and privilege to identify with and celebrate this milestone with you," she said.

She applauded the University for nurturing and developing meaningful national and international relationships with other higher institutions and influential people.

"I am happy to note that the university in its strategic planning process is seeking to broaden its internationalization agenda.  Internationalization will enable our students to experience other cultures and challenge their preconceived notions about the world," she said.

During the ceremony, pioneer students of the East Africa Pediatric Hematology and Oncology Fellowship were passed.