The Catholic Centenary Memorial Choir marked 40 years over the weekend.

The Catholic Centenary Memorial Choir marked 40 years over the weekend.

KAMPALA - Buganda's minister of Finance, Robert WaggwaNsibirwa has commended members of the Catholic Centenary Memorial Choir (Cacemcho) for their dynamic sacred music ministry, which he said has helped many people to know God and his commandments.

"I do acknowledgeyour steadfast commitment to spreading the good news of salvation through music.

"Through your sacrifices of money and time, you inspire many people to offer voluntary services to the Church and the community,"saidNsibirwa.

Nsibirwa made the thanks giving remarks during a concert of sacred music organised by the Catholic Centenary Memorial Choir at Sharing Hall, Nsambya on Sunday. The concert was one of the activities to mark 40 years of the choir's inception. 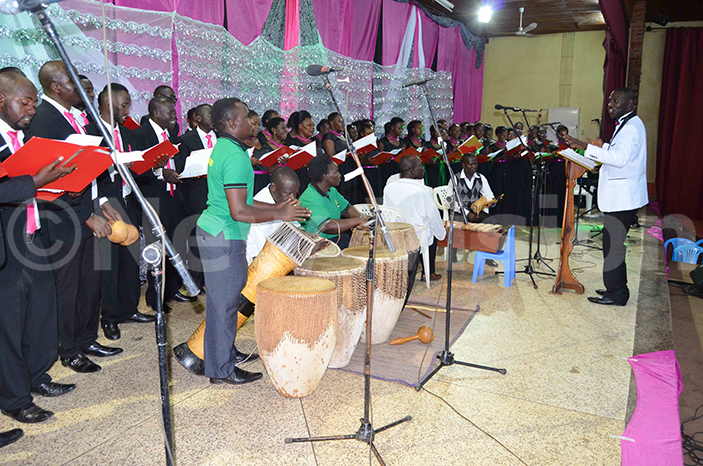 Cacemcho, which draws its membership from all the Catholic dioceses of Uganda, was formed in 1978, to lead the singing during the celebrations of the centenary of the Catholic faith (in 1979).

During the four decades of its existence, the choir has toured and performed in countries like the Vatican (three times), France, Jerusalem, Germany, Rwanda, Kenya and Tanzania.

Peter Kasasa, the choir's Public Relations Officer said that the choir needed sh18m (eighteen million) to buy a public address system. Nsibirwa, who was the Chief Guest, donated sh2.6m to the choir. A total of sh8m (eight million shillings) was raised in cash and pledges during the concert.