The workshop overflows with objects long forgotten by customers.

The workshop overflows with objects long forgotten by customers.

PIC: A photo taken on August 27, 2014 shows the head of a doll inside the "Artistic Restoration Squatriti Hospital of Dolls" along Via di Ripetta in Rome, which is packed with parts of antique dolls, toy soldiers, puppets and ceramics figurines. (AFP)

ROME - Tucked away in one of Rome's most fashionable shopping districts, antique doll parts pile up in the tiny shopfront of the Squatriti family boutique, offering a window into another age.

Neapolitan theatre actors forced to diversify in the aftermath of the Second World War, the Squatritis opened the little shop of doll horrors in 1953, initially with the idea of restoring valuables belonging to wealthy families that were damaged during the conflict.

But they quickly began to specialise in antique dolls, some dating back to the 19th century.

Federico, 56, runs the shop that has been a true family affair ever since it first opened.

His grandmother, parents, uncle and cousins have all worked there at one time or another, restoring treasured objects of princesses, intellectuals and actors to their former glory.

The workshop overflows with objects long forgotten by customers. Puppets, toy soldiers and 100-year-old earthenware pile up to the ceiling. 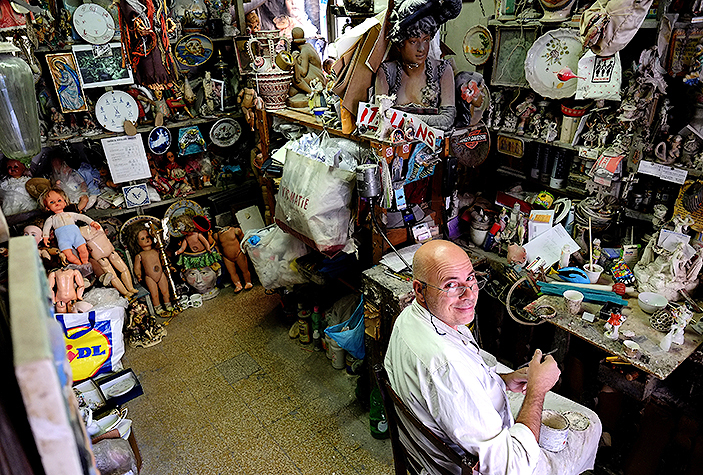 "The thing they (the dolls) all have are eyes pushed inside (the head), because children always stick their fingers in there," he adds.

Despite their expertise, there are some dolls that just can't be repaired, usually because spare parts can't be found.

These half-formed relics have come to populate the shopfront window, the store's shelves and in particular its macabre cellar, which is populated with doll body parts and has been nicknamed "limbo" by the staff.

The Squatriti family say that there are only a handful of restorers like them left in Italy, and that customers come not just from all over the country, but as far away as London or Africa.

However, the family know that the writing is on the wall for the shop.

"It is normal that eras end. We have tried to extend ours to the maximum but the end will eventually arrive."