The ministry of education and sports is planning to take all science teachers for refresher courses as a way to improve on their teaching techniques in science subjects.

Speaking during the open science day at Uganda Virus Research Institute in Entebbe, the state minister for higher education, Dr John Chrysostom Muyingo, said to prepare scientists today it requires a very well-motivated teacher who has got good skills, adding that the training will take place this year.

"Teachers who used to teach sciences used to say that science was for a few students, but we believe all students can do sciences," Muyingo added.

The fourth open science day was held under the theme Science for a Healthy World, which attracted more than 1000 students from Uganda Martyrs Namugongo, King's College Budo, St Joseph's College Ombaci, Budo S.S and others from Kapchorwa and Arua district.

The open day provides an opportunity for young people interested in science, to learn about research, interact with practicing scientists and researchers as well as to explore the possibility of a science-research career. The day was also meant to give the children a hands-on opportunity to explore science outside their classrooms.

There were different stalls and the students learnt about viruses that are caused by insects, they also learnt how some of the experiments work in the laboratory, how to manage and analyse data and work out from data whether the virus is going to spread quickly or not. 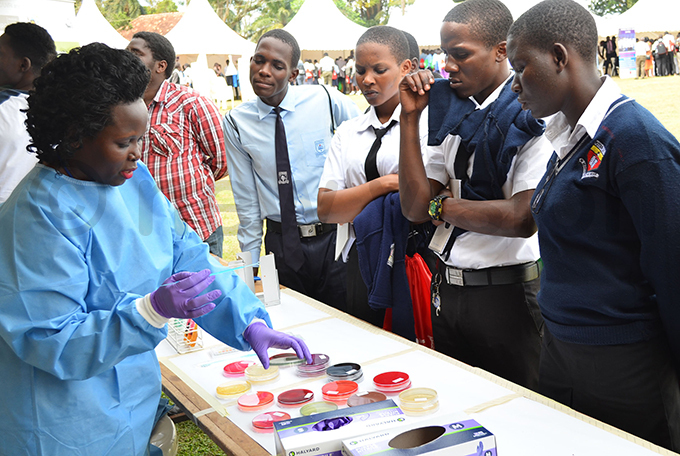 Muyingo revealed that the government will empower secondary school teachers and ensure that all laboratories are equipped so that they improve their science learning skills and techniques.

Recently, Muyingo said government was to recruit 2,000 teachers in a bid to solve the existing challenge of low staffing in schools countrywide.

He said if the country is to develop, there is a need to invest in science and encouraging students to take on science subjects.

"The rising economies of South Africa, China and South East Asia have strongly embraced science, they are manufacturing drugs to cure malaria and other ailments, designing and making automobiles, electronics and some have even sent astronauts into orbit. They have begun reaping from their scientific potential.

There is no reason why our country cannot aspire to that as well, since there is a lot we could do when do when armed with science," Muyingo said

He said Uganda has a weak public science culture saying that most people are reluctant to get into anything to do with science. He added that science is not promoted well in schools.

Prof. Pontiano Kaleebu the director of the Uganda Virus Research Institute (UVRI), noted that organising such events is way of stirring the government policy of prioritising and promoting science subjects in Uganda's education system.

"We want to see young Ugandan scientists emerging who can deal with the health issues in the country and as Africa a whole. This will help young scientists to be able to link basic science to the field and the clinic. That is why we interest students who have completed their senior six exams," he explained.

He added that to achieve this important goal of training emerging scientists, there is need to interest a lot of young people into science so as to get the best ones.