Farmers across the country are decrying the very low prices for their maize, which have, on average, fallen to sh200 per kilo. Farmers New Vision interacted with said this renders their hard labour and investment worthless.

Francis Muwaya, a farmer in Nakibengo, Kakiri, Wakiso district says he might not register any profit from his maize even after planting more than 10 acres of it.

"I borrowed money from our village saving scheme to grow maize in the hope that I would make a profit after selling and repaying my loan. However, at sh250 per kilo, I may not even recover the money borrowed. I basically seem to have laboured for nothing," he painfully states.

Muwaya is not the only farmer grappling with this pain. In the southwestern district of Ibanda, Haddija Ssenyonga says: "I am stuck with over 20 bags of maize in my store. I will wait until prices goes up."

"As farmers, judging by the seasons and inconsistencies in the rain patterns, we are likely to face the same problem for a long time," says Thomas Guma Bufunda, a division chairperson in Ibanda.

The story is not different in Mityana district. The LC 5 chairman, Joseph Luzige even petitioned President Museveni during his visit to the district last week. He said that currently, farmers are no longer benefiting from this crop because the prices are so low and continue going down. "A kilogram is going for around sh200 or sh250 at the farm and the middle men are making a killing because they go and sell at higher prices in Kampala; leaving the local farmers in tears," he said.

He also asked the government to find ways of stabilizing the prices. Museveni advised farmers not to grow only maize as a cash crop but also other crops. He explained that stabilizing prices of agricultural products was vital because the cash crops were only two; cotton and coffee. He said today, farmers have to find different crops to grow on limited spaces of land but yielding a lot of money. Among these, Museveni mentioned onions, mushrooms, oranges and others.

The fall in prices is usually attributed to bumper harvests across the country. Peace Kiconco, a farmer in Kanungu district, said unlike last year, many people had good harvests of maize.

"Almost every family has harvested considerable quantities and this has unfortunately worked against farmers in regard to price. Personally, I have resolved to store my maize at least until the prices improve. I can't afford to sell for peanuts," she stated.

In Busia, a kilogram of maize in the village markets goes for sh250. It is slightly higher at sh350 in town. Farmers want government to intervene. 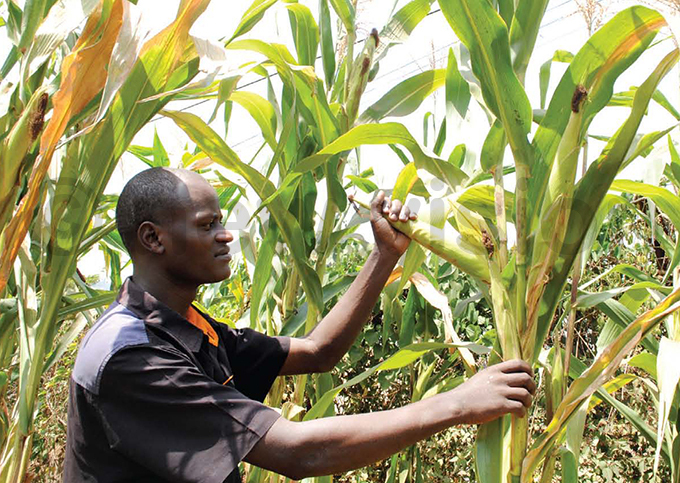 Kasifa Nekesa argues that agriculture will not help if government doesn't come in to protect farmers from being exploited. John Wafula suggested that government should set up stores where farmers can keep the produce and wait for favourable prices. Michael Mukisa, another farmer, said it was unfair for agriculture to benefit only the traders who buy and stock the maize but not the ordinary farmers that toil in the gardens.

David Luwandaga, a market information specialist at Farm Gain Africa, describes the situation as pathetic. "This is not the first time it has happened. It is usually the case when there is good rainfall across the regions," he says. "And the situation is bound to get even worse considering some regions; for example in the north where they are just starting to harvest. Even Kenya where most of Uganda's maize is sold has had a bumper harvest. This only means that they won't be taking as much from Uganda. The only viable solutions are for many Ugandan farmers to devise means of adding value to their maize."

Luwandaga also suggests that more research be made so we can industrialize more on such commodities and produce other products like starch rather than just food. He believes more alternative products with greater value would help maize farmers fetch more from their produce.

He also urges farmers to always seek market information regularly so this can enable them plan accordingly and avoid making losses.

Frederick Ngobi Gume, the State Minister for Cooperatives, advised farmers to form groups and sell their maize in an association rather than do so individually. This shields them against exploitative middlemen, he said.

"We are encouraging these farmers to embrace the warehouse receipt system. This is where they take all their produce to a warehouse and are given a receipt. This receipt becomes their collateral and can be taken to a micro-finance lending institution or village saving scheme and borrow money which can take them through another production chain without financial stresses," he says.

The minister says farmers shun the warehouse receipt system because they fear to go through the entire maize production chain without money. So, they end up selling off their maize to middlemen at flowering stage.

"We tend to leave farmers to go through the production chain without help and many get financially exhausted along the way. When they run to the middle man, he dictates the price and the farmers end up toiling for nothing," he says.

He adds that government has partnered with some private warehouse owners for example in Jinja so farmers can take their maize there and wait till the prices are fairer.

"We have also partnered with the Grain Council of Uganda which has built silos in some parts of the country so farmers can store their maize there. The council can be able to purchase the grain, grade it and export at a much better price hence benefiting the farmers," he said. "I would like to encourage farmers to embrace value addition. Through cooperatives, farmers can add value to their maize such that they don't export grain. They should endeavour to turn their grain into flour because this fetches a reasonably higher price. This even gives them advantage to make animal feeds that fetch them an extra income," he advises.

Mubende ambulance kills one in accident

Busia border to close at midnight

Mityana pupils survive as dorm is set on fire

Mubende ambulance kills one in accident

Busia border to close at midnight

Mityana pupils survive as dorm is set on fire