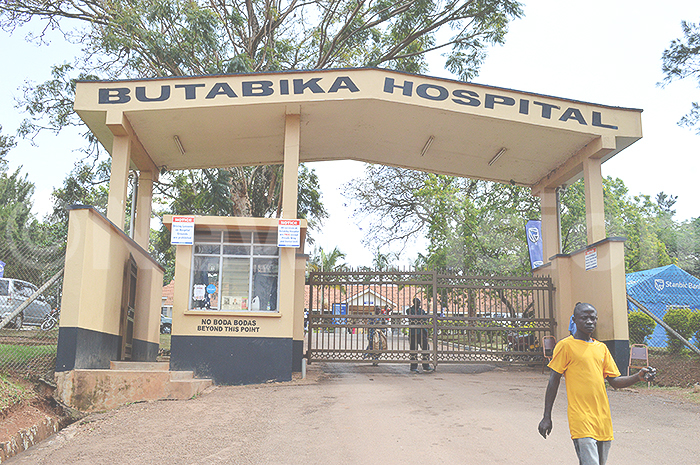 PIC: Butabika hospital admits over 15-25 patients everyday something that increases its number of patients beyond the hospital's capacity. (Credit: Denis Nsubuga)

Currently, the hospital has over 900 patients, almost double its capacity of 550 patients, according to David Basangwa, a senior consultant Psychiatrist and Executive Director of Butabika hospital.

"The numbers are very high considering that we provide everything for our patients. Every day we admit 15 to 25 patients," Basangwa told their visitors during the Tuyambeko Ku Butabika (Let's support Butabika) campaign on Thursday. Basangwa decried the stigma towards people with mental diseases, saying it contributes to the bigger problem.

"When patients are brought here, their people rarely take care of them. People don't want to associate with them," he said, adding that as a result, many times when patients are discharged, they come back because they are not helped to heel well by their would-be caretakers.

'Tuyambeko Ku Butabika' is a campaign by Drugs Hapana, a drug abuse awareness and prevention Initiative. 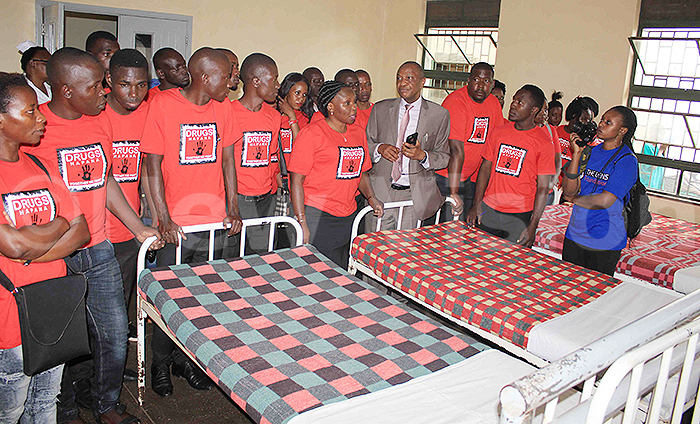 The campaign has mobilised several resources and items which were handed over to the hospital during the visit. They included 190 mattresses, 100 blankets, Maize floor, beans, and 10 bags of sugar. Others were 30 boxes of soap cream jelly, bed sheets, and 30 boxes of sanitary pads, among others.

According to Anne Ssebunya, the spearhead of the initiative, the items were raised through crowd sourcing from various individuals, schools and organisations. Parliament of Uganda, also offered 100 mattresses.

Ssebunya said she started the campaign due to the influx of patients at the hospital, as part of the activities of their initiative, Drug Hapana that creates awareness on the dangers of Drug Abuse among the youth.

Basangwa highlighted the vice of drug abuse as one of the major contributers to the growing population of the hospital, with more than 30% of the admitted patients as a result of drug abuse. He also revealed that these are mainly the youth.

"Whereas we have all ages and different groups, most of our patients are a result of drug abuse and 60% of these fall in the age bracket of 18 to 30 years old," he said.

Alice Kabakwenuzi, the nurse in charge of the Alcohol and Drug unit, said majority of the population at the facility are Alcohol and Marijuana addicts, although with increasing cases of Heroin and cocaine. 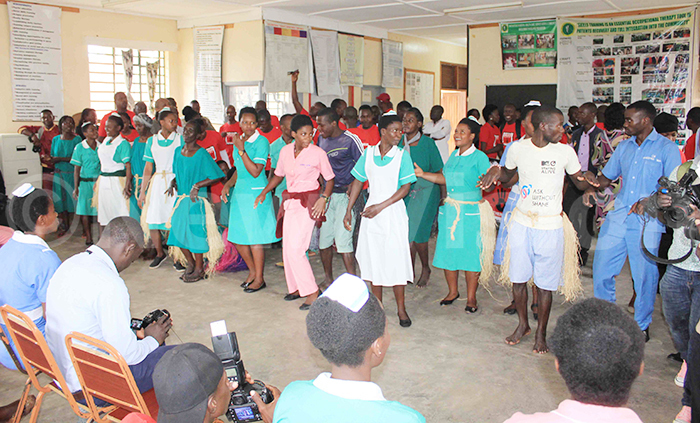 Mental health patients, together with some medical people of Butabika welcome visitors with a dance during the donation. (Credit: Denis Nsubuga)

With the increasing space issues, Kabakwenuzi said they are forced to manage some as outpatients, which is very challenging in terms of treatment.

She said majority of their patients are university students, which she attributes to age, peer pressure and desire to fit in and laxity of parents towards their children's upbringing.

These are some of the issues tackled by Drugs Hapana, a three-year old initiative, where they sensitize youth on the dangers of drug abuse through schools and community outreaches and advocacy trainings.

Ssebunya said they take former addicts to talk about their experiences with children.

"The biggest problem is that a lot of the young people have misconceptions and lies about the drugs," she said.

Basangwa and Ssebunya concur that if the children are not prevented or sensitised about the dangers, it is very easy to fall prey of this dangerous scourge.

"It should be a concerted effort among the parents, teachers and the community to prevent youth from spoiling their future," Ssebunya said.