Bishop Oyanga passed on last Sunday from St Anthony hospital in Tororo district where he had been receiving treatment.

"The President learnt with great shock of the death of our father, bishop Emeritus Joseph Oyanga who passed on last week, he is now out of the country but in solidarity with you," said Engola. 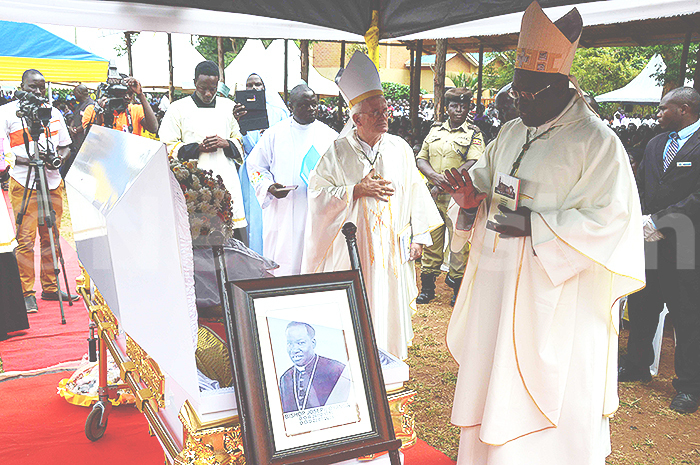 Christians and fellow religious leaders send off Bishop Onyanga on Thursday. They prayed for his body before the birrial.

Museveni contributed a condolence Sh10m to Lira diocese to cater for the burial expenses.

Others were Tororo diocese Bishop, Emmanuel Oboo who led the delegation of clerics and Christians from his diocese where late Oyanga stayed during his retirement until death.

Bishops from other denominations also attended the ceremony including Bishop John Charles Odur Kami of Kitgum Church of Uganda diocese, Fr. Emmanuel Oruk of Orthodox Church among others.

Among other dignitaries include the Ugandan Ambassador to Ethiopia and permanent representative of Uganda to the African Union, Rebecca Amuge Otengo, the commissioner of parliament Cecilia Atim Ogwal, Oyam district Woman MP Santa Alum Ogwan and her Lira counterparts, Joy Atim Ongom.

Giving the sermon to the mourners, Lira bishop Joseph Franzelli commended Oyanga for the various achievements he has made to Lira diocese as the priests and the bishop for 14 years.

He said Oyanga lived in faith and stocked to his vocation even after his retirement until his death and urged who are called God to follow his legacy and work for Christ diligently.

His address, the Tororo Bishop Emmanuel Oyango Oboo told eulogized the fallen Bishop Oyanga as the most hardworking man of God who contributed a lot to Tororo archdiocese by establishing schools and catholic parishes

"In his retirement Oyanga did not rest, when am away he would take good care of the diocese and update me on everything, he was a God given leader," Oboo eulogizes Oyanga.

"As Uganda Episcopal Conference, we are shocked by dismiss of Bishop Oyanya, the person who worked tirelessly hard for this diocese of Lira and Uganda entirely. We therefore, stand in solidarity with Lira bishop Joseph Franzelli, the relatives, friends and the Christians in this diocese during this trying moment," Bihop Odama reads the message to the moruners.

Bishop Oyanga was born in Feb 1936 in Omararii village, Omoro sub county in Alebtong district, ordained priest in 1963, a rang he served before being appointed the Lira bishop where he served from 1989 till December 2003 when he retired.