MPs accuse Kasaija of misleading them over...
Next Story

Shima Naoyuki and Bishop Reuben Kisembo during the tour of the dormitory. Photo by Geoffrey Mutegeki

In a bid to support the girl child education in Uganda, the Japanese government has constructed a $93,469 (sh343m) girls' dormitory at Kahinju Secondary School in Kabarole district.

The dormitory which has been equipped with beds, furniture, mattresses and also connected with solar power will accommodate at least 200 girls.

Kahinju which is a Universal Secondary Education (USE) school has a population of 1,250 students where 557 are girls.

Majority of these girls walk long distances and normally face harassment along the way which has led to poor performance and dropout according to Shima Naoyuki, the coordinator for economic cooperation at the Japanese embassy.

During a press tour at the school on Wednesday, Naoyuki noted that the government of Japan constructed the dormitory in order to reduce the risks of dangerous commuting and provide better learning and living environment for the girl child. 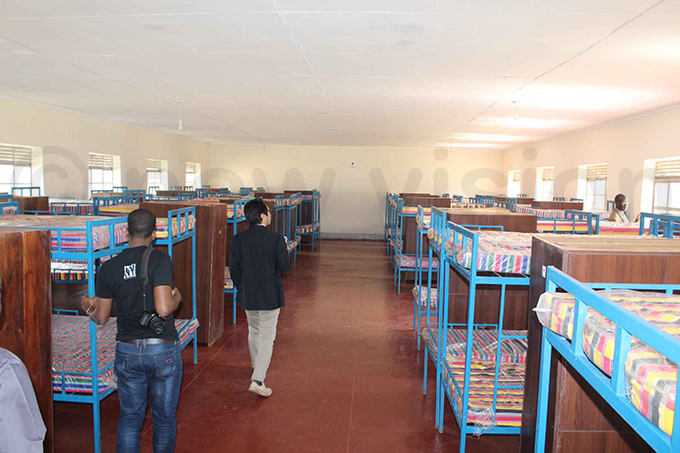 "We came in to support the girl child because education is one of our priorities in Uganda. Besides such long distance made students exhausted and contributed to poor performance," Naoyuki said.

Bishop Reuben Kisembo, of Rwenzori Anglican Diocese commended the Japanese government for its continued support towards improving education in Uganda.

"Every step towards uplifting the girl child must be appreciated and I we thank the Japanese government for supporting this school with a girls' dormitory," Kisembo said.

He noted that the Japanese have not only supported Kahinju but also other education institution at primary, secondary and vocational level.

The Bishop implored parents to take on the responsibility of ensuring they provide the school requirements to their children and support them with food.

"We can't take away the parents primary responsibility of feeding their children as the church. I call upon all parents whose children will be accommodated here to feed them," Kisembo said.

Lilian Olimi, the school head teacher termed the project as a big support to the girl child and said it will most likely reduce on drop out.

"In first term 25 girls dropped out and every term we lose almost the same number. This is a very big support to the girls who have been walking long distances to come to school where many are swayed," Olimi said.

She believes that because of the dormitory there will be improvement on the girls' performance since they will have more time to concentrate on the books. The school will start admitting girls in the dormitory at the beginning of third term in September.

"First priority will be given to girls in candidate classes and those who come from very far," Olimi said. 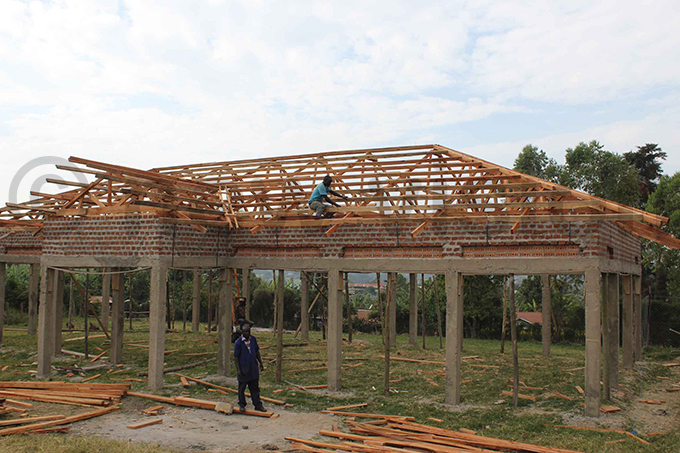 The dinning hall under construction. Photo by Geoffrey Mutegeki

According to Clovis Kyalimpa, the Rector Rwengoma Church of Uganda Parish where the school is located, girls who will be accommodated at the school will pay at least sh50,000 per term.

Kyalimpa said the diocese is considering building another dormitory so that in future they can accommodate up to 500 girls.

"Our next challenge will be feeding these girls, however we have enough land and would in future build another dormitory here," Kyalimpa said.

The diocese has supplemented the project by building the dining hall and the matron's house which are about to be completed.

Japanese support to Kahinju is part of the Grant Assistance for Grassroots Human Security Projects (GCP) scheme aimed at supporting community development in bid to uplift the livelihoods of people at grassroots level.

Initiated in 1992, the scheme has so far seen a total of 235 projects worth $18.4million implemented in Uganda. Fifty-nine of these have been implemented in Western Region.

I always walk three kilometers to school but there are some my friends who walk up to six kilometers. This affects our concentration in class because you are always worried of the journey home and when you reach home you can't even revise because you are tired. I'm so excited about this dormitory which will help us the girls.

The new dormitory will help girls concentrate on books and this will enable us compete with the boys. It will also save us from the boys who always harass us when walking home. I always walk 4kilomters and my prayer is to be among the people to be admitted first.

As boy I feel we also need to be helped because we also walk long distances and get tired like the girls. On the issue of girls being disturbed by boys, I think it is boys who are always in trading centers not us.

They have done good to construct the dormitory for the girls but also boys need such support. Me I'm renting but it is expensive, if they can construct a dorm for us it will be cheaper and I will be living with other students and be able to concentrate on books.