Scientists report setbacks in quest for AI...
Next Story

'India's relationship with Uganda has grown over centuries' - Modi

The event in Kampala was also attended by President Museveni.

In his address, the Prime Minister said he felt a sense of belonging with the Indian Community in Uganda.

He said the presence of President Museveni at the event shows his love for the people of India, and the Indian Community in Uganda.

He also thanked President Museveni and the people of Uganda, for the honour to address the Parliament of Uganda on Wednesday.

The Prime Minister said that the relationship between India and Uganda is centuries old. He recalled the historical links between the two countries, including the struggle against colonialism. 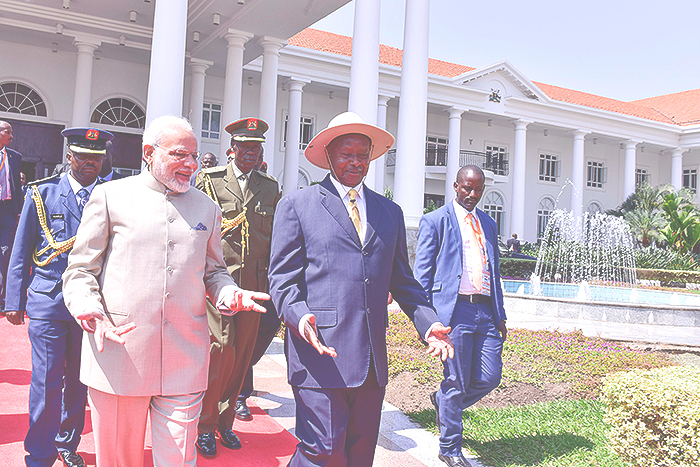 The Prime Minister also asserted that all countries of Africa, including Uganda, are important for India.

He said today India is among the fastest growing economies in the world. He said India is now exporting cars and smartphones.

He said digital technology is becoming a means of empowerment for the people of India; and the country is emerging as an important centre for Startups: 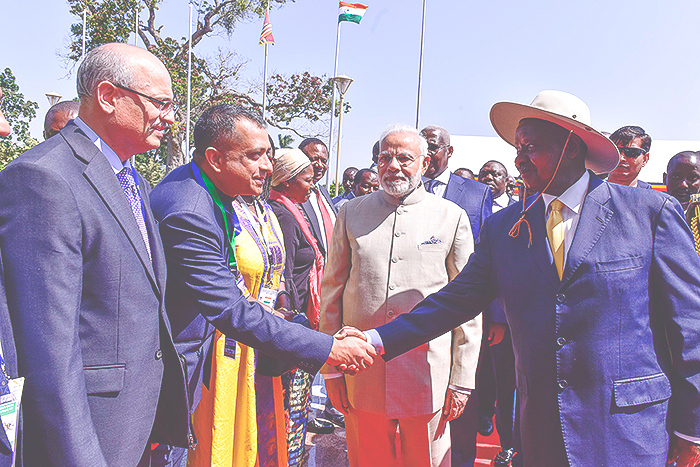 
Modi's speech to the Indian community in Uganda

His Excellency President Museveni, Respected delegates and Members of the Media;
it is my good fortune that after two decades, I have come to Uganda for the first bilateral visit of the Prime Minister of India.

President Museveni is a very old friend of India. I too have a very old introduction to them.

When I came here as Chief Minister of Gujarat in 2007, the sweet memories of that trip are still fresh. And today I express my heartfelt gratitude to the President for his generous words, and for our warm hospitality and respect.

Training, Capacity building, technology, infrastructure etc. were our main areas of cooperation. In the future, we will continue our cooperation in accordance with Ugandan requirements and priorities.

As an expression of our friendship with the Ugandan people, the Government of India has decided to gift Uganda Cancer Institute, a state-of-the-art cancer therapy machine to Kampala.

I am happy to know that this machine will not only meet the needs of our Ugandan friends but also the friends of East African countries.

In Uganda, we have approved two lines of credit proposals of nearly two $200m for the development of agriculture and dairy sector.

It is a matter of satisfaction that our cooperation in the defense sector is moving forward.

Our cooperation in military training has a long history. We are ready to strengthen this cooperation further.

We have also decided to give vehicles and ambulances to the Ugandan Army and for civil works. Our relations in Trade and Investment are getting stronger.

Together with the President, I will get an opportunity to discuss with the leading business leaders of both countries to give more emphasis on these relations. 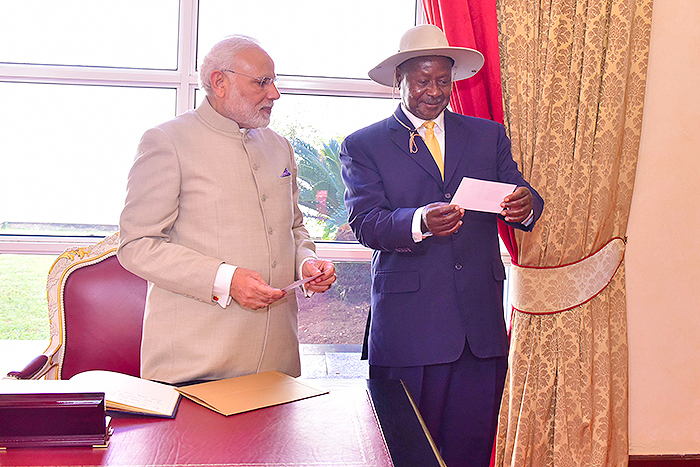 I express my heartfelt gratitude to the President for the affection of the Indian-origin society living in Uganda.

After a difficult time, in the efficient and strong leadership of President, today the Indian society is contributing a lot in Uganda's social and economic life.

I am happy that in the evening this evening, the President will join himself in my program with the Indian-origin society.

I congratulate him on behalf of the whole of India for this special gesture.

Tomorrow morning, I will get the good fortune of addressing the Parliament of Uganda. I am the first Prime Minister of India to get this privilege.

For this special honor, I express my gratitude to the President and the heart of Uganda's Parliament.

India and Uganda are both young people. Both governments have the responsibility to fulfill the aspirations of the youth.

And in these efforts we are fully committed to cooperating with each other. From the hundred and fifty million Indians, I wish all the best wishes for the progress and prosperity of Ugandan people.

Where your presidential candidate will be today