Navio thrills Indians at launch of "NAMO" ...
Next Story

“The migrants from Congo eat primates. They are now beginning to influence our local people’s preference of meat,"Drani.

“The migrants from Congo eat primates. They are now beginning to influence our local people’s preference of meat,"Drani.

BUNYORO - In Bunyoro and Rwenzori sub regions in Uganda a chimpanzee is revered. The Bayanja clan of Bunyoro, and Batanyi clan of the Bakonzo have the chimpanzee, as their totem (sacred symbol) plus taboos against their killing.

But, these great apes that are over 5000 in Uganda, the highest number in Africa are threatened by cultures that protect them, fast fading away.

A recent study conducted by The Cross-Cultural foundation of Uganda (CCFU), found population growth especially that of migrants, posed a great threat to the existence of chimpanzees.

According to Emily Drani a researcher and Executive Director CCFU, in some communities in Bunyoro and Rwenzori sub regions 80% of the inhabitants are now migrants and only 20% indigenous.

The study also found that the migrants are mostly from Rwanda and DR Congo; do not share the same cultural values as the indigenous people.

They will clear bushes, cut down trees, encroach on forests and threaten wildlife without caring about the consequences.

"The migrants from Congo eat primates. They are now beginning to influence our local people's preference of meat which is a problem and has a negative effect to efforts to conserve the apes," Drani explained.

Also found to pose a huge threat to conservation of the great apes and the environment are the investors.

"Investors are cutting down trees and clearing large areas of the forests for plantations and destroying the natural habitats of these chimpanzees."

Budongo forest is among the many found to be degraded and face more destruction.

"We have chimpanzees roaming around the area because their habitat has been destroyed and now they come to homesteads also looking for food," he says. 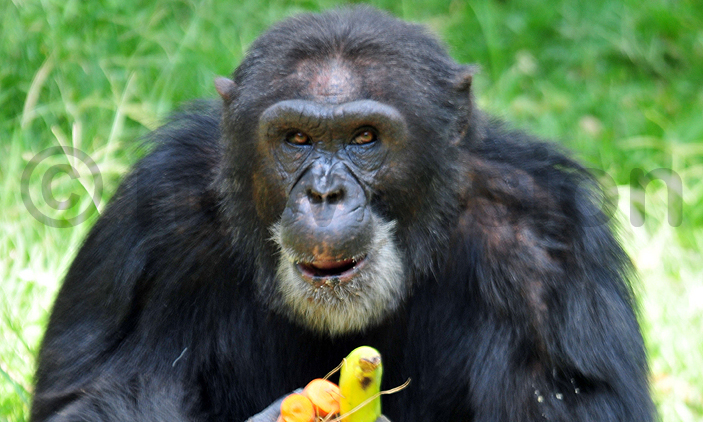 Zakayo the late. Uganda's oldest chimp. He pasted on this year. Many primates are feasted on as meat by migrants and Investors something that cripples mother nature and wildlife. (File photo)

Religion has also brought a bad influence on conservation, people do not want to be associated with their traditions, and relate it to witchcraft. "But we are first our traditions, then our religion they go together." Mayanja says.

The study also found that young people are not home to learn of their traditions some of which promote conservation.

It found the transition of knowledge does not happen from the old to young generation who in turn are not able to appreciate their environment and that would promote conservation of great apes.

In the urban setting there is even less appreciation of nature and conservation because of diversity of cultures.

Drani says conservation of great apes is under threat from erosion of culture, social growth, oil and mineral wealth exploitation which is all putting the existence of the great apes under threat.

What should be done?

The research carried out in Bunyoro and Rwenzori sub region aimed to establish the extent to which culture can contribute to conservation of great apes in Uganda especially the chimpanzees.

Grace Aulo commissioner tourism in the ministry tourism, wildlife and antiquities says a mindset change towards culture, is crucial in promoting conservation in today's changing world.

Drani emphasized that cultural institutions need to reclaim their role to impart indigenous knowledge and value plus help the people in Uganda to protect their heritage and engage in conservation.

But, also important is for literature on culture's that promote conservation to be generated.

Culture aside the need to strengthen partnerships among private forest owners, conservationists, local and national leaders to have a common agenda and work towards the same goal of conservation was also fronted.

This is in addition to the need to hold investors accountable to stop destruction of forests.

The former Executive Director Uganda Wildlife Authority (UWA), Dr. Andrew Seguya, says in the past in protecting forests, they were very militaristic.

However as of today UWA has transitioned to involve community participation. "The people around the forests are allowed access to forests with permission to get herbs, or for spiritual purposes," he says.

Drani says important is to have more people involved in conservation not because its law but because it's part of their tradition.

"The Strength of conservation should be on values in that even if there is no law people know they have a duty to conserve nature. Conservation is about caring, in that you don't destroy forests or kill animals," she explains.

Chimpanzees are a tourist attraction and tourism is targeted to earn $2.7 billion annually for Uganda.

A 54th bash for Mugenga