PIC: Bahika and the girls during breakfast. (Courtesy photo)

KABALE - Grace is an attribute that God never gave to most of us but it seems most of it was given to one woman-Ruth Bahika the lady putting together the broken pieces of most destitute young girls in Kabale.

Born to Rev. Can James Ndyabahika and Rev. Can Grace Nyonyozi Ndyabahika in the early 80s in Chicago, Ruth was raised in Chicago, Scotland, Kampala and Kabale as her evangelical parents were serial globe-trotters.

She attended Bishop Kivengyere Girls Muyebe and Makerere College school for her O'level, high school in Boston Massachusetts, Wheelock college and North Eastern University where she graduated and mastered in child psychology, a profession she practiced for years in the United States until 2012 when she chose to come back to Uganda to touch girls' lives.

According to district statistics, these numbers continue to rise.

Traditional ways of caring and sharing that were strong enough to support orphaned or hungry children and defend the abused are shaken by economic and social change, and disease.

The AIDS epidemic, rural to urban migration and other factors have left huge family gaps in their wake.

Too often, one ﬁnds a widowed old woman who has lost all children left with a dozen grandchildren in her care.

Extended family members who would have normally intervened according to tradition rarely help anymore for fear of stigmatisation, or they simply cannot because of abject poverty.

Rescuing the girl child is a huge opportunity for change, as statistics and history show that an educated girl is likely to invest 90% of her future income in her family compared to 35% for a boy.

At the revelation of such misery in her home district of Kabale, Miss Bahika relentlessly embarked on her project in March 2013.

In her head, she was going to look after just a few orphans but fate had it that now up to 215 vulnerable, orphaned and abandoned girls are being taken care of under the Grace Villa project located in Makanga, Kabale town. 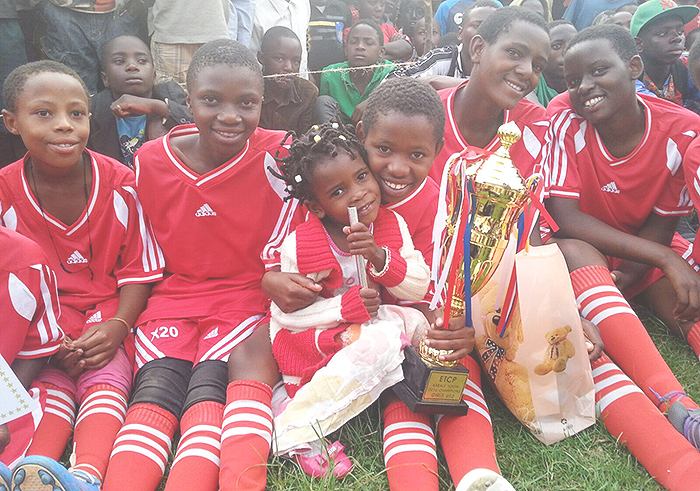 The girls after winning the youth tournament in Kabale.(Courtesy photo)

Grace Villa home for girls is a warm family setting that rescues orphaned and endangered girls between ages of 3 to 21.

The ﬁrst course of intervention is to empower and enable extended family members to welcome and care for these orphaned girls in their homes.

For children who do not have  a safe, extended family, Bahika is happy to provide a home.

Today, there are 24 girls living with her. Over 200 girls are supported externally and are enrolled in the different Grace Villa programmes.

It was all a dream

In 2010 a documentary called ‘Invisible Children' about the Ugandan war load Joseph Kony's treatment of children in Northern Uganda wentviral.

US President, Barack Obama at the time even signed The Lord's Resistance Army disarmament and Northern Uganda Recovery act of 2010, one of the reasons the LRA is no more.

Bahika went to do some volunteer work in Gulu in 2011 and later realised it wasn't any different in Kabale so that's when she switched gears back home.

"After seeing what was happening in Gulu, I was forced to go find out about the situation in Kabale only to find the situation equally worse.

"Poverty, rape, HIV and neglect were at an all-time high it made me cry for days.

"I met a little girl who saw both her parents get murdered in front of her and her much younger sister and literally had no one to turn to and I couldn't help but sob the more.

"As I paid more attention, it got so real for me and at that moment I knew I had come home for good."

Bahika set out to counsel, rehabilitate and nurture the much mistreated girl child in her home town.

Elizabeth, aged six, a double orphan and Annet, 14, a runaway who was forced to marry a man she didn't know after her mother had already spent her bride price) were her first girls at her Grace Villa project.

‘'Over 200 Grace Villa girls are enrolled at Primary and Secondary school levels.

"Phiona Kiconco, one of the girls,  was recently enrolled in Bachelors of Business Administration at Bishop Barham University here in Kabale.

"We give them school fees and all essential related material, homework assistance, tutoring and constant supervision.

"They have full access to our computers and the books in our library. We are also actively involved in the school PTA's," she said.

Girls who are still at primary level are all at Kabale Primary School, secondary girls are at Trinity College Kabale, Kabale Secondary School and Alliance High School in Nansana as these are some of the schools that give the girlssubsidised fees structures so the girls can keep in school.

Five girls have managed to join St Mary's college Rushoroza because of their soccer talent.

Fourteen others from Senior three and above have been identified and are currently undergoing an online computer course in programming and coding at UDACITY, a celebrated Information Technology School in Cambridge Massachusetts.

Bahika attributes all this to the friendships she made while in school in Boston. She adds that she pays up to sh94m every term.

She says;‘'We offer after-school and holiday programmes in IT, photography, baking, etiquette, tailoring and music.

"Our library and computer room is accessible to all vetted girls in the community, not just the ones under Grace Villa."

The project is also dispelling athletic biases against females. Over 60 girls are on the Grace Villa Soccer Academy and are currently the champions of Kabale District Youth Football Championship cup for three years in a row since 2016.

The phenomenal Bahika delightfully speaks; "We have a large soccer pitch within our walls, providing a safe environment in which the girls explore their abilities, exercise their bodies and minds, enjoy the camaraderie of playing in a team with friends and peers and learn healthy competition and responsibility.

Members of the team receive full tuition. All of them receive books, pens, pencils and sanitary pads to see them through the year.

They are also served a nutritious meal after each practice. We meet every Saturday without fail." 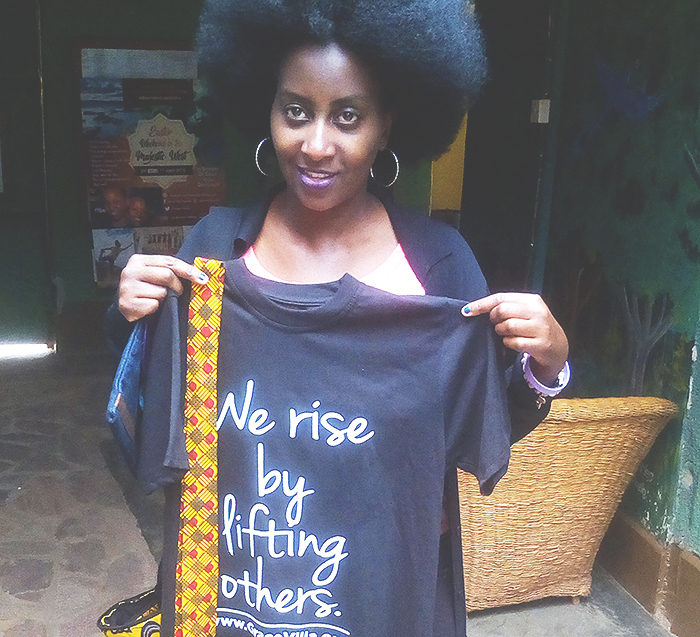 Bahika's main challenge is the number of girls who keep coming in search for  shelter and food yet she doesn't have enough finances to take care of all the disadvantaged girls in the Kigezi region.

She says; "We have nearly starved so many times but we thank God that whatever small food we get we share.

"Our neighbours have been very kind and we often get help from the locals. I want my girls to grow knowing that they were helped by their fellow Ugandans and not donor money."

Bahika has knocked on several doors for her girls and most times failed but at times succeeded but no, she doesn't depend on handouts.

She opines that they strive to be a good example and instill good habits of self-reliance, creativity and independence in the girls.

Instead of enabling them, they equip them to thrive long after they leave the Grace Villa walls.

"It became apparent that Grace Villa could not exist in the capacity we wished by simply fundraising. Soon, we found ourselves seeking creative ways in which to generate income so as to effectively implement our different Grace Villa programmes," she says.

She says they started by incorporating a sustainability and income generation aspect into the skills development that they teach the girls, from growing food for their own home consumption and to sell, tailoring their own clothes, re-usable sanitary pads and school uniforms as well as items for sale and baking not just their own bread but to sell to the public too.

Through Kikazi the girls create unique products out of African kitenge cloth such as laptop bags, table mats, jewelry and clothes.

The girls feel good because they know that they are paying part of their own school fees through things they make themselves.

Worth mentioning as well is that recently, a unique sustainable development opportunity presented itself to Grace Villa in the acquisition of a popular back packers spot called formerly called Edirisa just down the road from where Grace Villa is located.

Bahika has already rebranded it ‘Kwanzi' a name from Orukwanzi which means beads in the native Rukiga language.

It has been remodeled as a museum hence a place for tourists, a backpackers' lodge, a coffee shop and a shop for the products that the girls tailor.

Bahika reiterates that this place will benefit the Grace Villa home for girls, equip them to grow stronger so as to continue playing a major role in the transformation of the lives of girls and their families and communities in South Western Uganda and beyond.

Number of Children and Youth served:

40% are total orphans and live with a relative (mostly Grandmothers, Aunts) or other caregiver

100% are marginalized or destitute.

What the girls say about Bahika

I have been with Aunt Ruth for two years, I came here because I had nowhere to stay after my mother dumped me at my grandmother's house in Kabale town who also threw me out.

A good Samaritan brought me to Grace Villa and ever since my life changed. Now I have an education, a shelter and food to eat. My mum has never come back looking for me but. I am now a good tailor and I am proud.

I came to Grace Villa in 2015 when I was only seven. I want to thank Aunt Ruth for taking me to school.

I know it is very hard but she all she has shown me is love. I even now know how to use a computer and saw my own clothes. She is my angel.

Aunt Ruth has taught me everything I know. I have very many sisters now who love me something I never thought I would ever have.

She has given me a home to belong. I pray for her every day. I have learnt how to sing, dig and play football because of her.

I was living with my step brother who wanted to sleep with me several times so I had to seek refuge after I refused all his advances and tried raping me. I have been here three years now and I feel safe.

Aunt Ruth is not even human; she is an angel sent from heaven. I am the best tailor here, I even make re-usable sanitary pads for my fellow girls and soon we shall be selling.

Kampala-Jinja Expressway tender to be advertised in May