The travelling Ugandans served an on-the-edge-of-your-seat performance in the 7-6 triumph against Luxembourg.

The travelling Ugandans served an on-the-edge-of-your-seat performance in the 7-6 triumph against Luxembourg.

PIC: Allan Amone between the sticks for the Lacrosse Cranes. (Courtesy photo)

JERUSALEM - The Uganda Lacrosse Cranes have already declared themselves heroes after playing six games in the  ongoing  World Lacrosse Championships in Israel.

But, with just one win from the six games, is this a heroic attitude a case of having their heads in the clouds?

For a fair number of lacrosse enthusiasts back home, making an appearance alone at the world stage is quite satisfying.

Uganda is the sole Africa representative at the global meet and what a grand advert for the boys who have risen from nothing to something special in the confines of the game.

Their status at the meet can as well be interpreted in form of Uganda being a power house on the African continent.

"You cannot underestimate what we are having here in Israel. We are already heroes and ofcourse not desperate for apptroval" said Liberty Twesiime, a team member and as well Uganda Lacrosse publicist. 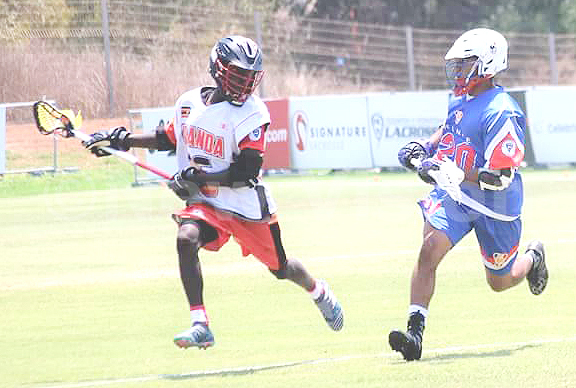 It is understood that getting a win in a championship of this magnitude is no mean feat and certainly Michael Bahizi and Co have something to feel proud about.

The travelling Ugandans served an on-the-edge-of-your-seat performance in the 7-6 triumph against Luxembourg, creating one of the best Ugandan moments at the event that has attracted 46 teams.

In a more realistic manner, Uganda is still low on stick skills and technical attributes to impress at this level. Conversely their athleticism remains such a striking asset for the team.

For the moment the task at hand is to fight for positions between 27 and 32 in the highly competitive contest. Losing five games means they did not qualify for the knock out stage.

Uganda hopes for a better finish than in the previous edition when they finished a distant 34 out of 38 countries in the United States.

The game back home has experienced a turnaround courtesy of the Uganda Lacrosse Foundation and certainly things can only get better.

Fish farming is my gold mineâ€"Mugisha

Fish farming is my gold mineâ€"Mugisha