She has restored administrative structures such as the Parents and Teachers Association.

She has restored administrative structures such as the Parents and Teachers Association.

PIC: One of the classroom blocks Auma lobbied for

Every Wednesday and Thursday New Vision is profiling some of Uganda's Teachers Making a Difference. The 12 most innovative teachers will share a cash prize of sh18m and the five most outstanding will go for a week-long all-expenses paid study tour to Ireland courtesy of New Vision, Irish Embassy in Uganda, Trocaire and Simba Travelcare, one of Uganda's leading tour and travel management companies. Today, we bring you the story of Santina Auma of Nakoreto Primary School, Kotido.

When Santina Auma was posted to Nakoreto Primary School in 2009, it had only four classes, P1-P4. It had been like that since its inception in 1980, but today, Nakoreto is a fully fledged school. John Eremu and Jovita Ajuna write about the extraordinary effort of Auma to turn the school around

Our Toyota Hilux pick-up seems to complain as the driver navigates the bumpy murram road west of Kotido town. The destination was Nakoreto Primary School. Five kilometres on, a slender woman waves down our vehicle. A white handkerchief covers a cannula on her left hand.

"I have been diagnosed with brucellosis and I am on treatment," she explains as she boards the vehicle to direct us to her school. 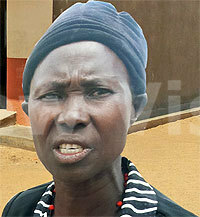 Santina Auma (left) is the headmistress of Nakoreto Primary School. We had been told of the miracle she had done to rescue Nakoreto from near collapse, turning it around to one of the best Universal Primary Education (UPE) schools in Kotido district.

Through lobbying with nongovernmental organisations (NGOs) and other stakeholders, Auma has improved the physical infrastructure of the school from just two dilapidated classroom blocks to over 10 structures today, including staff quarters.

She has restored administrative structures such as the Parents and Teachers Association and recently, established another organ, Education Improvement Committee (EIC) to assist with planning and community mobilisation.

She has put in place a school feeding programme involving parents and opened school gardens not only to produce food for the school, but also to equip pupils with life skills through agriculture.

Being a sports lady, co-curricular activities are taken seriously at the school. Because of her efforts, academic performance has steadily improved and the school enrolment has increased from 150 when she was posted to the school in 2009 to 810 pupils today.

Auma's office is a talking one.

Accountability charts for UPE capitation grants since she was posted to Nakoreto are clearly pasted on the office wall. The latest accountability is on the school noticeboard. The school annual plans and targets are also pasted all over her offi ce wall.

Tasks and targets accomplished are ticked off and challenges indicated as to why certain tasks were not completed.

"Last month, we held our belated end-ofyear party where we recognised the best performing headteachers and Auma was one those awarded," says Kotido district inspector of schools, Carl Max Otim.

"That school had failed to grow. We used to call it a baby school because it had stayed at P4 for 20 years. But from the time we posted Auma in 2009, the school has seen tremendous progress in terms of development of physical infrastructure as well as enrolment.

"It is one of the schools with the highest number of girls because of her determination to improve facilities for the girl-child. Through her lobbying, several NGOs such as Save the Children built dormitories for the girls.

She was attacked several times by warriors who did not want their children in school, but she remained firm and has pushed the school to where it is today. We are very proud of her," says Otim. 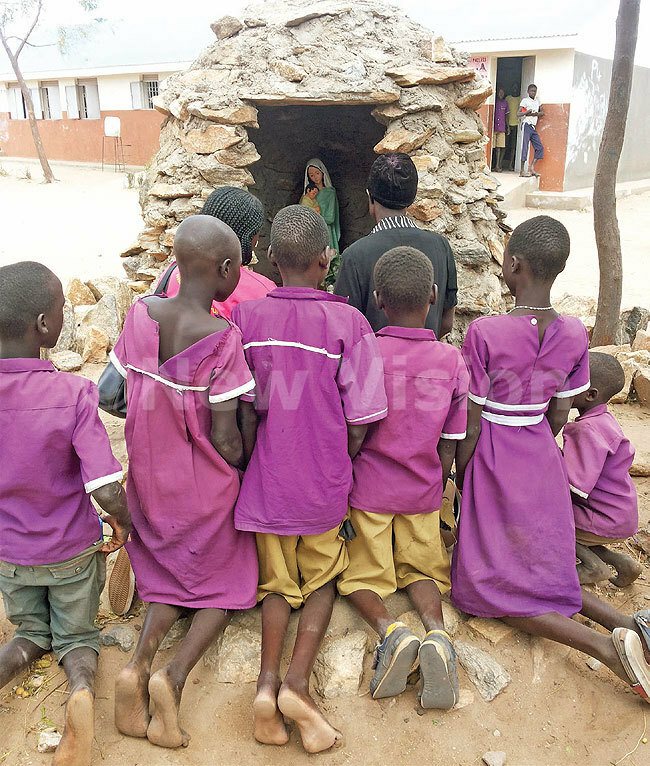 Auma is joined by pupils to pray at the grotto

"She involves us in all the school planning processes and activities. My team is always advising the school and she takes the advice seriously. We are always involved in the planning and evaluation processes," says Adia.

On the school feeding programme, Loyila says their committee has this year gone just beyond the school gardens and mobilised parents to open 40 acres of land to grow food for the pupils.

"We use our ox-ploughs to work on the gardens. We have planted six acres of sorghum that should be ready for weeding in two weeks. Next, we shall plant maize, millet and then vegetables. We want our school to be self-sufficient in food," says Loliya.

The role of the EIC is also to follow up children who miss school for an extended period. This has checked high dropout rate among pupils. In the middle of the school compound is a grotto with the Virgin Mary.

Auma kneels down before the grotto and several other pupils join her to pray.

"This is what has brought us all these blessings. Whatever I want, I pray for and is granted," she says pointing to the grotto. A devout Christian, there is a good reason for Auma's assertion.

When transferred from Nakwakwa Primary School to Nakoreto, Auma found the school in a despicable state. Nakoreto started as a community school in 1980. Though it became government-aided in 1987, it never progressed beyond P4.

"When they brought me here, I knew there was a problem for a school to have stayed at P4 for 20 years," narrates Auma.

"There were only two teachers and two dilapidated classroom blocks. The school had no fence and had become some kind of a community centre where they sold and drunk waragi.

"All the school land had been encroached on and used for grazing. Although the register had 150 pupils, a close scrutiny indicated daily attendance of between 50 and 80 pupils. All the teachers, including the headteacher, operated from town," Auma recalls.

Auma says she decided to analyse the school problems with the two teachers.

"Besides lack of structures and proper accommodation for teachers, the biggest challenge was the negative attitude of the parents towards the school development. I called the PTA executive, but found they were equally negative about the development of the school. So, I requested for election of a new PTA executive that could develop the school. I eventually got many who were my friends and shared my vision.

"We started our work by identifying the challenges, solutions and came up with a development workplan. On domestic animals and trespass on the school land, we involved the local authorities and the subcounty." 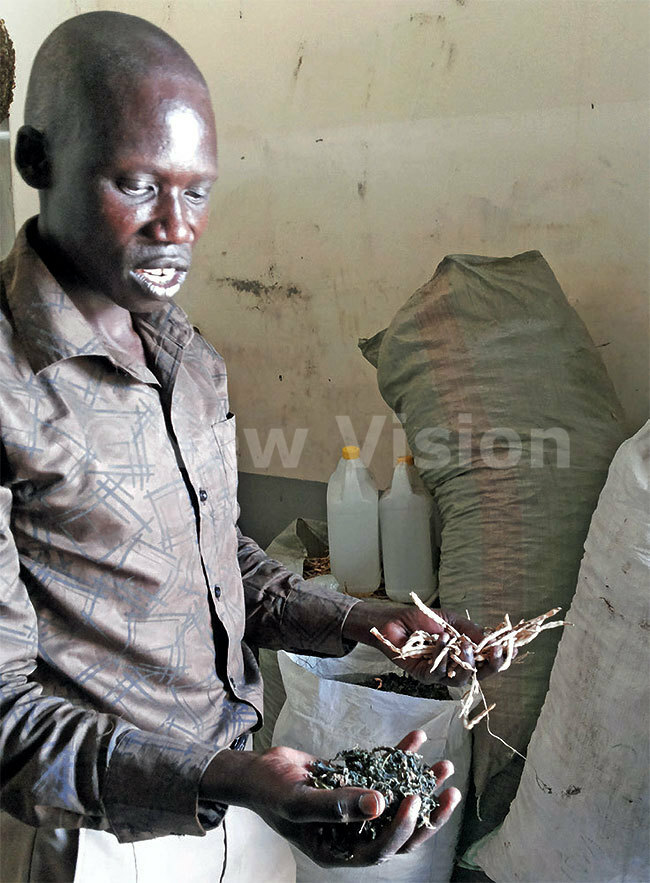 Fast forward, Auma says they started serious lobbying with the district, local authorities, NGOs and church. She also included the pupils in the mobilisation effort.

"I composed songs highlighting the school's challenges. Whenever there was any big occasion in town, even though we were not invited, I would organise the children and go on foot to town to sing," Auma recalls.

She made friends with local authority leaders and implored them to take offi cials from NGOs to visit her school. Auma's relentless effort paid off when one day, an old woman she had met at the mission visited the school and offered to help her upgrade her studies.

However, that when the district presented a bill of sh80m to erect the fence, the woman said she could not afford because she was a mere widow and also a beggar.

"The woman then told me: ‘since you are a believer, I will build you a grotto of the Virgin Mary. Whatever you want, kneel before the grotto and pray to God to grant it,"' says Auma.

Auma says she started praying before the grotto every Saturday with the children and indeed miracles started happening.

"One day, they brought Save the Children and I told them I love my job and requested them to help me develop the school. They looked at me and went back without saying a word," she recalls.

Later, she was told Save the Children had granted the school a classroom block. The charity later built other structures including dormitories.

A mother of four, Auma has adopted and is paying fees for fi ve disadvantaged children as a way of giving back for her education was sponsored by missionaries.

"My parents, like the majority of Karimojong parents, did not appreciate girls' education. So, if it was not for a nun called Lucia who took me to Kangole, I would not have got any education," recalls Auma.

We got the school in a mess. We had to create an environment for learning. The headteacher is very cooperative with the teachers and the community, especially with the executive. She always involves them in school planning and activities.

You will have no problems with her as long as you do what is expected of you. She involves the staff in all decisions, so conflicts are minimised.