Onyango positive ahead of Rugby World Cup ...
Next Story

The 16-man team that leaves Saturday for SanFrancisco, USA for the World Cup received a sh25m dummy cheque from Uganda Breweries.

The 16-man team that leaves Saturday for SanFrancisco, USA for the World Cup received a sh25m dummy cheque from Uganda Breweries.

KAMPALA - "Better performance at the Rugby World Cup in San Francisco, USA will come with more benefits for team Uganda."

Uganda Breweries (UBL) Marketing manager, Juliana Kaggwa assured the rugby Cranes at a send off dinner organised by the company for the team in Kamwokya on Thursday, July 12.

At the same function, the UBL under their brand Guinness  gave the team sh25m pocket money allowances for the team going to USA.

The 16-man team that leaves Saturday for SanFrancisco, USA for the World Cup received a sh25m dummy cheque from Uganda Breweries limitted (UBL) marketing manager, Juliana Kaggwa during a dinner held at the Arena Club in Kamwokya.

While handing over the cheque, Kaggwa said that the sh25m was an appreciation to the team for their performance and urged them to make Uganda proud while in USA.

"We are so grateful to the team performance and also taking Uganda to the World Cup. We are committed to supporting you and we pray that make us proud while in USA," Kaggwa told the team. 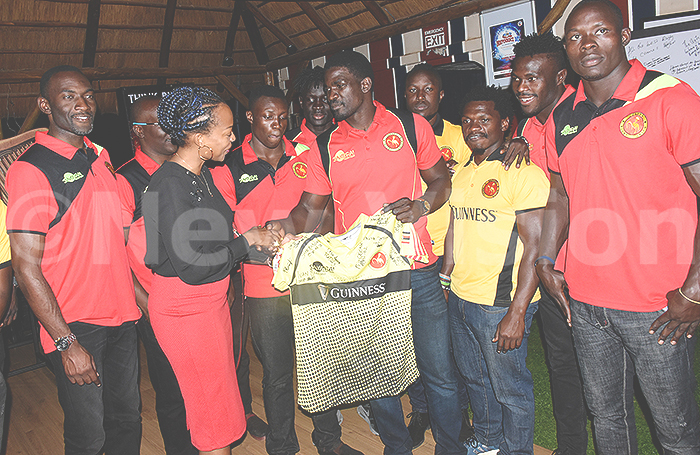 Team manager, Michael Wandera assured Ugandans that the team is focused and determined to keep the Uganda flag high.

"It has been a long journey and going to the world is fulfilling our dreams we had when started this campaign.

"This token of appreciation we have received from Guinness has motivated us further to put up a bigger fight in USA," Wandera said.

Uganda Rugby Union President, Andrew Owor thanked UBL for the support and urged players to keep up the spirit to make Uganda proud.

In pictures: Toto Festival in Mbarara