Animals to be allowed to cross borders soon - IGAD

Stories of clashes among pastoral tribes living in the cattle corridor of Uganda, Kenya, Ethiopia and South Sudan are not new.

Stories of clashes among pastoral tribes living in the cattle corridor of Uganda, Kenya, Ethiopia and South Sudan are not new.

PIC: Moses Kizige, the State Minister for Karamoja, speaks during the the launch of the IGAD Protocol on Transhumance in Entebbe on Wednesday. (Credit: Godfrey Kimono)

"Two herdsmen commit suicide in Turkana after hundreds of their animals died due to drought" was the headline in a local Kenyan daily early last year.

The area parliamentary representative was then quoted as saying: "More lives are likely to be lost as a result of the unrelenting drought unless the government and humanitarian agencies hasten distribution of relief supplies, water and pasture for the livestock."

Stories of clashes among pastoral tribes living in the cattle corridor of Uganda, Kenya, Ethiopia and South Sudan are not new - the centre of conflict usually revolving around water and pasture.

Grazing lands are key to any pastoral community.

The Turkana and the Pokot tribes in Kenya usually enter Uganda in search of water and pasture, especially during the dry season.  And as such, communities in Karamoja region are forced to fight back as they compete for the meager resources.

However, according to the Inter-Governmental Authority on Development (IGAD), such clashes could become history if a protocol on transhumance is adopted by member states.

According to IGAD, Karamoja currently hosts about one million cattle from neighbouring communities, with about three million from the Pokot area of Kenya.

IGAD, which was formerly the Intergovernmental Authority on Drought and Development (IGADD), was founded in 1986 with a focus on development and environmental control, however with political turmoil in the region, with conflicts in South Sudan and Somalia, the organization has been heavily focused on peace efforts and humanitarian work.

The organisation says about 70% of the IGAD region is either arid or semi-arid and yet the horn of Africa hosts the largest pastoral community in Africa, with over 570 million cattle, followed by the ECOWAS region with about 370 million and the SADC region with about 250 million.

And because of the large numbers of livestock in the region and the weather unpredictability, Japheth Kasimbu, an IGAD transhumance expert, says pastoral mobility is unavoidable, whether organised or forceful.

"Without an arrangement where pastoral communities can easily cross borders in search of water and pasture for their cattle, more chaos is inevitable. It is necessary to have a protocol to allow peaceful co-existence, especially because such movements also create many business opportunities for the host communities," said Kasimbu.

"It is important to note that the aspect of free movement of persons, animals, goods and services is key to economic development and the integration of the African continent," he said.

"In the pre-colonial era, people were not confined to physical boundaries and were free to move with their animals wherever they would find free land and water."

The minister added it is hoped that the enactment of the protocol will give rights and obligations to pastoralists from the IGAD region. 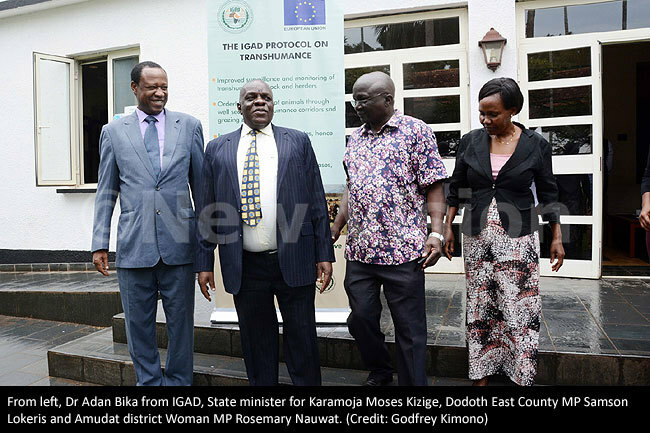