Malinga living to his dream
Next Story

England will bid to end their 28-year wait to reach a World Cup semi-final when they face Sweden on Saturday after Brazil were dumped out in the last eight by Belgium.

Gareth Southgate's young side face the Scandinavians in Samara with a place in the last four against either Croatia or hosts Russia up for grabs.

In the other half of the draw, Belgium will play France in Saint Petersburg next week after Didier Deschamps's side saw off two-time winners Uruguay 2-0 in an impressive display.

With the exits of Brazil and Uruguay, there are no multiple winners left in the competition, while it is the first time in history that none of Brazil, Germany or Argentina have made the semi-finals.

That leaves perhaps the most wide-open World Cup of modern times heading towards the final week, and England manager Southgate has called on his team to take advantage.

"We came into this tournament as the least experienced team -- we were one of the youngest teams in it," he said. "But we said that we're an improving side who want to make our own history."

The 1966 champions edged out Colombia in the last 16 with their first-ever World Cup penalty shootout win after three previous defeats, securing a first knockout-round victory at a major tournament since beating Ecuador in 2006.

"We've already had our first knockout win in 12 years, our first win in a penalty shootout in a World Cup for England, the highest number of goals scored in an individual game (against Panama)," added former defender Southgate.

"We want to keep making that history."

Widely written off, including by their own supporters, before the tournament began, hosts Russia know they now stand just two matches from the July 15 final at the Luzhniki Stadium in Moscow. 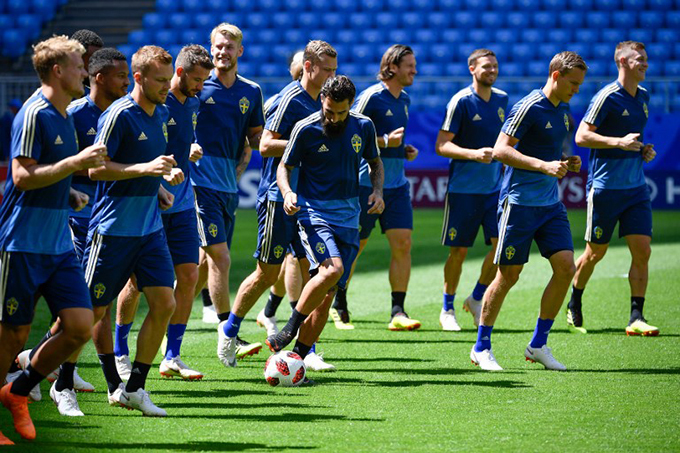 Sweden's players take part to a training session on the eve of the quarter final at the Samara Arena. AFP Photo

An impressive Croatia outfit led by midfield lynchpins Luka Modric and Ivan Rakitic stand in their way on Saturday in Sochi, but coach Stanislav Cherchesov said his side were boosted by the support of President Vladimir Putin.

"President Putin called me before the (last-16) game with the Spanish and after," Cherchesov said.

"Of course when the president supports you, it makes us comfortable. The players know this and it is just an extra boost for us in terms of motivation."

Five-time champions Brazil had arrived in Russia with high hopes of putting the humiliation of their 7-1 semi-final thrashing on home soil by Germany four years ago behind them, but were instead sent packing by a clinical Belgian outfit.

The Red Devils' 'golden generation' had looked on the brink of another major tournament disappointment when 2-0 down midway through the second half of their last-16 tie against Japan, but roared back in that game before punishing Brazil time and again with blistering counter-attacks.

The Selecao piled the pressure on their opponents in a gripping second half, but could only drag one goal back through substitute Renato Augusto's header after Fernandinho's early own goal and a sweet strike by Kevin De Bruyne.

The recriminations for Brazil will start in earnest after failing to reach the final for a fourth consecutive World Cup, with coach Tite sure to come under fire despite being widely praised in the build-up to the tournament.

The defeat means that Brazil's Pele-inspired triumph 60 years ago in Sweden remains the last time a South American side has won the title on European soil.

"I won't talk about my future right now -- it's not appropriate as I'm still thinking about the match. Time will tell," said Tite.

Next up for Roberto Martinez's Belgium is a mouthwatering semi-final with France, who comfortably beat a Uruguay side shorn of the injured Edinson Cavani to back up their thrilling victory against Argentina in the previous round.

"We had done something big against Argentina and today we have again raised our level," Deschamps said. "I have a good team that still has plenty of room for improvement.

"You can see our lack of experience sometimes, but we have so many qualities too."

Climate change is going to worsen migration in Africa