A sombre mood has clouded the elation from earlier in the week, when the boys were found dishevelled and hungry but alive.

A sombre mood has clouded the elation from earlier in the week, when the boys were found dishevelled and hungry but alive.

PIC: A Thai soldier takes some food from a mobile canteen in Tham Luang cave area as rescue operations continue for the 12 boys and their coach trapped at a cave at Khun Nam Nang Non Forest Park in the Mae Sai district of Chiang Rai province, Thailand. (AFP)

A former Thai navy diver helping to rescue a football team trapped inside a flooded cave died Friday as officials warned the window of opportunity to free the youngsters is "limited".

The diver's death raises serious doubts over the safety of attempting to bring the 12 boys and their football coach out through the cramped, waterlogged passageways of the Tham Luang cave.

But Thailand's Navy SEAL commander indicated that rescuers may have little choice but to attempt the tricky extraction of the group, in the first official admission that they cannot wait out the monsoon underground.

"At first, we thought the children could stay for a long time... but now things have changed, we have a limited time," Apakorn Yookongkaew told reporters.

A sombre mood has clouded the elation from earlier in the week, when the boys were found dishevelled and hungry but alive on a ledge several kilometres (miles) inside the cave. 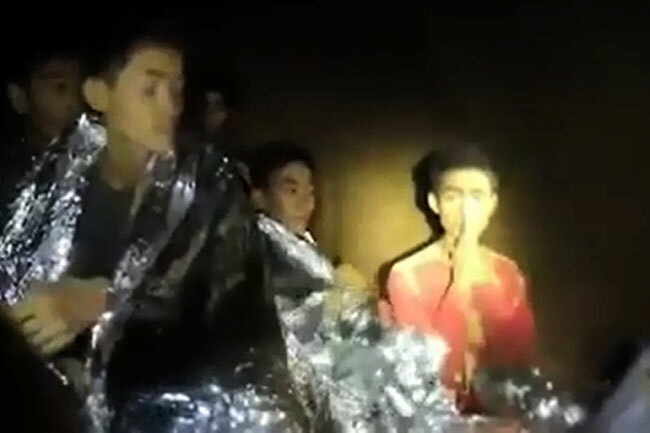 Many of the boys -- aged between 11 to 16 -- are unable to swim and none has scuba experience, further imperilling any attempt to dive out of the cave.

Those risks were made all the more immediate by the death of the diver, identified as Saman Kunont, who passed out and perished while returning from the chamber where the boys are trapped.

He was part of a team trying to establish an air line to the chamber where the children are awaiting rescue.

The Seal commander said oxygen levels in their shelter had dropped, but said a doctor was with the team monitoring their health.

Chiang Rai deputy governor Passakorn Boonyaluck delivered the "sad news" of the diver's death to reporters massed at the entrance to the cave complex.

"We lost one man, but we still have faith to carry out our work." 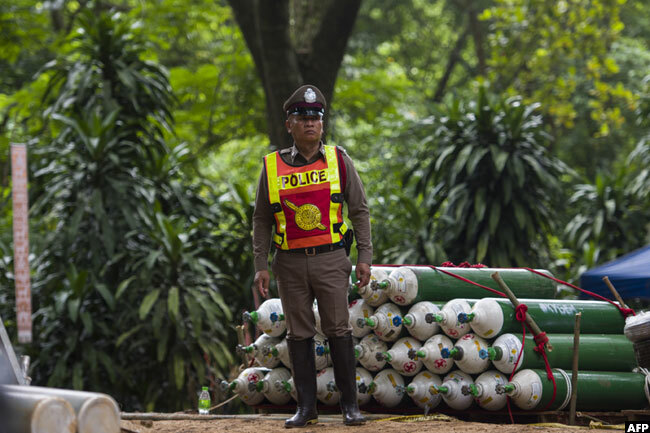 Asked how the boys could make it out safely if an experienced diver could not, Apakorn said they would take more precautions with the children.

Even for expert divers the journey is an exhausting 11-hour round trip.

"It's very risky (diving out). Think about it, a Navy Seal just passed away last night, so how about a 12-year-old kid," said Rafael Aroush, an Israeli volunteer helping the rescue bid.

Officials vowed to investigate the death, and have sent the body to a local hospital for an autopsy.

The accident marks the first major setback for the gargantuan effort, which started almost two weeks ago after the "Wild Boars" team went into the cave in northern Thailand following football practice.

Their ordeal has gripped Thailand, with the nation holding its breath for their safe escape.

Messages of support for the "Wild Boars" have come in from across the world, including from football stars in Russia for the World Cup.

The unprecedented rescue mission has been dogged by the threat of rains, which complicate pumping water out of the cave system.

The trapped team has been receiving basic training in breathing through diving equipment in case the order to evacuate is given.

But authorities are reluctant to allow them to dive out of the cave, given the extreme risks.

Other options under consideration are waiting out the monsoon -- which could take months -- or climbing out through a crack in the rock face, if one can be found.

Luweero to get sh1b pineapple factory