Sweden edge past Switzerland to book quart...
Next Story

England knock out Colombia to reach the last-eight

England knock out Colombia to reach the last-eight

OK, I will leave it here. 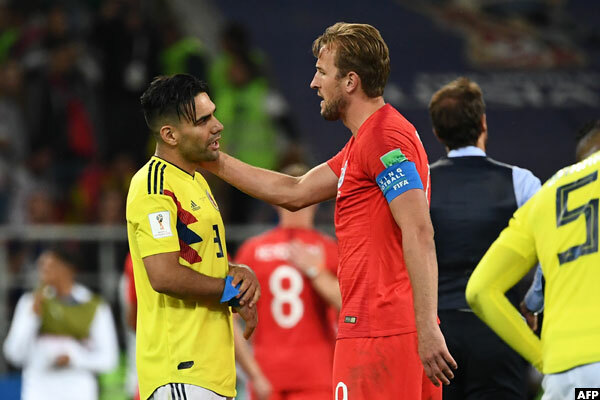 The 2018 FIFA World Cup has been thinned down to eight teams.

Europe dominates the quarter-final menu. Each fixture has its own delicious toppings. Take your pick.

Personally, Brazil v Belgium will be the juiciest.

England will next face Sweden (who knocked out Switzerland in the earlier game) in the quarter-finals.

That's quite a difficult question to pose to a Colombian (fan).

Tonight's was the third knockout match to be decided on a penalty shootout at this tournament.

Colombia were on the losing end at end of the dreaded spotkicks, leaving their passionate supporters understandably inconsolable.

Some decided to wail their disappointment out . . . 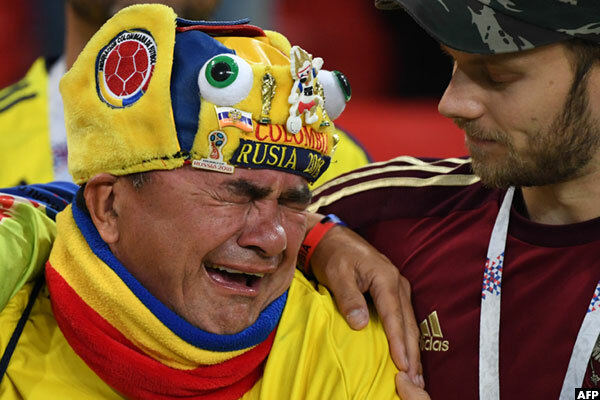 Others were left forlorn and wondering what could have been . . . 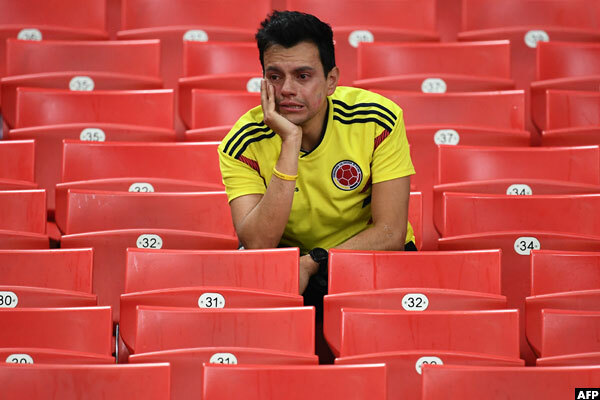 Others stared right through the emptiness before them, perhaps wondering how ruthless this sport can be . . . 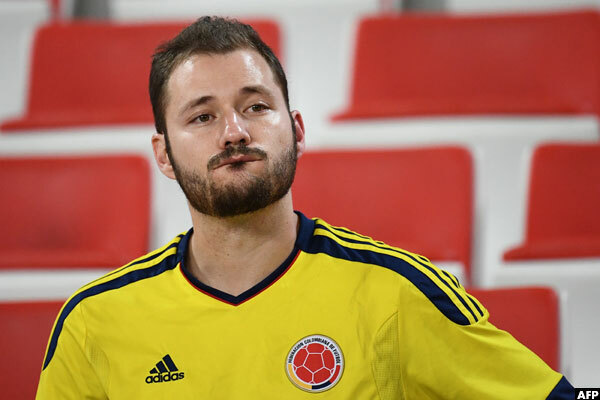 For some, disappointment is hard to stare at - and the feeling that the earth should open up and shallow them up becomes ever real . . . 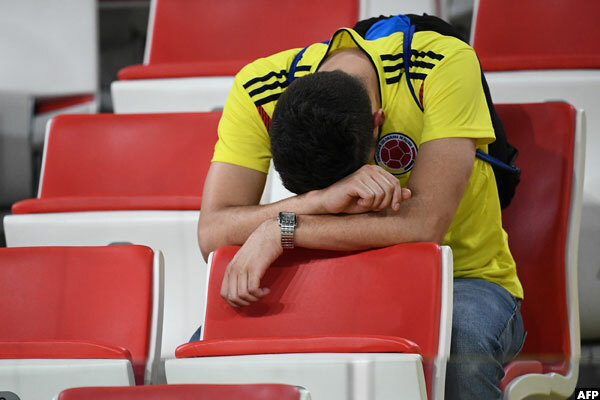 No one change fate. It was meant to happen. We shall have penalties.

It has to end here tonight.

This is the first time in World Cup history that three matches are decided on a penalty shootout at the knockout stage.

One more minute to the dreaded penalty shootout.

Who can salvage something here?

Who change the course here?

The inevitability of penalties grows by the  second.

Prayers amongst the crowd.

That was reckless by Juan Cuadrado on Danny Rose.

Desperation at its highest here.

How close was that!

Suddenly, Jordan Henderson breaches the Colombian defence, he threads the ball into the path of Danny Rose, who has an acute angle to score from.

He won't find the net, as he sees the ball roll agonisingly past the goalmouth and out of play.

That could have well been the winner. 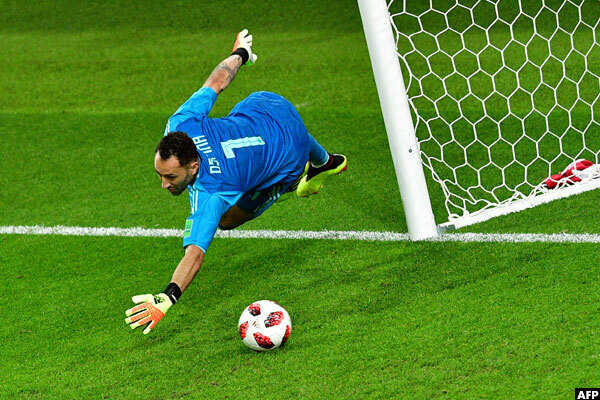 Kyle Walker limps after a challenge as the direct effects of 109 minutes of football show. He appears to have got a cramp in the leg, but the England defender must carry on.

Jamie Vardy starts off England's business with a hot shot on target. David Ospina has the ball safe in his gloves, but still, Vardy was already offside.

That's the end of the first-half of extra time after one minute of added time only does well to tire those 22 pairs of legs on the pitch even the more. 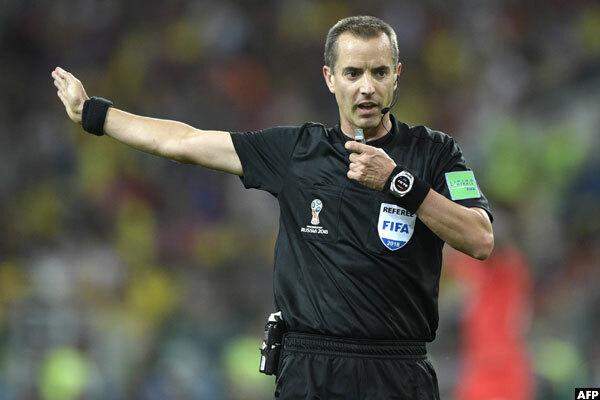 An exhausted Ashley Young is off for England.

The overbearing weight of exhaustion is taking its toll - and it is showing more evidently on the English side of this contest.

More evidence is Colombia's huffing and puffing. They are playing on reserves.

Falcao and co are looking for the winner.

The penalty shootout cloud is looming large over Spartak Stadium.

The atmosphere is vociferous.

That hurt. We are back for extra time, and not very long, Ashley Young and Santiago Arias are involved in a clash of legs.

England get the freekick though, as the crowd raises the volume.

ALL TO PLAY FOR HERE

Both teams' medical teams are busy. They have to find every means possible to inspire 30 more minutes of playing time from those exhausted legs.

The referee has let the game drag on a little over the five minutes of added time.

He finally calls time to a dramatic finale.

We shall have 30 minutes of extra-time, thanks to Yerry Mina's brilliance.

A counter attack. Colombia have the ball.

NO! Corner. Keeper David Ospina runs to the England box to get involved.

This could get interesting, ladies and gentlemen!

England have five minutes to hold on - and keep off any sort of Colombia pressure.

Colombia have five minutes to find the equaliser.

Can they? Will they?

England take off Raheem Sterling. Jamie Vardy is on.

England beat Colombia 2-0 in their only previous World Cup encounter thanks to goals from Darren Anderton and David Beckham in the group stage of the 1998 tournament.

They are on course to bettering that streak here at the Spartak Stadium.

Perhaps we could have been saying we are back on course for extra time. But Colombian Juan Cuadrado fires into the crowd once played through during a blistering counter attack.

England introduce Eric Dier in place of Dele Alli, who has not been in good shape for some time in this half now.

Carlos Sanchez is off and on comes Mateus Uribe.

Time is running out for Colombia though.

It was a BIG goal.

And England's supporters erupted in the wildest of ways. 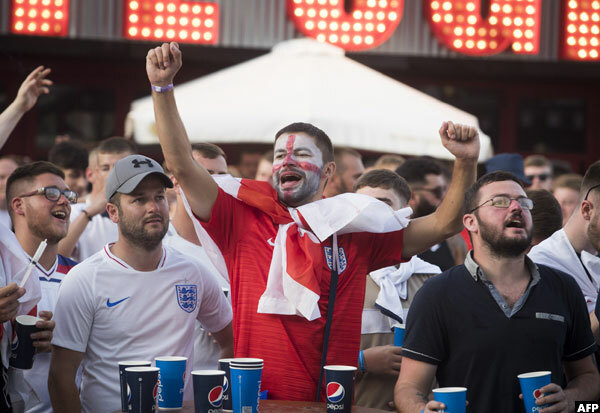 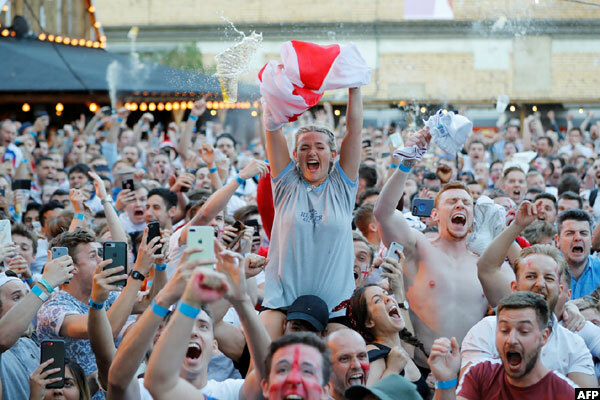 68min     Time running out for Colombia

Against Senegal in the group stage, Colombia did not register a single touch inside the opposition penalty area until the 57th minute.

Well, here against England, they did have a few touches inside the area in the opening half, but they will need more of them if they are to find the leveler.

Twenty-two minutes left on the clock to execute that.

Ashley Young, who has free spirit on the left flank, is down after being brought down mid-attack.

The Manchester United winger stays down for some time, needing medical attention.

A quick test confirms that he is still good to carry on. Sighs of relief from the English crowd.

Carlos Bacca, who has not been on for long, is booked. That was quick.

This game is getting more and more difficult to manage for the American referee. 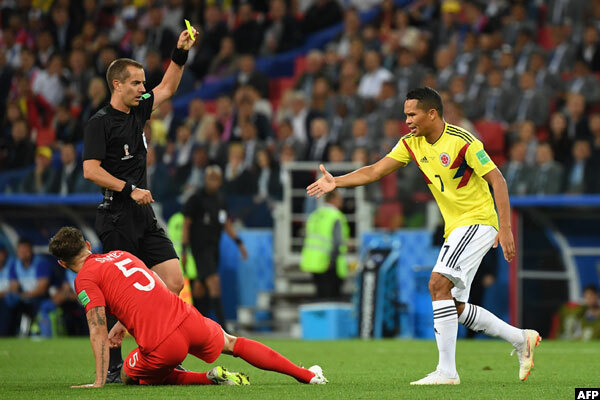 Colombia captain Radamel Falcao will have to cool down here.

He is the offender here and goes into the referee's book to become the fourth Colombian player to be yellowcarded tonight.

Colombia, now a goal down, make the first change of the night. Carlos Bacca is on for Jefferson Lerma.

Here we go again. Carlos Sanchez pulls down Harry Kane during the resulting corner inside the box.

Penalty for England and yellow card for Sanchez, who pleads innocent. 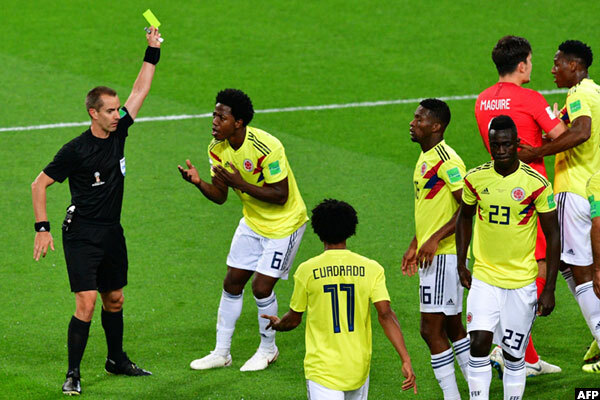 England get another freekick after Santiago Arias knocks Harry Kane during a mid-air challenge.

Arias is booked, before Ashley Young delivers the kick, which is headed out for a corner by Davinson Sanchez.

He loves to score. He has scored already at this World Cup.

But can Harry Kane bang in those goals? 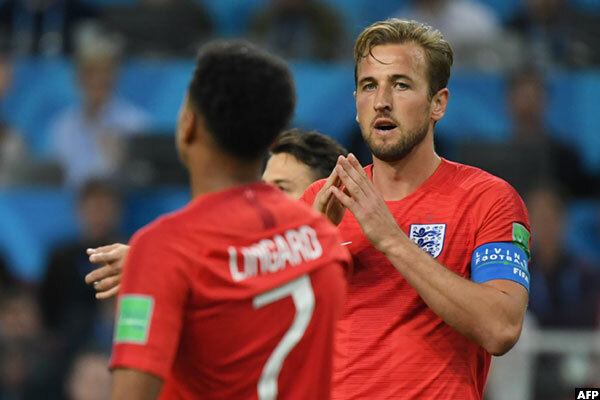 We return, and this time, England get us underway.

HALF TIME - No goals yet

We can't say there is anything that separates these two sides. Not even 45 minutes of action.

We haven't had any goals yet and you can sense the unease and anxiety around the Spartak Stadium.

Referee Mark Geiger will soon call this one out. But first, three minutes of additional time before the break. 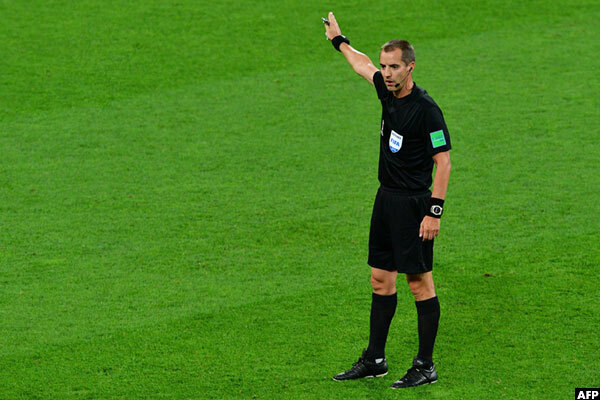 Colombia make a move. Falcao is in the mix of things with Quintero. They look menancing.

But the Colombian captain blasts his shot right in the delicate region of Dele Alli. Any man knows just how painful that can be. 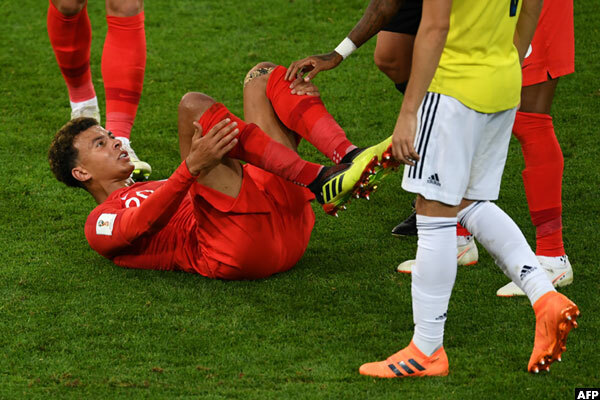 But before that freekick can be taken, a melee ensues at the wall. It's rough but it won't be tough for the referee. There is lots of shoving and pushing from both sides.

Wilmar Barrios is shown the first yellow of the night, before eventually Kieran Trippier whipping the freekick off-target.

Jefferson Lerma fells Harry Kane right on the edge of the box.

Colombia have not been beaten in eight games against European sides since head coach Jose Pekerman took charge six years ago.

They have won six and drawn two. Clean.

It remains a game begging for at least a goal, but we have seen some personal clashes here and there.

The latest confrontation is between Radamel Falcao and Kieran Trippier.

These two are testing referee Geiger, for sure. The yellow card aint far deep in his pocket, they ought to know. 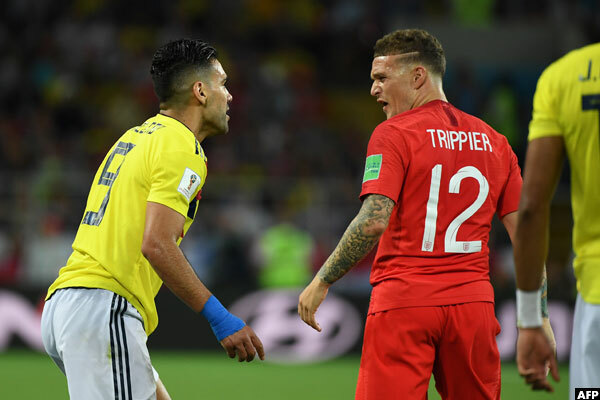 As we approach the half-hour mark, it may be useful for you to know that Los Cafeteros - who are Colombia, by the way - have scored in each of their last eight World Cup games.

The last team to stop them scoring in the tournament was England in France 1998.

At this point of the game, England have had four corners.

They haven't put them to any good use though. In fact, they are as good on the scoreline as Colombia, who haven't had any corner yet.

Tonight, one man is determined to join the English greats.

If Harry Kane scores against Colombia, he will become the first player to score in six consecutive appearances for England since Tommy Lawton back in 1939. 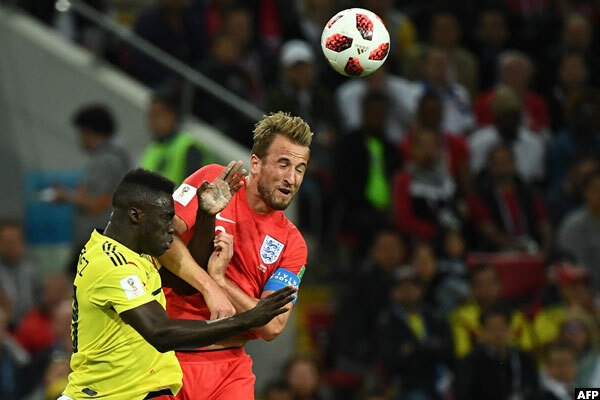 It has turned into a two-way traffic, following England's initial force.

Radamel Falcao (captain) and Quintero are giving the Colombian fans something to cheer about as they make a rare surge towards the English back.

The threat is swiftly dealt with though.

England have won two of their last eight World Cup knock-out games. If you are interested, you may want to know that their last knock-out victory in the World Cup was when they beat Ecuador 1-0 in the round of 16 in 2006.

He heads the ball onto the roof of the net from a well-measured Kieran Trippier cross from the right.

This is the third time Colombia have made the knock-out stage of the World Cup. The only previous occasion they've made it past the round of 16 was in the Brazil edition (in 2014).

Meanwhile, Quintero and Falcao are working out something useful here for Colombia, but the English defence won't let them linger any much longer in their final third.

England have another corner. Ashley Young is ready to dice it in. He does, but the whistle goes.

John Stones is guilty of tagging his minder, Jefferson Lerma inside a very crowded Colombian boxy.

England have remained unbeaten against Colombia in five last duels. Michael Owen scored three times in the most recent match, which England won 3-2 in New Jersey in 2005. 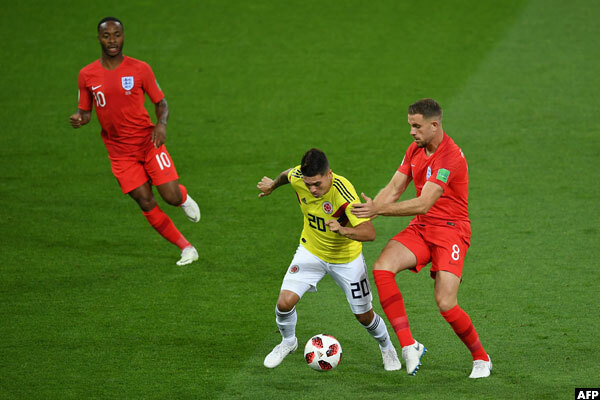 Yerry Mina has some early work to do at the Colombian back. He has to stop Raheem Sterling in his tracks, to gift England an early freekick on the edge.

It is a good spot to test David Ospina.

Ashley Young whips in the ball but Ospina punches it out, but in the path of more English attack. The result won't do any harm.

The crowd is restless in these earlier moments of the game. 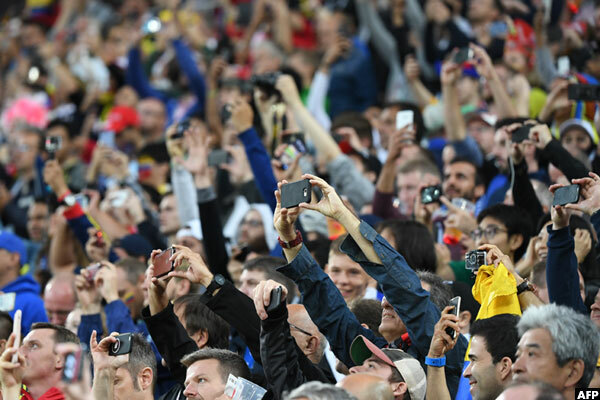 And there we go. Colombia tap the ball into motion.

American referee Mark Geiger is plunged into the heart of the action here.

Colombia have never beaten England. Is tonight their tonight of changing the course of history?

They have the flair, yes. But England have some admirable youthful exuberance about them.

Colombia are starting with a 4-3-2-1 formation.

You may decide to see it as a balancing act, but whichever tonight's seesaw throws you, we definitely have the promise of a great match ahead.

There is all to play for here.

Hello and welcome to Spartak Stadium in Moscow, where tonight's much-anticipated action will unfold across 90 (or who knows, 120) minutes of football.

You will miss out if you fail to refresh this page for updates. 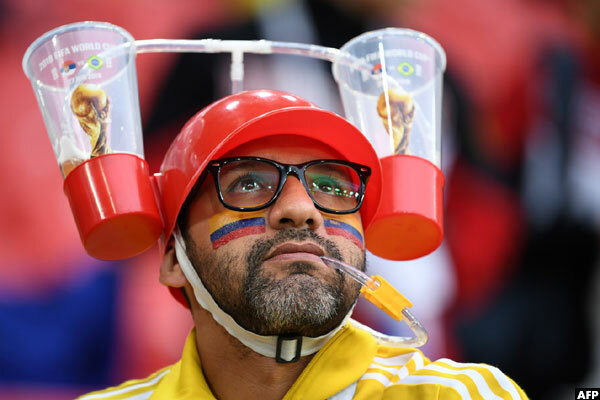 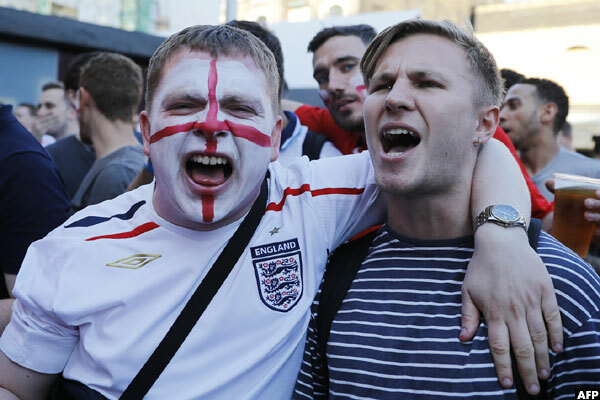 France, Uruguay, Russia, Croatia, Brazil, Belgium and Sweden are through to the 2018 FIFA World Cup quarter-finals. One more place is up for grabs.

Who will snatch it?

A huge clash to decide that is coming up shortly.

Zacarias Moussaoui: Lying for the jihad