Slow start for Vipers at the CECAFA Kagame...
Next Story

How France knocked Argentina out of 2018 World Cup

And what a contrast of emotions!

He may be world-class, but even Lionel Messi is human. 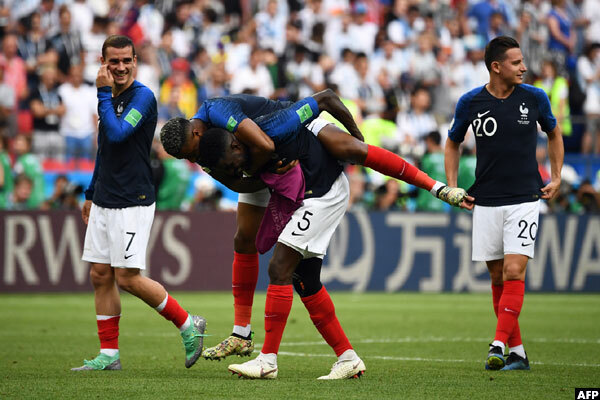 A final push for Argentina into the French box.

That should be it.

And that goal has sparked the flares here.

Nicolas Otamendi angrily blasts the ball onto a felled Paul Pogba around the midfield.

His reaction causes a clash between players from the two sides, prompting the intervention of the officials.

Quick yellows are flashed. One for Otamendi and the other for Olivier Giroud, who got himself immersed into this chaotic plot.

We shall have four minutes more to play.

It has been a dramatic episode in Kazan.

A teenager by the name of Kylian Mbappe has punished Argentina with two goals in the space of five minutes. And that teenage sensation, Kylian Mbappe, will now rest.

It is desperate times for Argentina now - understandably so.

If they get a third goal now, perhaps it would revive their hopes of taking this clash further.

Lionel Messi is allowed to slip through the box and try towards goal, but the French defenders recover quick to extinguish this threat of a man. The French camp can afford to let Antoine Griezmann take a rest. He scored from the spot to open what would metamorphose into a goal galore in this evening's epic clash.

80min     ARGENTINA MUST SCORE TWO TO STAY IN IT

As it stands, France are going through to the quarterfinals, while Argentina will be out.

Jorge Sampaoli's men have 10 minutes to turn their fate on its head. 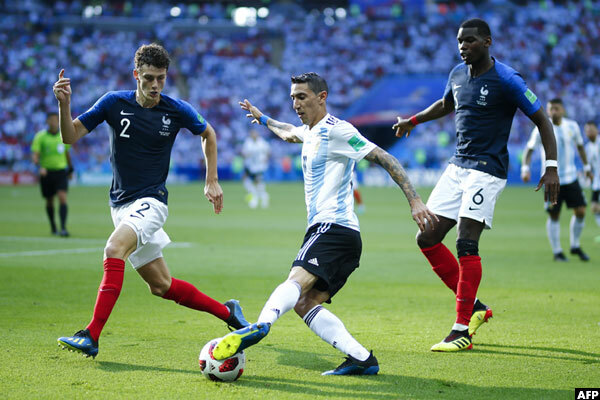 These two sides are facing each other for the 12th time. Argentina have enjoyed six wins versus two.

Coming into this evening's game, the South Americans had also kept a clean sheet in eight of their previous 11 encounters.

They have shipped four so far against a resurgent French side here in Kazan.

Kylian Mbappe is now the only second teenage player to score at a World Cup. The only other one was the great Pele of Brazil in 1958.

Meanwhile, Argentina, wearing their traditional light blue and white stripes, are fighting to come back into this game.

As it stands, they will be knocked out of the World Cup.

Their starman, Messi, hasn't been allowed much time with the ball.

Argentina still have time to turn things around.

Can Lionel Messi yet again inspire his side as the South Americans suddenly find themselves desperate to claw but into a game that has turned haywire (from their point of view) in a matter of minutes?

Argentina need a response - and real quick at that.

Coach Jorge Sampaoli slaps on a man who was openly critical of him after that 3-0 defeat to Croatia in the group stage - Sergio kun Aguero.

We know the Manchester City striker for banging them in - goals, I mean.

Know why this game is such a  beauty to watch?

It is the first encounter between two previous world champions at this World Cup in Russia.

France has won the tournament once, while Argentina have done it twice.

Argentina's last four knockout games in the tournament have produced only three goals (two goals for, one against).

Today's game has produced three so far (two goals for, one against).

That was Mercado's fourth goal for his country. What a time and occasion to get it!

Argentina have started the bright side here.

In fact, Di Maria is tagged while approaching the box and it is an early second half freekick for Argentina.

Kylian Mbappe has put on his usual lighting-fast boots and his direct approach has caused problems at the Argentina back.

His pace gifted France with a penalty that Antoine Griezmann converted beautifully.

But with Argentina bossing possession, and their talisman Lionel Messi awakening from his apparent slumber, it was only a matter of time that the South Americans would find the leveler. And how deliciously Angel di Maria turned that in!

Second half beckons, and we should be looking forward to some great piece of football.

HALF TIME - ALL SQUARE

And the referee calls time on the first half.

It has been an epic clash so far - as it had promised.

This opening half has flown by, and we shall have two minutes of added time.

Paul Pogba will need to clam his temper as he gets confrontational with goal scorer Di Maria during a challenge.

The referee is quick to play peacemaker and does pacify the charging storm.

That was Angel di Maria's second goal at a World Cup finals.

Argentina have won six of their seven World Cup last-16 games, and with the proceedings here in Kazan, the South Americans look determined not to slip.

After a subdued opening period, Lionel Messi has started to wake up from his deceptive slumber.

The striker is back to business as usual with his dazzling dribbling, but the French eyes are wide open. 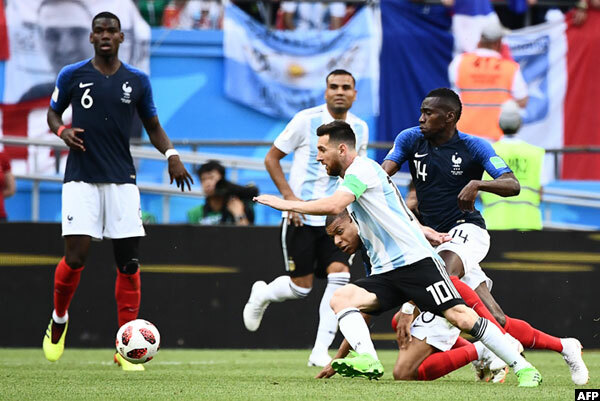 Two opposing players are down, writhing in pain. Olivier Giroud and Nicolas Otamendi have just clashed inside the Argentina box and will need some attention.

It is a quick game that has had Argentina boss possession so far - only they are trailing.

This 19-year-old is vibrant and full of industry in the French attacking force.

His side have never lost a World Cup last-16 tie ever. As it stands, they are sitting pretty as we hit the half-hour mark of this game. The last time they did was in 1978 - against their opponents today (Argentina).

Meanwhile, Antoine Griezmann nearly piles more misery on Argentina but his cut inside the Argentina box is dealt with with timely precision.

These two sides are meeting for the third time at a World Cup final. Argentina won the previous two - in 1930 and 48 years later in 1978.

It is four decades since their last World Cup meet and France are leading.

Captain Lionel Messi has been anonymous in these opening minutes.

The resulting freekick on the edge of the D will be taken by Manchester United midfielder Paul Pogba.

But he lifts his kick way over the bar. The French crowd are clearly disappointed. What is going on here?

Kylian Mbappe is proving to be a menancing presence for the Argentine back.

The ubiquitous teenage sensation again bursts forward but is brought down by Nicolas Tagliafico.

It is a freekick for France just a few inches outside the box. And a yellowcard for offender Tagliafico.

Messi's side are shipping cards here. Not looking good so far.

By the way, you may need to know that France have never lost a match when Antoine Griezmaan has scored.

Kylian Mbappe is fed into the Argentina box. But Marcos Rojo is keen to stop him. The Manchester United defender does, but it is too heavy a tag. His 19-year-old French tormentor goes crashing down.

It is a penalty. And Rojo is yellow-carded.

That should have been goal number one!

France get a freekick near the edge of their opponents' edge. Antoine Griezmann, standing over the ball, will fancy his chances here.

He goes for goal, but his hit crashes off the bar, with Argentina goalkeeper Franco Armani clearly left in the cold.

This French side fielded their youngest team in a World Cup game since 1930 in their opening match against Australia.

And now with Nigeria out, they have the youngest squad at this tournament.

They are in danger though, as an Argentina attack sees Angel di Maria burst down the left, but soon, his surge is brought to a screeching end, thanks to good defending.

It is a scruffy start to the game as both sides try to find their balance. 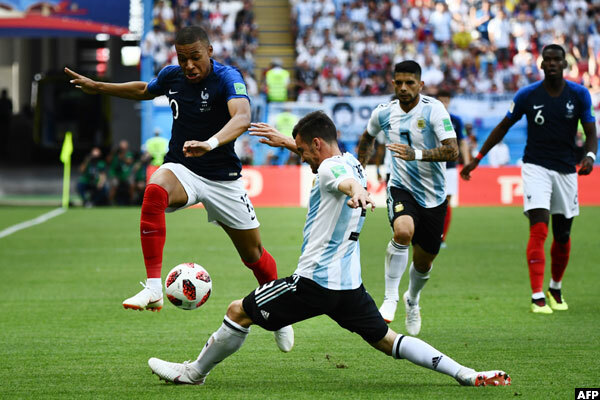 Argentina get the first freekick of the game though. Ever Banega, who set up captain Lionel Messi for his opening game against Nigeria in the group stage, whips the ball in. It is, however, cleared untidily by France.

It is game on here in Kazan Arena.

The crowd has turned the initial volume up. These two sides are meeting at the World Cup for the first time in 40 years.

Argentina, on the other hand, are going with a 4-3-3 formation.

Good evening ladies and gentlemen. We are having an epic clash coming right up.

This is the first game of the 2018 World Cup knockout stage and, if you asked me, I would say it it is going to be a delicious encounter.

The teams are anxiously waiting inside the dugout for the preliminaries. 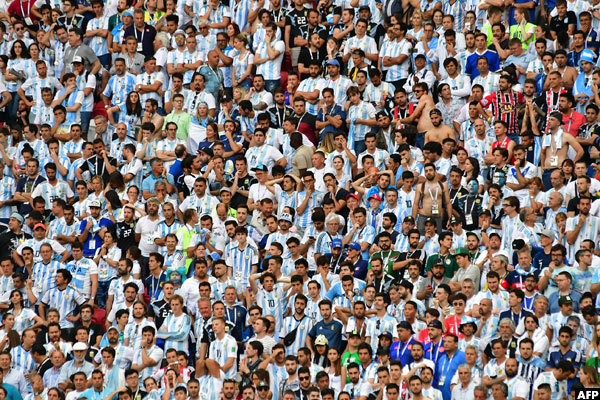