Ugandan scientist honored for Bilharzia re...
Next Story

According to Uganda Dairy Development Authority, the per capita consumption of milk in Uganda has increased from 25 litres in 1986 to 62 litres in 2017.

According to Uganda Dairy Development Authority, the per capita consumption of milk in Uganda has increased from 25 litres in 1986 to 62 litres in 2017.

PIC: Only 33% of the marketed milk is processed and 67% is marketed raw.(File photo)
FARMING
KAMPALA - From 2.08 billion litres of milk produced in 2015, milk production in Uganda increased to 2.5 billion litres in 2017/2018.
This represents an annual milk production growth rate of six percent, according to Uganda Dairy Development Authority.
June marks the Dairy Month. This year's celebrations are under the theme "Gender Inclusion for Wealth and Health in Milk Production and Consumption."
The theme is acknowledging women's significant contribution to the dairy sub sector in particular and agricultural in general plus to food security and the country's GDP.
This is in addition to promoting efforts to attain Sustainable Development Goal five aimed to achieve gender equality and empower all women and girls.
But, Dr. Jolly Kabirizi a dairy farmer and livestock nutritionist says for women and dairy farmers in general to boost milk production even further in Uganda, animal feeding and disease control management must improve.
"The problem we have is that the inputs are costly, quality drugs are diluted yet sold at high costs and maize brand is mixed with saw dust which affects animal performance and output.
But, Uganda has potential to produce more milk if we improve feeding management," she says.
Need for more milk
According to Uganda Dairy Development Authority, the per capita consumption of milk in Uganda has increased from 25 litres in 1986 to 62 litres in 2017.
The authority stated that 80% of the total national milk produced is marketed and 20% consumed by the farming households.
Only 33% of the marketed milk is processed and 67% is marketed raw.
Dr. Kabirizi says every Ugandan should be able to drink a minimum of a quarter a liter of milk per day.
But, unfortunately many can't afford especially the children and this leads to cases of malnutrition among the young children.
Milk is a key source of essential nutrients that include proteins, calcium, phosphorous, carbohydrates, fats, vitamins A, B6 and B12.
They are easily digested by children and adults for proper development of the brain, body, strong bones, energy and good eye sight.
However the per capita annual consumption of milk in Uganda is still way below the 200 litres as recommended by the World Health Organisation. 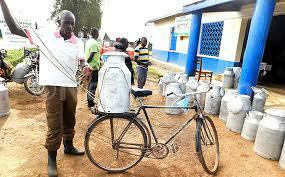 Lessons
In Africa the highest milk producing countries are Ethiopia, Kenya, South Africa, and Sudan. Of these, Ethiopia has the most cows while South Africa has the greatest milk production per cow.
But, only Ethiopia and Kenya are self-sufficient, meaning dairy production meets or exceeds dairy consumption.
Milk production has been through modern and smallholder dairy industry, the two different dairy models that exist in Africa, according to a University of Kentucky college of agriculture, food and environment publication.
South Africa for example, dwells on modern dairy industry and farmers own over 500 cows and use a total mixed ration that contains all feeds and nutrients required by the cow to effectively, efficiently and profitably feed dairy cows.
In Kenya, it is the smallholder dairy industry, where 80% of dairies have fewer than five cows.
The cows are fed on grass and crop residues, with most feeds being cut and brought to the animals rather than using a grazing system to feed cows for milk production.
According to Dr. Kabirizi Uganda will produce even more milk, if feeding is improved and disease control is also well managed.

Violence soars in Gaza as world pleads for truce