School children are the most affected because of their increased water contact through playing, bathing, swimming and fishing.

School children are the most affected because of their increased water contact through playing, bathing, swimming and fishing.

PIC: Prof. Virginio Ongom (right) with collegues. (File photo)
AWARDS
KAMPALA - A Ugandan scientist who made pioneering discoveries about Bilharzia (schistomiasis) got posthumous honours for his work on Thursday, June 28, 2018.
Prof. Virginio Lachara Ongom, who was the first African director of the Institute of Public Health at Makerere University between 1975 and 1980, was honoured for his extensive research into the disease.
Bilharzia, a disease caused by parasitic flatworms called schistosomes.
Transmission occurs when people suffering from Bilharzia contaminate freshwater sources with their excreta containing parasite eggs.
More than one in three Ugandans suffer from Bilharzia, according to a survey conducted by Makerere University School of Public Health in 2017.
The survey, whose findings were released early this month shows that about 11 million people in Uganda are living with the disease.
Prof Ongom, who passed away 38 years ago, left a large profile of works about the disease that was later published in several globally respected medical journals.
The School of Public Health, where most of the research was carried out, has organised a Memorial Lecture in his honour on Thursday.
The public lecture will examine efforts to tame the disease along with other neglected tropical diseases since 1980, as well as steps to eliminate them to achieve health goals under Vision 2040.
This will be under the theme "Bilharzia (schistosomiasis) and other Neglected Tropical Diseases in Uganda since 1980: Towards elimination in realisation of Uganda Vision 2040, what is the way forward.
Prof. Ongom's research was pioneer work on Bihharzia in Uganda, which informed policy formulation and initial response to Bilharzia for this country.
According to the Dean School of Public Health Makerere University School Professor Rhoda Wanyenze, Ongom's  research generated much interest in Bilhazia in Uganda and interest in having it eliminated. 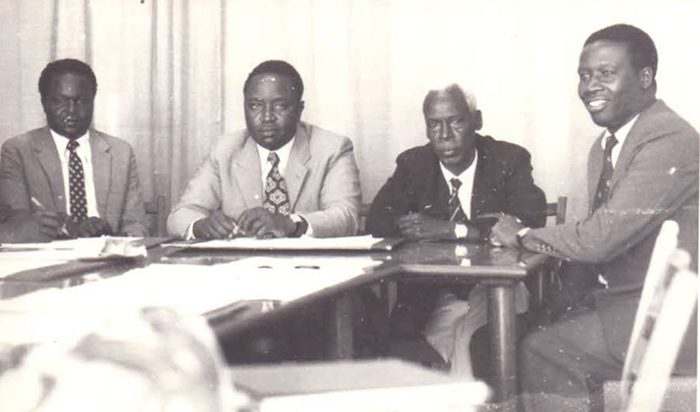 Prof. Ongom with other UCB board members. (File photo) 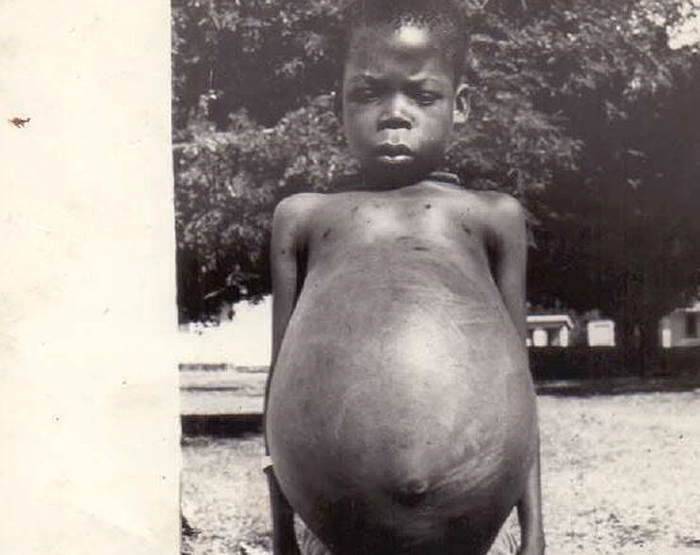 A photo of a bilharzia patient. In Panyagoro village where Ongom hailed from, the treatment was being done under his neem tree. (File photo)

Impact of Ongom's work, his legacy and future plans
Prof. Wanyenze says back then Uganda didn't have many people conduct research on Bilharzia.
"Prof. Ongom's work generated much interest in the disease in Uganda and interest in having it eliminated," she says.
In 2003 Uganda become the first African countries to launch a national-scale bilharzia and intestinal worm control programme in Pakwach in Jonam County the area where he conducted his initial research.
But bilharzia is still seen as the second most devastating parasitic disease in the world after malaria.
By the year 2000, the disease was claiming about 200,000 people annually, according to World Health Organisation.
A recent nationwide study shows 29% prevalence of bilharzia which means one person in every three has the disease.
Dr. Simon Kibira, a lecturer at the Makerere University's department of community health and behavioral sciences, says open defecation and urination are major risk factors in the spread of Bilharzia.
The latest survey indicates bilharzia is more common among children between the age of two and four years (41.9%) and pregnant women (20%).
Its prevalence is highest in eastern Uganda (34.7%), followed by Northern Uganda (30.9%), Central (29.5%) and Western Uganda (23.6%).
Prof. Wanyenze says Uganda is a country with one of the highest prevalence rates of Bilhazia in the world.
"We are doing badly especially in some districts around Lake Kyoga," she says.
The 2015 study by Makerere University School of Public Health around eight districts of Lake Kyoga put the prevalence at 48.5%.
This means one in every two people has bilhazia.  "This is not acceptable. We have a very high national prevalence rate of bilharzia.
Actually people even don't know they have the disease. They have children looking different with swollen tummies but will not know it is bilharzia because they are not diagnosed," she says.
Wanyenze says government needs to act now on some of the research findings on Bilhazia so that we can eliminate bilharzia.
Bilharzia is a disease targeted by World Health Organisation for elimination in many countries including Uganda by 2020.

'Lokodo proposal on pastors to be discussed'