Uruguay beat hosts Russia to win Group A
Next Story

Spain draw with Morocco to advance to the knockout stage

Spain draw with Morocco to advance to the knockout stage

GROUP B: SPAIN AND PORTUGAL PROGRESS

These were fine margins but Spain and Portugal are through to the knockout stage.

Iran and Morocco out of the competition.

Meanwhile, in a clash of Group A v Group B, Portugal will play Uruguay while Spain will face off with Russia at the next stage. 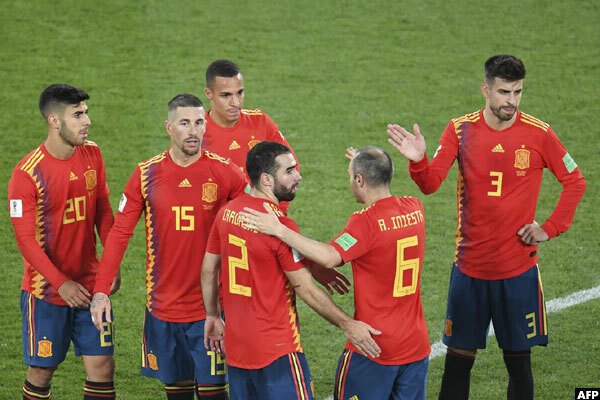 As it stands, Spain are through to the last 16.

The other end, Iran have levelled against Portugal in a nervy finale.

Iago Aspas has the ball in.

Wait, is it offside?

We shall have the video-assistant refereeing involved.

The Spaniards will advance, but of course this cannot be the way they would have wished to. 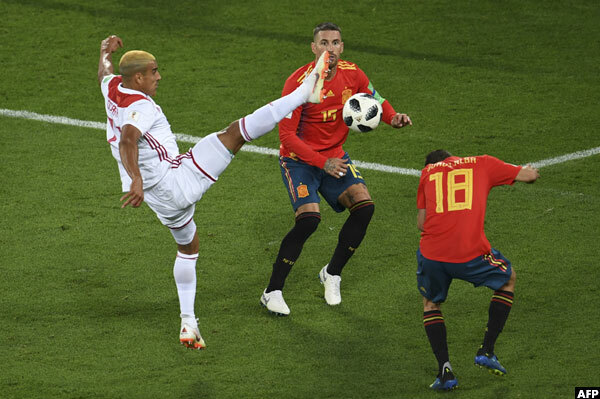 Clearly, the Atlas Lions are not going without a fight.

And what a way it will be for the north Africans to bow out of the competition!

We are coming into the final 15 minutes of this game.

Morocco are still hanging on (or even perhaps going for the whole three points) but if they lose against Spain tonight, it will be just the second time that they have lost all of their group games.

On the sidelines, coach Herve Renard is willing is men on. 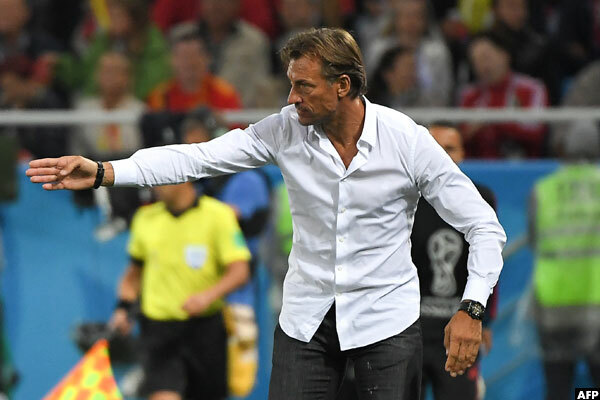 As Spain extinguish the threat that Morocco had transformed into this second half, let us look at what the next stage promises to be.

Well, that cannot be confirmed - yet.

Morocco make reforms. Faycal Fajr comes on in the place of Younes Belhanda.

This is the first change of the game.

Meanwhile, in the other Group B match, Cristiano Ronaldo failed to extend Portugal's slender lead over Iran after missing a penalty a little while ago.

The Real Madrid forward's side are still top of the group though as it stands.

It is clear that Morocco  have returned with a more aggressive approach. Spain, despite their cute and deft passing game, are being given a good run for their money here. Great intervention by Romain Saïss as Daniel Carvajal attempts to dip in a cross from the right corner.

Morocco have now been eliminated at the group stage in four of their five World Cup campaigns. The only time they progressesd was in 1986.

Great save by Spain's Number One David de Gea.

The Manchester United goalie must intervene herE. He does, and with so much emphasis and determination to block the ball out of danger as Morocco captain Moubarak Boussoufa flies in a bid to connect. 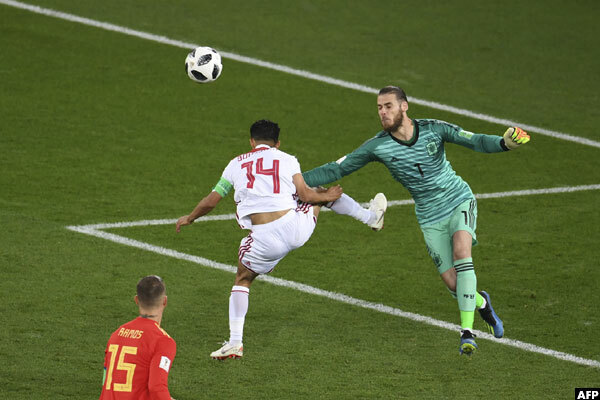 
Morocco get us underway here.

Spain have finished top of their group in three of the last four World Cups. Only in Brazil (2014) did they face an early exit.

The Spaniards have also won their final group game in each of the last eight World Cup tournaments, a run stretching back to 1986.

Here in Kaliningrad, they have 45 minutes to prove they still sit among the best.


An entertaining opening half that you wished didn't end has to do exactly that - end.

He doesn't miss those.

Diego Costa, so often a prolific goal scorer, fails to connect here after yet another brilliant piece of work by Iniesta on the left.

The Spaniard, after making a spirited run forward, cuts a pass across Morocco's goalmouth but Costa misses under pressure.

Iniesta holds his head in disbelief. What an entertainer!

Portugal are back at the summit of Group H, after Ricardo Quaresma's 45th-minute goal.

As we approach half time, Spain are top of the group, with the other group game between Portugal and Iran still tied on 0-0.

As it stands, Spain will be through to the last 16.

Iniesta is such a danger on the left flank - his trickery, sharpness and invention are proving to be a thorn in the side for Morocco.

By the way, Spain have won three of their four World Cup matches against African opponents - losing one and netting 11 goals.

They have one in already here. Can they find another? 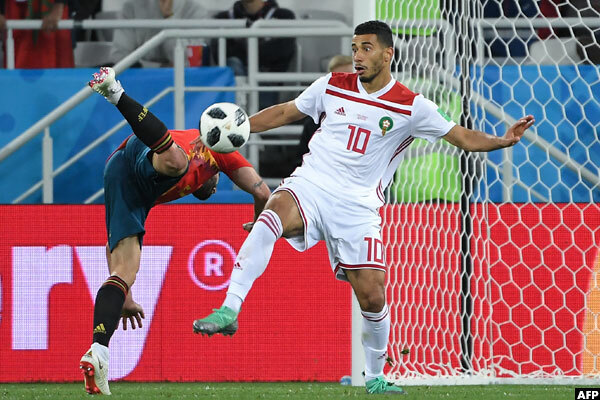 Morocco's goalkeeper Munir Mohamedi, wearing sky blue tonight, gestures to his teammates to calm down once he easily collects a ball whipped in from a corner kick.

His side are nearly went ahead again a little ago, and they could fancy their chances now. The north Africans are saying something here: We are not going down without a fight.

It iis a bit of a frosty affair here. Manuel da Costa is booked for clawing on Isco. But his captain, Moubarak Boussoufa is furious over the referee's decision to blow the whistle. That fury, however, lands him too in the book.

That should have been two for Morocco and two for Khalid Boutaïb, as the forward, once played through - outrunning Ramos - has de Gea to beat again.

But this time, the Spanish Number 1 puffs himself to block. 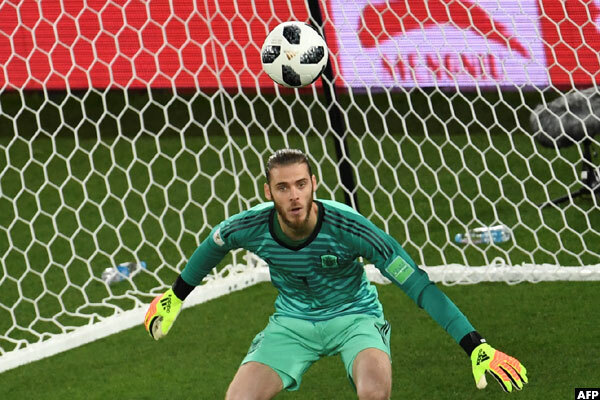 They have just managed to claw back into this game, and the Red Fury will feel they have the edge to take this one.

Iniesta, Jordi Alba and Isco are keeping the Moroccan back busy. They nearly fashion another breathrough, but timely intervention clears the danger.

The Spain are unbeaten in 22 matches in all competitions. They have won 15 and drawn seven -  scoring in each game.

Are they about to see that record brought to a heartbreaking end?

The situation is going out of hand real quick here. It is becoming a very physical affair, with individuals going at each other.

Nordin N Amrabat is in the negative spotlight here after lunging at Isco and Ramos.

Offender and Ramos, also known for his outbursts on the pitch, breathe in each other's faces before being split for play to carry on. Thhe Red Fury, as they want to call themselves, have the privilege of taking the first corner of the game.

David Silva whips it in from the right corner, but Gerard Pique, who has a reputation in set pieces, is beaten to it.

Thhe previous meetings between these sides were in a two-legged qualification play-off for the 1962 World Cup. Spain won the two games.

But tonight, despite playing for nothing, Morocco are showing they are no pushovers.


The task for Spain is clear: Avoid defeat and you are through.

Referee Ravshan Irmatov of Uzbekistan is the man in charge, and he allows the Spaniards to get the ball rolling with his whistle.

We are done with the preliminaries and so we should be getting done to some action. 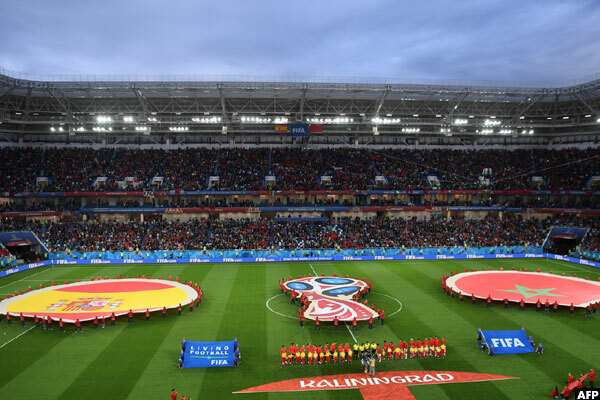 Morocco have gone with the same formation. This should be interesting. 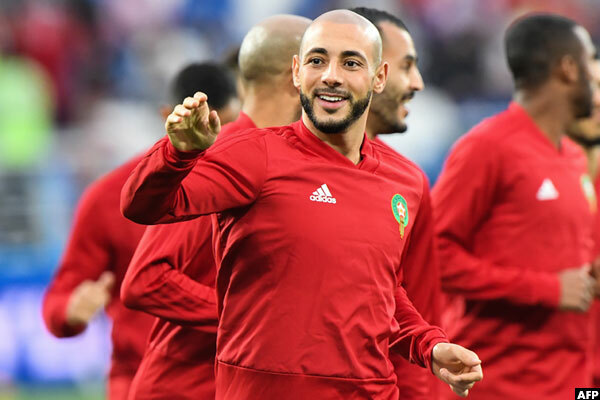 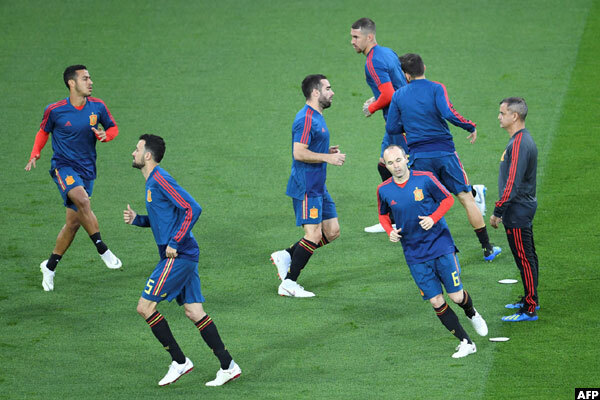 So how about some football, folks?

Spain take on Morocco in a bid to progress to the last 16. Morocco are only playing for pride now - tonight's will be their last game after suffering two group defeats.

The officials for tonight's match have warmed up and should be ready to take charge. 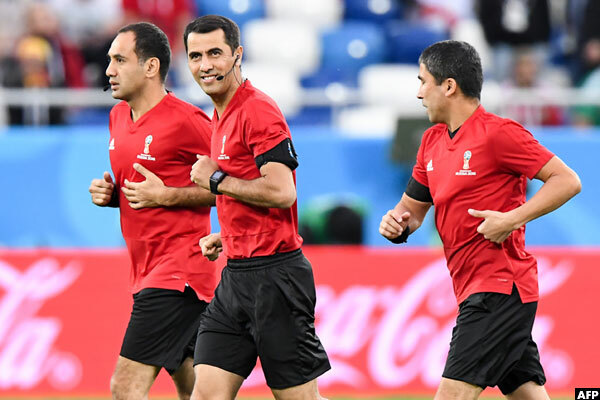 Is boycott a wise move?