Keeping healthy with yoga
Next Story

The 75-year-old Catholic mission health facility located at Nkozi, 82km on the Kampala-Masaka Road is the only major hospital between Masaka and Kampala.

The 75-year-old Catholic mission health facility located at Nkozi, 82km on the Kampala-Masaka Road is the only major hospital between Masaka and Kampala.

PIC:Prince David Wasajja on front line with other participants during the Nkozi marathon.(Juliet Lukwago
HEALTH
NKOZI - Hundreds of  people participated in the Nkozi Hospital marathon run to raise funds for the building of an Accident and Emergency Unit at the health facility.
A good number of well-wishers, friends and road users took part in the charity marathon on Saturday.
Vicar General of Kampala, Msgr Charles Kasibante who represented Emmanuel Cardinal Wamala, vice-chancellor; Uganda Martyrs University Nkozi, Fr. Maviiri, priests, nuns, Masaka district chairman Jude Mbaabali, friends and locals are some of the people that took part in the 3 Nkozi Hospital marathon.
The run featured Buganda's Prince, David Wassajja.
During the marathon, National Social Security Fund (NSSF) donated sh10m to the noble cause.
NSSF PRO, Barbara Amil, on behalf of NSSF promised to continue helping the hospital.
"It is very neccesary that Nkozi hospital acquires these facilities to accommodate as many patients as posssible due to the many accidents on Masaka High way." she said.
The 75-year-old Catholic mission health facility located at Nkozi, 82km on the Kampala-Masaka Road is the only major hospital between Masaka and Kampala. 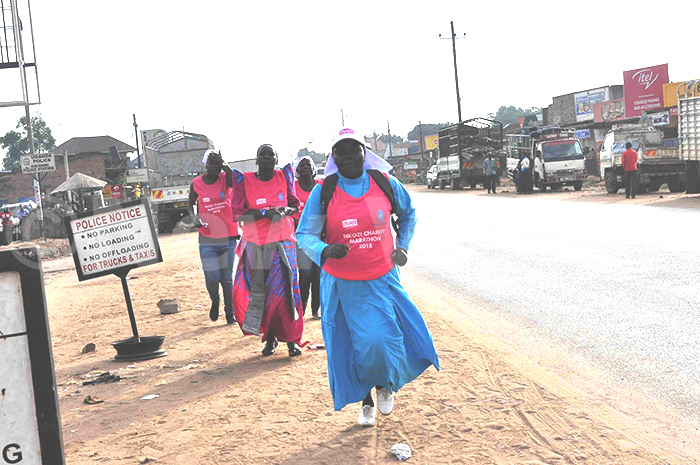 One of the nuns and locals who participated in Nkozi Marrathon on Saturday. (Credit:Juliet Lukwago)

It receives an average of 20 accident victims a week which calls for the urgent need for an emergency ward.
Msgr Kasibante, also a member of Nkozi hospital board called upon all well-wishers to make financial contributions towards the hospital's proposed accident ward.
He also urged motorists to be mindful of their duty to safeguard the lives of their passengers and pedestrians as they drive.
Meanwhile, several people have already contributed towards the construction of the facility, Movit products donated sh27m, Rotary Uganda,UPDF donated sh500,000 , Uganda Prisons and among others.
The hospital seeks support to continue fundraising for the construction of the emergency ward. According to Sisiter Teddy Nankyanzi, the hospital administrator, the construction is estimated to cost over sh2.8b.
"The unit will be constructed in phases, the whole structure requires sh2.8bm but for the first phase we need sh1.8b," she said.
About Nkozi
Nkozi hospital, is a Private Not for Profit (PNFP) Hospital owned by Kampala Archdiocese.
It was founded by the White Sisters of Our Lady of Africa from the Netherlands in 1942.
The management was transferred in 1994 to the local congregation of the Sisters of Immaculate Heart of Mary Reparatrix- Ggogonya, Kisubi.