The accident occurred at about 5:30pm at Kikonda when the bus registration number UAL 780L under Link Bus Services collided with a truck carrying cattle.

The accident occurred at about 5:30pm at Kikonda when the bus registration number UAL 780L under Link Bus Services collided with a truck carrying cattle.

PIC: The accident occured when a Link Bus collided with a truck carrying cattle. (Courtesy photo)

KYANKWANZI - One passenger was killed and at least seven others injured in a bus accident in Kyankwanzi district on Monday.
The accident occurred at about 5:30pm at Kikonda when the bus registration number UAL 780L under Link Bus Services collided with a truck carrying cattle.
The bus had left Kampala for Hoima district. The Police traffic spokesperson, Charles Ssebambulidde confirmed the accident but did not share details.
YahyaKugonza, the Link Bus station manager for Hoima confirmed that one of the passengers on the bus whose identity had not yet been established succumbed to injuries.
"The driver of the lorry carrying cattle was over speeding. He tried to evade a goat and brushed against the bus," he told New Vision.
The injured were rushed to Hoima Regional Referral Hospital. The latest incident follows a string of bus accidents that have cast light on bus operations.
On June 5, another bus accident that occurred about 10km before Kasese town in western Uganda and left several passengers sustained minor injuries and were rushed to various health facilities. 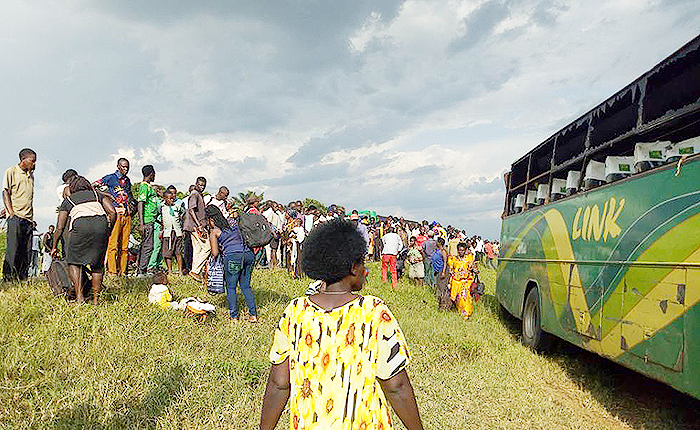 It is reported that one of the passagers succumbed to injuries. (Courtesy photo)
Two weeks earlier, 18 passengers sustained injuries when another bus, bound for Kampala fell off the road near Kikorongo junction, in Queen Elizabeth National Park.
Last month, at least 23 passengers perished when aGaagaBus registration number UAK 562L collided with a tractor registration number UAU 872M and a trailer loaded with crates of beer.
The accident happened at Nanda village, in Nyamasha parish, Mutunda sub-county, Kiryandongo district.
The bus reportedly hit the tractor before it rolled and collided with the oncoming lorry.
Two weeks earlier, three people had died on spot while two others sustained injuries in a bus accident that occurred on the Kampala-Hoima highway.
The Link Bus registration number UAM 492B was travelling from Kampala to Hoima district when it was reportedly hit by a speeding trailer carrying a wheel loader moving in the opposite direction.
The accident in Kiryandongo sparked a fresh look at bus transport operations and a raft of new traffic control measures, including installation of digital speed governors, inspection of buses to establish road worthiness and refresher training for drivers.