Taliban refuses to extend, as suicide atta...
Next Story

After the rescuing trailer loading the fuel, it went up in flames as soon as its driver started the engine.

After the rescuing trailer loading the fuel, it went up in flames as soon as its driver started the engine.

PIC: Fuel tankers burst into flames in an accident on the Iganga-Bugiri highway. (Credit: Moses Bikala)

IGANGA- Three people including a police man were rushed to Mulago hospital after three fuel tankers went up in flames at Busesa village, 14km along the Iganga-Bugiri highway.

The three were rushed to Mulago hospital with multiple burns on their heads, hands and stomach.

According to an eyewitness, Sande Nkoobe, two of the injured people were burnt as they attempted to siphon fuel from the tanker after they overpowered Police which had been deployed to guard the tanker, registration number KCD 3474. The tanker had been involved in an accident yesterday at around 8.30pm just opposite the scene where over 200 people were buried after being burnt to ashes as they siphoned fuel from a tanker that had been involved in an accident.

Nkoobe said another fuel trailer, registration number UAN 037L that was coming from the opposite direction towards Bugiri, decided to have a stopover in order to watch what was happening, but instead also burst into flames.

The first fuel tanker belonging to GAZ  that was heading to Kampala from Busia lost control and fell into a ditch along side the road, prompting the owners of the company to hire another fuel tanker to load the remaining fuel to Kampala to avoid making more losses.

However, the second trailer after loading the fuel, went up in flames immediately the driver started the engine.

The inured have been indentified as Joseph Musoga, Sadiq Mugwisa and Opio Sam, a Police officer.

Transport was paralysed for over three hours as traffic was blocked to avoid fatalities as a result of the huge fire from the fuel tankers.

The Iganga Police commander, Nassibu Nditta, cautioned members of the public, especially those residing  in Busesa trading centre, against siphoning fuel from tankers that are involved in accidents to avoid losing their lives.

"Ten years back, over 200 people from the same area lost their lives as they were siphoning fuel from a tanker that had been involved in an accident just opposite here," he said

Police fired several times in the air to disperse locals after a group of youths started hurling stones at Police for denying them a chance to siphon fuel from the tanker that was up in flames. 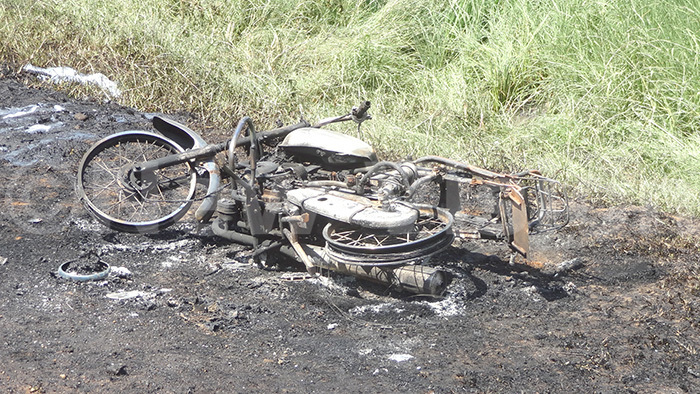 A motorcycle burnt to ashes at the scene of the accident 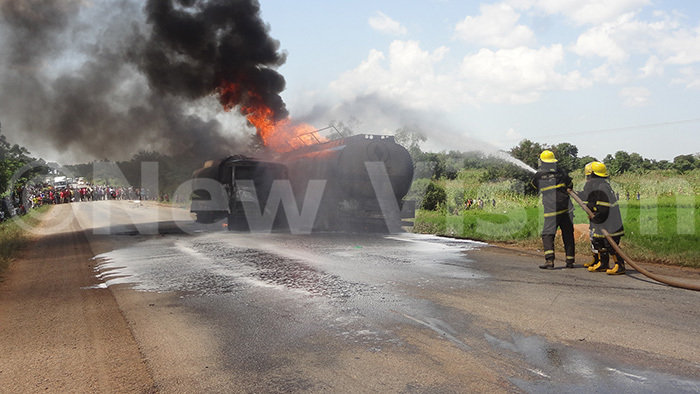