The First Lady, graces the Day of the Afri...
Next Story

According to Robert Kakyebezi, the Mbarara Municipality Mayor, in a month, atleast two people die from this raod.

According to Robert Kakyebezi, the Mbarara Municipality Mayor, in a month, atleast two people die from this raod.

PIC:Robert-Kakyebezi(yellow-tie)-Judith-Owembabazi-Housing-Bank-Marketing-Manager-and-CEO-Eng-Keneth-Kaijuka-painting-Mbarara-zebra-crossing-on-Friday.(Credit: Adolf Ayoreka)
ROAD SIGNS
By Adolf Ayoreka
MBARARA - Roads with faint or no zebra crosings are one of the leading causes of the rampant accidents that have taken many lives of people in Mbarara.
Many people tend to lose their lives due to poor discipline among the road users as well as roads in poor conditions.
National Housing; in partnership with Housing Finance Bank painted several zebra crossings on four major roads to reduce accidentsin Mbarara region on Friday.
One of the major dark spots that have claimed lives of many are found on Ntare.
According to Robert Kakyebezi, the Mbarara Municipality Mayor, in a month, atleast two people die from this raod.
Kakyebezi noted that the discipline among the road users is still wanting due to the  fact that they don't adhare to the traffic road signs which are put on the road, he said this has made the country to lose very many people in road accidents.
"We have painted these zebra crossings but we still have a challenge, people need to be sensitised on how to use these road signs and symbols.
"Other dirvers don't respect zebra crossing, they don't even stop to allow people cross, in one of our projects I have put a traffic light on Buremba road to use it as pirot study to monitor whether drivers and other road users will learn how these traffic lights are operate but people do not respect it," Kakyebezi said. 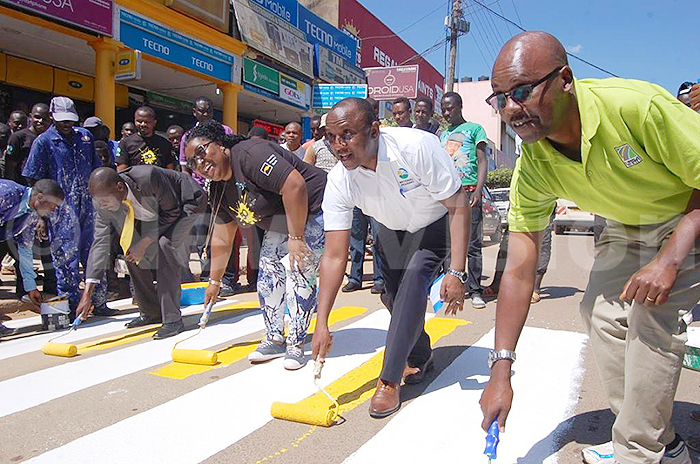 Kakyebezi added that they have already instructed traffic officers to use the long arm of law and arrest whoever fails to respect Zebra crossing and traffic lights.
"I appreciate the work by National Housing because some of this work is supposed to be done by council but sometimes we are constrained financially."
Mbarara high street, Opposite Centenary Bank, Ntare road near Bank of Uganda on Mbarara Ntungamo road and opposite Mbarara Police station are some of the roads that were painted with the zebra crossing.
Eng. Keneth Kaijuka the Chief Executive Officer for National Housing and Construction Company Limited noted that this is apart of the Corporate Social Responsibility to create awareness to the road users on the importance of Zebra crossing.
He added that as Mbarara Municiplity moves to attain a city status, there is need for a well established infrastructure and improved road safety to ease transport and this should be attained by sensitising the public.
However, there has been pulling of strings between the Mbarara Municipality authorities and councilors on how to reduce accidents on some roads like Ntare road, councilor for the last two years have been moving that council should put humps on Mbarara-Ntare road to reduce on the over speeding of cars, Even last year students of Ntare staged a strike after a car knocked one of the student of the same school on the same road and last easter a business man identified as Eng. Patrick Basiga was knocked dead by a speeding tipper truck, but the authorities have paid a deaf ear.