Morocco gift Iran with an injury time own goal in Group B's opening match. Here is how to game unfolded.

Morocco gift Iran with an injury time own goal in Group B's opening match. Here is how to game unfolded.

So that brings us to the end of today's Focus on Africa coverage at this edition of the World Cup in Russia.

I will be back tomorrow (Saturday) for the Croatia v Nigeria Group D match.

It is not the kind of start to this tournament that Africa had hoped for.

Egypt started off with a 1-0 defeat to Uruguay - courtesy of a late goal.

Morocco have also been beaten deep in the game by Iran.

Other African nations in the competition are Nigeria, Senegal and Tunisia. 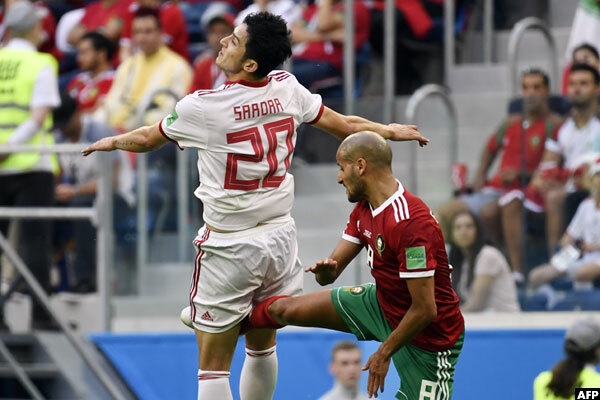 
It has come late. The winning goal. It has been an own goal, but Iran will care less. They have the win.

This Group B clash has ended Morocco 0  Iran 1. 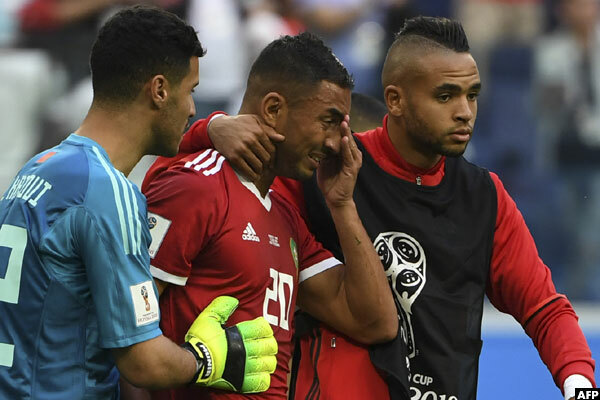 An own goal by Aziz Bouhaddouz gifts Iran with what is surely the winner! 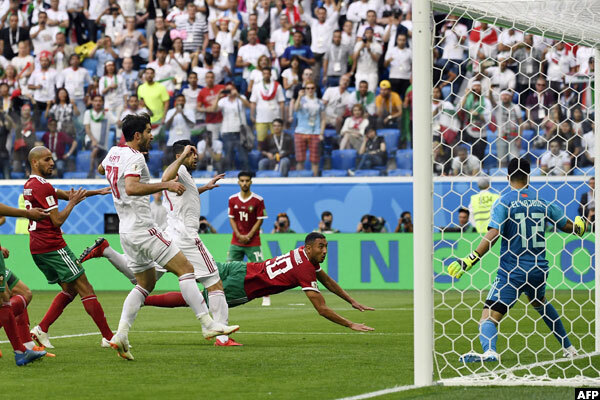 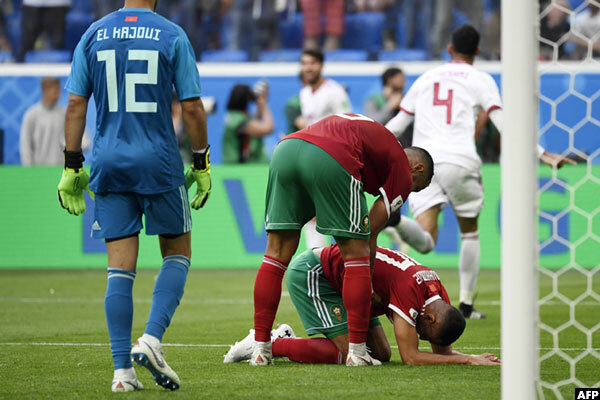 We have SIX minutes more to play.

We have clocked 90 on the clock and there is no goal yet.

Let's see how many minutes will be added.

The second half not been really smooth. It has been dogged by several stoppages for freekicks and substitutions - mostly due to injuries.

Such a bump road.

Renard throws on Da Costa and takes off Harit, who had looked one of the most likely players to find the back of the net.

Another brilliant save by the Iranian goalkeeper to keep the game on level terms.

Do we have a winner tonight?

There is more interruption in the flow of the game as another substitution has to be made. Ebrahimi cannot play any further after receiving a knock in his side. Montazeri is the man that comes on.

One brother off, another on.

The Amrabat brothers trade places after one gets injured while vying for the ball on the right flank.

Meanwhile, El Kaabi is off and on comes Aziz Bouhaddouz. 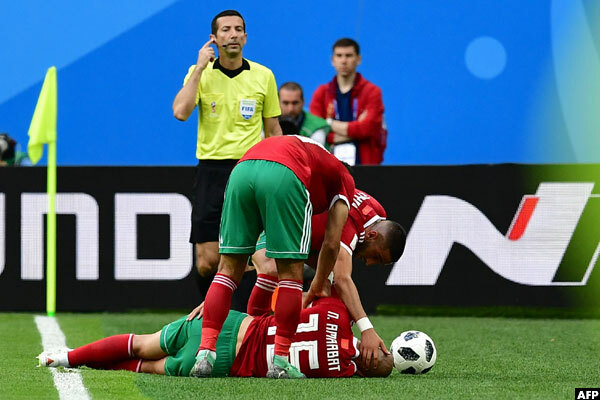 The Iranians make reforms, with 24 minutes remaining on the clock.

Skipper Masoud Shojaei takes a bit of time as he peels off his captain's armband to hand it over to a teammate before coming off.

Taremi Mehdi trots onto the pitch in his place - receiving a huge welcome from the Iran support.

The Atlas Lions appear to have settled for a quieter approach - far from their first half incision and aggression.

So far, there has not been any shot on target from either side. 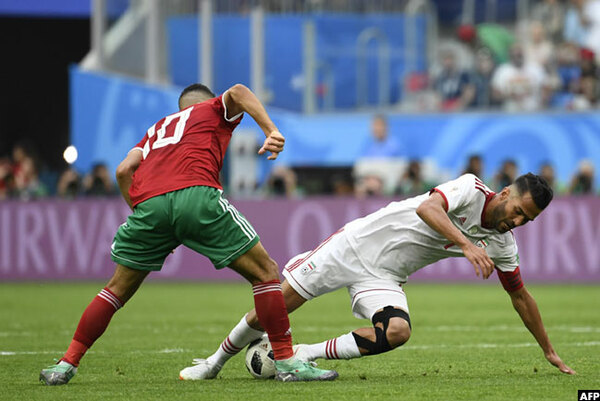 In the early game between a Mohamed Salah-less Egypt and Uruguay, we saw the only goal came one minute to full time.

It does not look any different here.

Could they have copied the same script?

Whatever the case, both sets of fans are anxiously waiting for a goal.


Iran, wearing an all-white outfit, get the ball rolling . . .

Morocco, on the other hand, are wearing maroon shirts and green shorts.

It is a joyous, colourful atmosphere inside the Krestovsky Stadium as fans await the start of the second half. 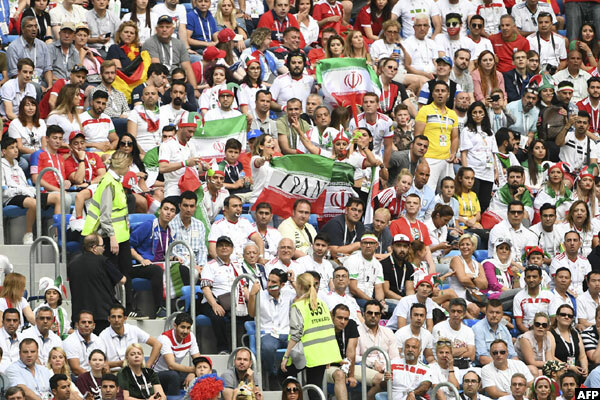 Morocco came into this game as favorites to win the clash. But going with the proceedings in the first half, it is safe to say that Iran are no pushovers.

The Asians carry the sort of threat in attack that can trouble many defenses. The Moroccans nearly fell victim to such lethal surge late in the opening half. 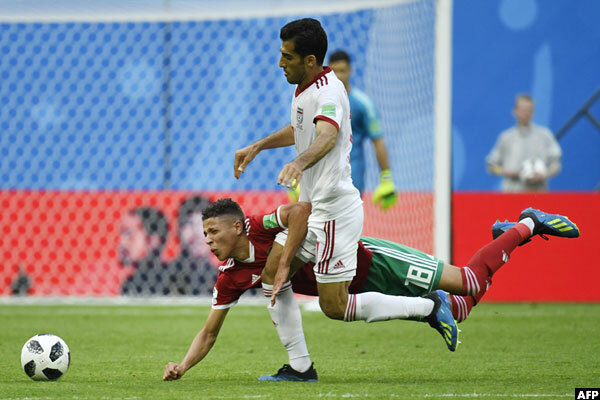 
That is it for the opening half. Goalless in St. Petersburg.

Time for some oranges and pep talk.

On the evidence of the first 15 minutes of this encounter, I did not see this coming. Iran may have managed to slowly claw their way back into the game, but they are looking to wrap up this half with a bang.

A series of exchanges starting from the middle of the field end with Sardar Azmoun left one-on-one with Moroccan keeper Munir Mohamedi. But the goalie sticks out his leg to deny the marauding striker.

That's a mighty save!

For these two sides, winning today will be very, very important.

Reason is, they are pitted in the same group as Spain and Portugal, who play later today. 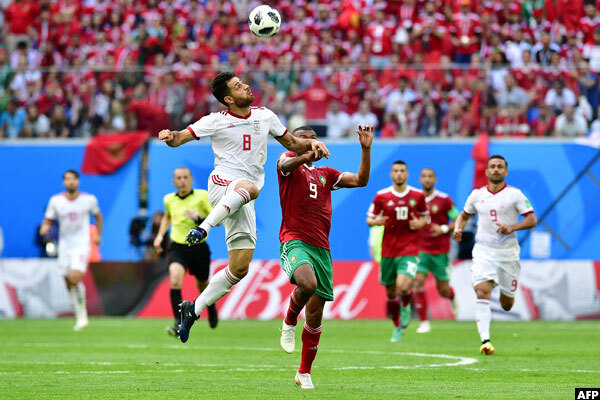 On the half-hour mark, we are seeing the game settling into a balanced affair.

Morocco's coach Herve Renard is sensing his side are beginning to allow their opponents into the game. From the sidelines, he is bellowing instructions to the players - of course he is wearing his trademark white shirt.

Renard has seen his side's ball possession chipped down to 65% over the last 15 minutes. 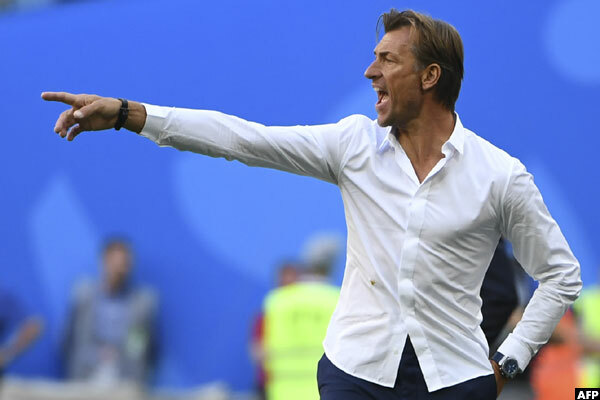 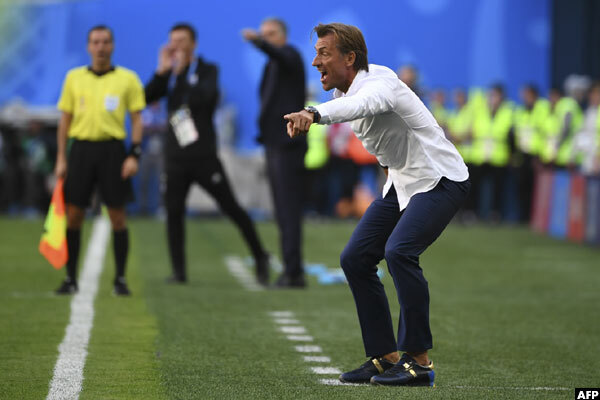 After a horrid opening minutes, Iran are beginning to find their footing.

But theirs is a huge task, as they are playing a side who have only conceded once in their eight qualifiers.

Iran, meanwhile, have made it consecutive World Cup finals for the first time ever.

What a scramble in the box!

A floater of a cross is sent into the Iranian box, with the intercept setting off a series of scrambled hits and blocks, until the ball is finally cleared out of danger.

We should have been reading 1-0 for a scoreline. Surely!

If you haven't watched a game that keeps you on the edge of  your seat, try this one.

From the word go, the Moroccans were keen in dictating matters in the pitch - and they have done just that, unsettling Iran's back line.

Infact, Iran's Karim Ansari Fard has had to tussle it out with opponents Noureddine Amrabat and Hakim Ziyech 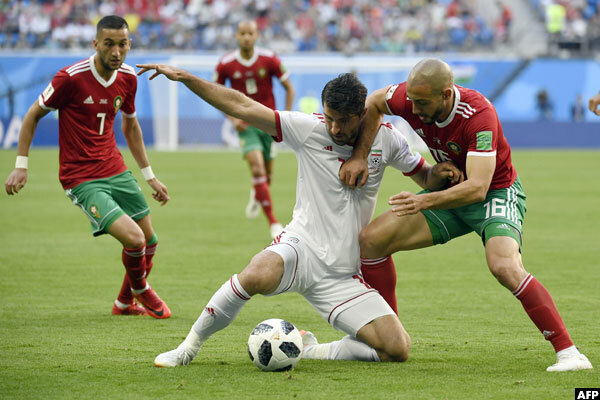 In the first 10 minutes of this Group B opening match, they have enjoyed 81% of the ball possession and Iranian keeper Alireza Beiranvand has had to make some bit of saving so far. 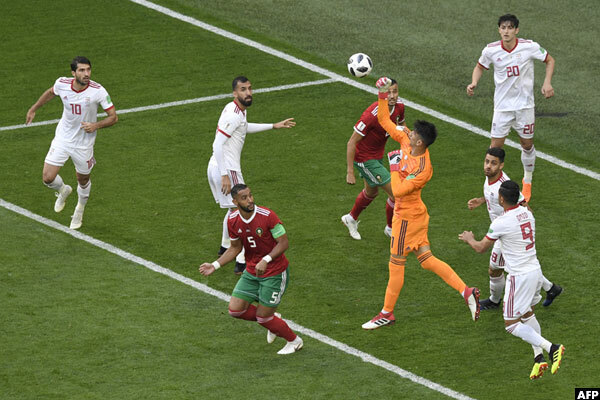 Now this is a positive start by Morocco, who are happy to dominate proceedings early in the game.

The north Africans are quick on their feet and did cause plenty of early trouble for the Iranians, who are yet to steady their ship.


And we are underway in St. Petersburg.

The crowd inside Krestovsky Stadium has turned up the volume.

This one promises to be a cracker.

The last time Morocco took part in the World Cup finals was in 1998.

A lot has happened inbetween then and now. 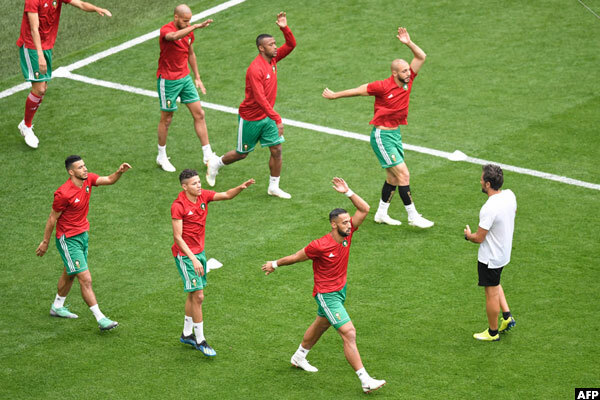 The Pharaohs of Egypt, playing without their star Mohamed Salah, suffered defeat at the hands of Uruguay in their opening Group A game.

After holding on for most part of the game, the wheels came off for Hector Cuper's men as Jose Gimenez nodded the winner in the 89th minute. 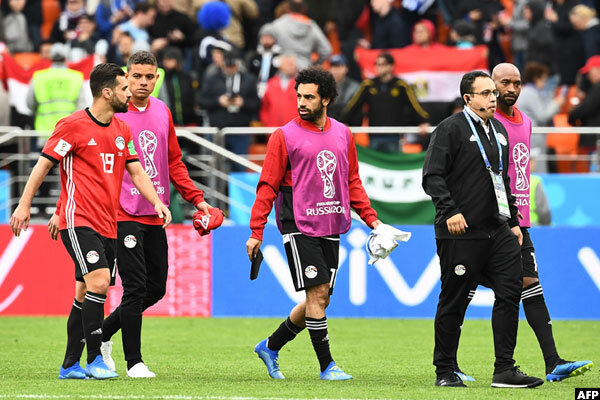 Could that come with a bit of good luck? 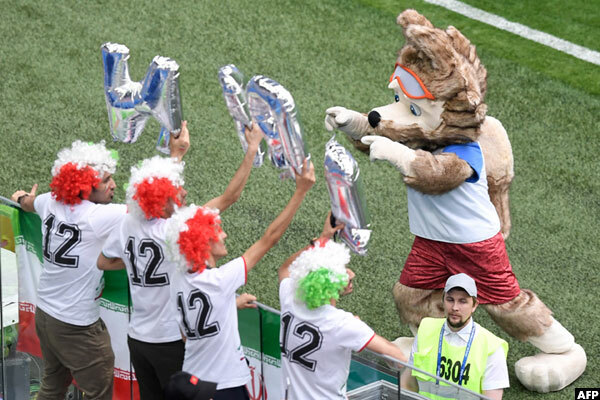 Ahead of kickoff at 6pm Ugandan time, I should remind you that Africa is represented by five nations at this edition - the highest number ever.

Earlier in the day, Egypt opened Africa's account, but with defeat against South American side Uruguay in Group A.

You can quickly check out what happened in Egypt's game HERE.

A warm welcome to you all to this page, where I will keep you updated with the action of Morocco v Iran.

Glad you are here. 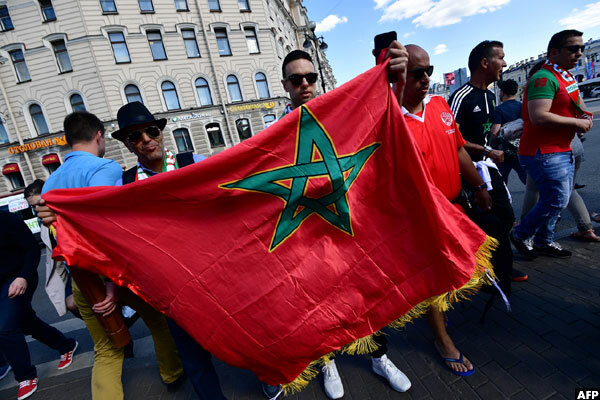 Kids abused by those they trust