Fans to watch the World Cup with ease
Next Story

PIC: Airtel MD V.G Somasekhar (left) presents a cheque to Buganda Katikkiro Charles Peter Mayiga as Second Deputy Katikkiro and Minister for Education Twaha Kigongo Kaawaase looks on during the launch of the 14th edition of the Masaza Cup. (Credit:Michael Nsubuga)
MASAZA CUP
Date: June 23
Venue: Buwekula
KABULASOKE - Defending champions Gomba will take on Buwekula county in the opening match of this year’s Airtel Masaza Cup tournament slated to start on June 23 in Kabulasoke.
The Kabaka of Buganda, Ronald Muwenda Mutebi will kick off the 14 edition of the tourney since its revival in 2004.
According to the chairman Masaza committee, Sulaiman Ssejjengo, the winners of the tournament will walk away with a prize package worth sh10m while the runners up will get sh7m; with the third placed team and fourth taking home sh5m and sh3m each respectively.
The top scorer will not only get the golden boot award but also a brand new Yamaha Crux bike. 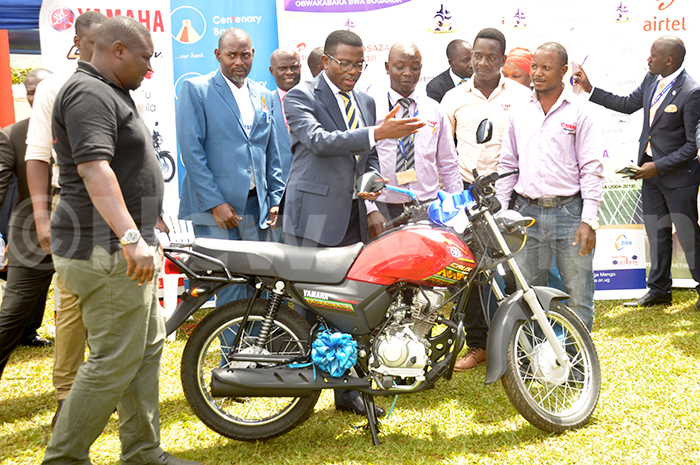 New rules including a player not featuring for any side and in the tournament for more than four years and not more than three players transferring from one county to another at the same time among others will be enforced starting with this year’s event.
Tournament sponsors, Airtel and Centenary Bank on Wednesday unveiled sh400m and sh70m sponsorships respectively towards this year’s event.
Addressing the gathering that turned up at the launch, at Bulange the Katikkiro of Buganda Charles Peter Mayiga who was accompanied by the Second Deputy Katikkiro and Minister for Education, Twaha Kigongo Kaawaase cautioned team managers, players and fans to ensure the tournament is free of hooliganism and fighting and warned those that could be implicated in any unsporting behaviours during the tournament that they will be dealt with.
“While Airtel is a telecom company it also deals with issues that are close to people’s hearts and football is close to our hearts sports like football that why they support the Cranes and Masaza.
"The kingdom is the bridge to the market because the World Bank tells us that 70 percent of Uganda’s economy is within Buganda so I enjoy working with Airtel because of their business acumen,” Mayiga said.
He emphasized the importance of sports in promoting good health and in the rebuilding of the kingdom and the country at large before he handed over sets of jerseys and 5 balls to each of the sub counties’ representatives.
He also hailed Centenary Bank for partnering with the Masaza and urged the king’s subjects to support the bank which is indigenous and supports the kingdom’s projects.
Airtel Managing Director V.G Somasekhar hailed the partnership saying: “there is nothing that unites Buganda to Uganda than football and that the company was well intergrated into the country and culture and we are very grateful to be part of the tournament. 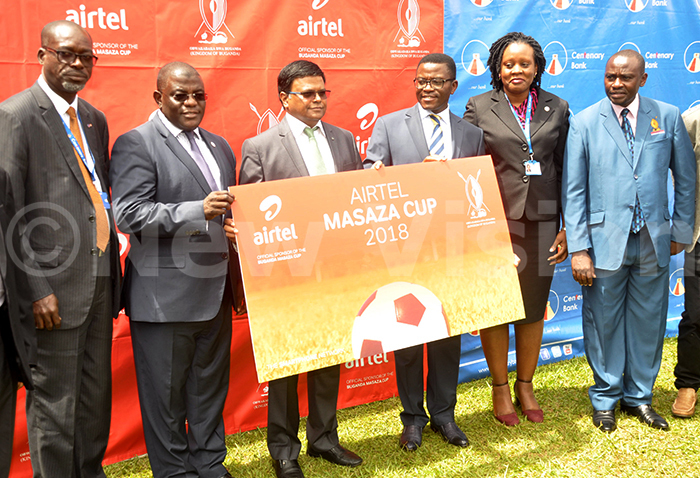 “There is something special about Airtel and football because we support it from the grassroots up to the Masaza and Cranes and we have seen football scale the heights in the country.
"We are grateful for the opportunity and we shall continue giving back to the community through football,” Somasekhar said.
Centenary Bank Managing Director Fabian Kasi said their commitment to the Masaza tournament is well documented since their announcement of a sh210m three-year sponsorship to the event last year.
“Our participation in this tournament is part of our Corporate Social Responsibility and we believe it will provide us with an opportunity to engage with the people of Buganda,” Kasi said.
Buganda Sports Minister Henry Ssekabembe urged the organisers not to take the growth of the tournament for granted but ensure that the partnerships they have with the sponsors is strengthened.
The tournament is sponsored by Airtel, Centenary Bank, Majestic brands, BBS TV, Yamaha Clux, CBS FM.