Pastor's wife who faked own kidnap arrested
Next Story

While the destination was not established, some reports indicated that it could be Naggalama Police Station in Mukono.

While the destination was not established, some reports indicated that it could be Naggalama Police Station in Mukono.

KAMPALA - Mukono Municipality MP Betty Nambooze was Wednesday early afternoon transferred from Jinja Road Police Station to an unknown destination, after being held there for some time.

Amid tight security, the legislator, wearing a tracksuit, was later led down the stairs flanked by her lawyer MP Medard Sseggona and other Opposition politicians, before being driven off.

While the destination was not established, some reports indicated that it could be Naggalama Police Station in Mukono district.

Police is involving Nambooze in its investigations into last week's murder of Arua Municipality MP Ibrahim Abiriga and his younger brother in Kawanda, Wakiso district.

Earlier on Wednesday, Police picked Nambooze from her home in Mukono after a long engagement with Mukono district Police commander Rogers Sseguya.

Following the exchange, she accepted to be taken for interrogation after the residents had started gathering around her home.

The legislator was then led to Kampala - inside her own car - with Jinja Road Police Station being the destination.

Once there, she was led away into one of the offices, where her lawyer, Opposition MPs and members met her.

Nambooze said she was unhappy with the way the Police had allegedly twisted Abiriga's murder investigations into a 'political scandal' just to mess up Opposition legislators like her.

Her supporters blamed the Police for treating their MP like a chiken thief, yet she is a person of a high political profile, who would have handed herself to the Police if she had been summoned.

She is being involved in line with some posts she reportedly made in connection with Abiriga while he was still alive.

The Arua Municipality legislator was gunned down Friday evening by unknown people riding a motorcycle not far from his home. At the time, he was in his Volkswagen car with his brother.

The two were laid to rest on Monday in Rhino Camp subcounty, Arua district.

President Yoweri Museveni, who attended the burial ceremony alongside his wife Janet and several other high-profile people across the political divide, condemned Abiriga's murder and vowed that the killers would be got.

Nambooze was led into her car from her home. She wore a tracksuit and sneakers

Residents were drawn into the morning episode at their MP's residence

Once granted access to their colleague, they were engaged in conversation - most likely on the way forward

Later, Nambooze would be led out of the office, flanked by her colleagues, and driven off to an unknown destination 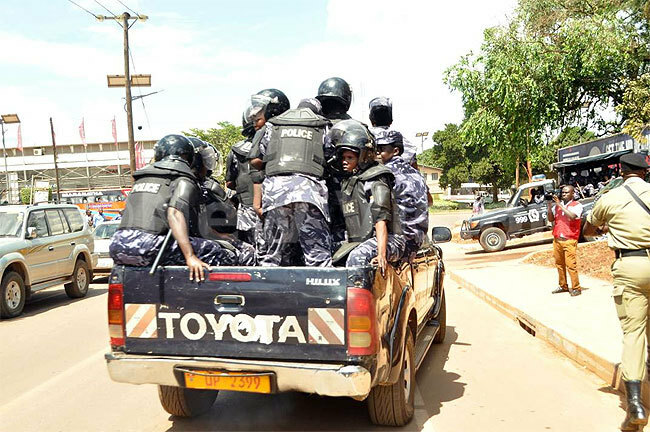 There was heavy security as the MP was whisked away