Give street children food and they will be off the streets

PIC: Street children begging from the streets of Kampala

The gender ministry estimates that there are over 200 street children in Kampala, the majority of them are from Matany and Bokora County, Moroto district.  Others towns with street children are Jinja, Mbale, Tororo, Busia, Iganga and.

Feed a Million Mouths Uganda (FAMMU), a social enterprise, has partnered with Dwelling Places, a non government organisation, to help the street children, especially those from Karamoja by providing them with high nutrition food. 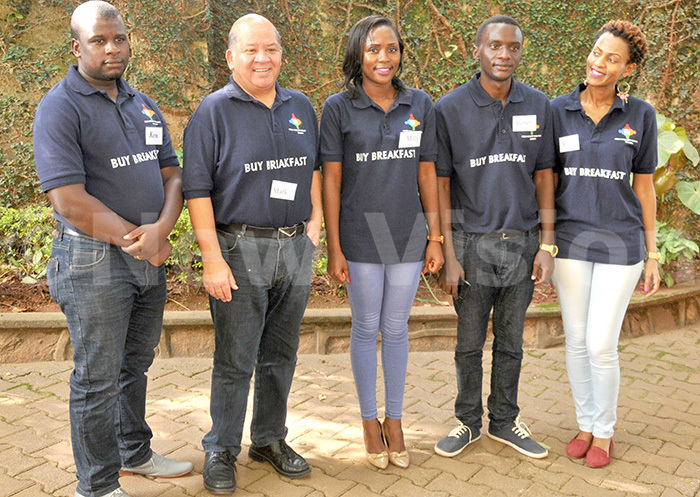 PIC: Montgomery and his team members during the event event. (Credit: Nicholas Kajoba)

Launching the partnership at FAMMU offices, in Bunamwaya, Kampala recently, the director of the firm, Mark Montgomery, said giving out money to street children is not good because it encourages them to keep on the streets.

"We started an initiative dubbed: "Buy Breakfast," that targets to feed over one million children through our high nutrition project. The project provides corn and soy blend porridge for street children and communities in the areas of karamoja," Montgomery said.

He said individuals, vulnerable families, refugees and chronically ill people will benefit from the project.

"Apart from street children, we have individuals and chronically ill persons who need food with nutrition, especially in the region of Karamoja and they cannot afford to buy it. We are partnering with other stakeholders to ensure that we provide free meals (with good nutrition) to such persons," Montgomery said.

He said they are motivated by the fact that the quality of nutrition, in the first 1,000 days of a child's life, largely determines what quality of future he will have.

"Inadequate nutrition during this crucial period, both for the pregnant mother and her baby, can have a permanent effect on the child's physical development," Montgomery said.

The communication manager of FAMMU, Milly Bayiyana,  said street children are still returning to the streets in Kampala despite numerous efforts taken to resettle them.

"We believe with other new strategies, we shall be able to re-settle most of the children," she said.

The founder of Dwelling Places, a Christian NGO, Rita Nkemba, said they Partner with CSOs to enroll the resettled children in school and work with their families to ensure sustainability after resettlement. PIC: Montgomery (right), Bayiyana (centre) and Nkemba  during the launch of the partnership at FMMU offices in Bunamwaya, Kampala. (Credit: Nicholas Kajoba)

Notice from Ministry of Works

Notice from the Ministry of Water