Trump says 'a lot of progress' made in historic Kim meeting

The two men shook hands for several seconds beneath the white-washed walls of an upscale hotel in neutral Singapore.

The two men shook hands for several seconds beneath the white-washed walls of an upscale hotel in neutral Singapore.

US President Donald Trump said Tuesday there had been a "lot of progress" in his historic talks with North Korea's leader Kim Jong Un, before the pair later signed a document together.

The first-ever summit between sitting leaders of the two Cold War foes went "better than anybody could have expected", Trump said as he strolled in the gardens of a Singapore hotel side-by-side with Kim.

Earlier, the pair shared warm words and a historic handshake as they sought to confront a nuclear stand-off and enmity stretching back decades.

The two men shook hands for several seconds beneath the white-washed walls of an upscale hotel in neutral Singapore, Trump reaching out to touch the North Korean leader on his right shoulder, before sitting down for a half-day of meetings with major ramifications for the region and the world.

The encounter was unthinkable just months ago, when fears of war mounted amid missile tests and verbal insults.

As they sat down for their tete-a-tete, the US leader -- who had said he would know "within the first minute" if a deal would be possible -- predicted a "terrific relationship" with Kim.

For his part, the North's leader referred to the two countries' history of war and acrimony, but noted the fact of their meeting showed they could overcome the past.

Sitting across from Trump at a small side table, Kim told the US president through a translator: "It was not easy to get here." 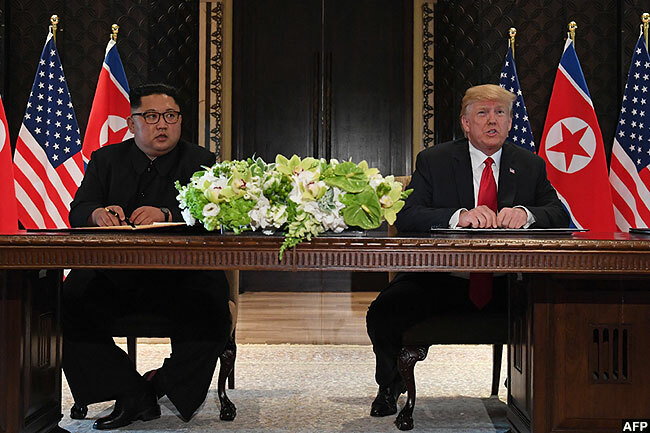 "The past worked as fetters on our limbs and the old prejudices and practices worked as obstacles on our way forward," he went on, his listener looking him in the eye and nodding. "But we overcame all of them and we are here today."

Trump responded: "That's true" before another handshake -- smiling this time -- and a thumbs-up from the US president.

After huddling for around 40 minutes, Trump and Kim were joined by senior advisors before breaking for lunch, where prawn cocktail, short-rib confit, soy-braised cod, and vanilla ice-cream were among the options.

The imagery for the high-stakes meeting was undoubtedly positive and Kim Yong-hyun, professor at Dongguk University in Seoul said: "The atmosphere of the summit looks very good."

"It will be hard for this meeting to agree on specific deals but it carries considerable significance as a starting point," he said. 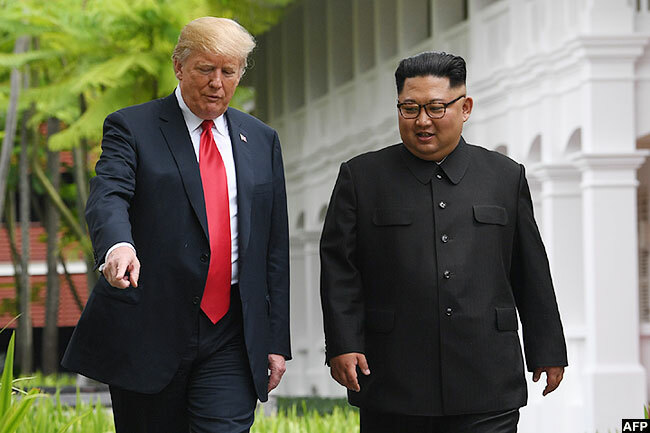 Some analysts have warned the summit could produce more style than substance and Kelly Magsamen, a former top Pentagon Asia specialist, said: "We'll see if Kim actually gives him anything more than superficial pleasantries and some good TV."

Critics said the mere fact of the meeting meant Trump was legitimising Kim -- whose regime is accused of widespread human rights abuses.

"It's a huge win for Kim Jong-un, who now —- if nothing else -—has the prestige and propaganda coup of meeting one-on-one with the president, while armed with a nuclear deterrent," said Michael Kovrig, Crisis Group Senior Adviser for North East Asia.

The warm words and positive optics seemed a different era from when Trump was threatening to rain down "fire and fury" on Pyongyang and Kim attacked Trump as a "mentally deranged US dotard", as he fired off a series of provocative weapons tests.

The Singapore summit is a potentially legacy-defining meeting for both men -- comparable to president Richard Nixon's 1972 visit to China, or Ronald Reagan's 1986 summit with Mikhail Gorbachev in Reykjavik.

But many agreements have been made in the past with North Korea that have later fallen apart.

On the table is the vexed question of denuclearisation -- a word that means vastly different things to the two parties.

It remains far from clear that Pyongyang is willing to give up its nukes -— weapons that the regime sees as its ultimate guarantee of survival.

And on the eve of the meeting, aides for both men were still scrambling to narrow yawning differences.

Secretary of State Mike Pompeo said Monday that the United States was willing to offer Pyongyang "unique" security guarantees if it denuclearises.

But the summit was more likely it is the start of a longer process of negotiation.

The discussions "will set the framework for the hard work that will follow", Pompeo said.

Born with HIV, they have healthy babies

Kakuyo the fallen hero who left an indelible legacy