HOIMA - Bunyoro-Kitara kingdom is celebrating the 24th coronation anniversary of reigning king Solomon Iguru I, who was enthroned on June 11, 1994.

Large numbers of people Monday morning queued up to enter the Karuziika palace in Hoima to attend the event. They travelled from various parts of the country to be part of the event.

Today's empango is being held under the theme: 'Transforming Bunyoro-Kitara Kingdom'.

Empango, the coronation anniversary is the first ritual the king performs during his enthronement.

According to Ashraf Mugenyi, the kabonerwa (one who leads the Bunyoro king wherever he goes), the empango ceremony is preceded by the presentation of the regalia (ebikwaato) to the monarch.

This ritual is performed by the men in charge of the regalia (Ab'ebikwaato) on the night of June 9.

The ceremony of presenting the regalia to the king is known as Okweeza and the regalia are called amahango. It is also known as the regalia-cleansing ceremony.

"The officials in charge of the regalia present the amahango during the okweeza ceremony in the night to the Omukama to prove to him that we are ready for the empango," Mugenyi says.

"The amahango include sharpened spears and drums called entimbo and other items."

Security has been ramped up at the palace


On June 10, the palace officials head to Omukama Kabalega's royal burial ground at Mparo, a few kilometres from Hoima town on Hoima-Masindi road to perform another cleansing ceremony.

On the same day, prayers are held to thank God for the gift of life given to the king and for enabling him to turn another year on the throne (okujuumura engoma).

Then, on the night of June 10, the officials in charge of the regalia hand over the ebikwaato to the Omukama, including the Tibamuliinde drum. It is at this point that the empango ceremony begins, although a few people attend.

The ceremony is known as Kuhemba.

"This is when the empango begins. We handover all the regalia to the king at 12:00am," Mugenyi says.


After receiving the regalia, the king goes to the kraal to receive a bull from Omupanyarwa (the man from the Babiito clan who enthroned him) as a token of appreciation for presiding over the kingdom.

"This takes place between 3:00am and 4:00am. The bull is slaughtered and the Omukama serves his people around at the palace, and then we sleep," Mugenyi explains.

In the morning of June 11, the Omukama goes to his bathroom (ekyambukya) for a shower before he is served breakfast.  Thereafter, donning the regalia, the Omukama and Omugo take their seats in front of palace residence to preside over the empango ceremony.

Speeches and other ceremonies have to be out of the way before 3:00pm, when the members of the Abasiita clan, who keep the Tibamuliinde drum, bring it to the king.


The Abasiita kept the drum when the Abacwezi dynasty, who ruled the then Bunyoro Kitara empire (covering most parts of Uganda, northern Tanzania, eastern DRC, Rwanda and Burundi) started breaking up in the 16th century. They handed over the drum to the Biito dynasty rulers, who inherited a disintegrating empire.

The same clan members are also said to have hidden the drum from government officials when kingdoms were abolished in 1967. Some of the kingdom's drums and regalia were confiscated in the chaos that followed the 1966 crisis.

A few minutes to 3:00pm, the Omukama and the Omugo change into the traditional bark cloth and sit in the enthronement room as they wait for the Tibamuliinde drum to be presented to them.

The members of the Abasiita clan first take the symbolic drum to a hill in front of the palace, where they perform some rituals seeking clearance from the ‘spirits' to proceed with the empango ceremony.

After receiving the permission, they move to the entrance of the palace main house, dancing to the sound of Amakondere and other musical instruments to inform the king's Kabonerwa and Omupanyarwa if the ceremony has been cleared to go ahead or not.

If it is cleared, the Kabonerwa and Omupanyarwa inform the Omukama and Omugo that the empango ceremony has been allowed and the drum is ready for striking for the function to begin.

The Abasiita are then allowed to enter the main house in the palace residence to hand the drum to the Omukama to perform the much-awaited ceremony. The empango ceremony lasts two days in the palace, during which the Omukama's subjects are served a feast known as Okwinura.

The empango dance then moves to the Omukonda, who is said to have initiated the empango celebrations in Bunyoro under Omukama Rukidi I, who ruled in the 19th century.


"Omukama Rukidi I enjoyed the empango dance so much and he asked Omukonda to ask for anything he wanted in return. The Omukonda asked the king to allow the empango to take place at his place after the main ceremony in the palace," Mugenyi adds.

From the Omukonda, the empango dance takes place at the home of the queen mother (Omugo) of the king in Bucuunga in Mparo division in Hoima municipality, where more rituals are performed to crown the year's festivities.

The celebrations traditionally lasted nine days in the king's palace in the past as people danced and feasted. It also used to be an occasion for celebrating the year's harvest and giving part of it to the Omukama. 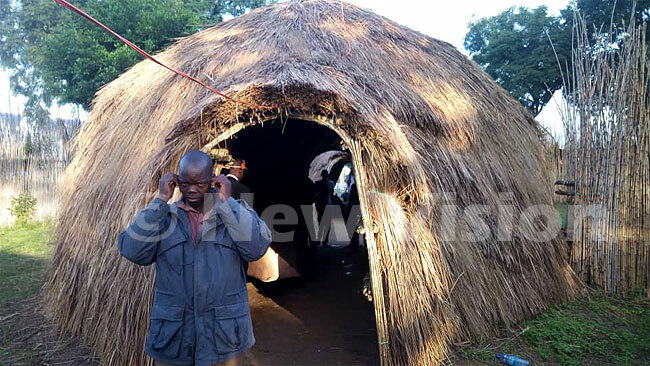