Local teams boosted ahead of the dragon boat festival

The package was unveiled during a press briefing at the Vice President Edward Ssekand's office in Kampala, who later applauded the sponsors for the sh 40m boost.

The package was unveiled during a press briefing at the Vice President Edward Ssekand's office in Kampala, who later applauded the sponsors for the sh 40m boost.

PIC: Vice President Edward Ssekandi (right) receives a dummy cheque from KEHONG Group manager Yang Hong Ping and Goodwill Ambassador Xiaoli Shu at the parliament yesterday. (Credit: David Namunyala)
Dragon Boat Festival
Date: June 16
Venue: UWEC, Entebbe
KAMPALA - There is more reason for domestic teams to perform better at the second edition of the Dragon Boat race scheduled for June 16 at the Uganda Wild Life Education Centre (UWEC) in Entebbe.
At the inaugural edition, the ill-prepared local teams failed to out-compete the Chinese teams but this year's event is likely to be different after Kehong Group sponsored the team's preparation to a tune of sh40m.
The package was unveiled during a press briefing at the Vice President Edward Ssekandi office in Kampala, who later applauded the sponsors for the tremendous boost. 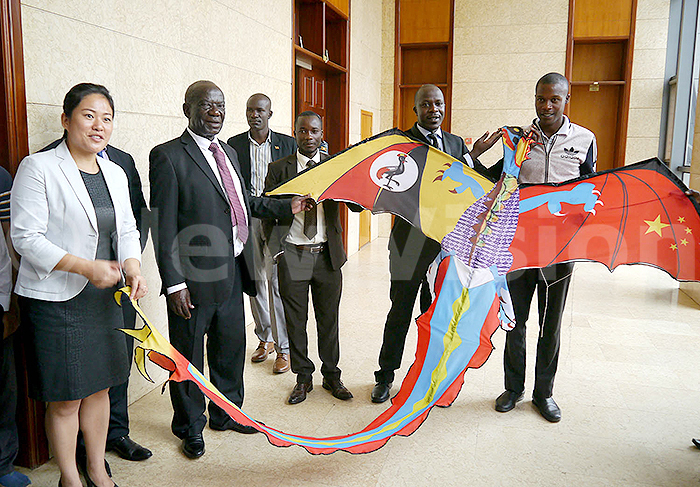 "I am glad to welcome the management of Kehong who have come to give a message towards the specific needs of the Ugandan teams preparing to participate in the Dragon Boat festival," he said.
Kehong Group also donated 200kg of the locally grown Foxtail millet flour towards the team's preparations and according to the company's Goodwill Ambassador Xiaoli Shu they would like to see local teams compete favorably next weekend.
"We believe that the contribution will lift up the confidence and preparedness of the local teams to compete favorably in the race," Xiaoli stated.
The launch was also honored by Kehong Group managing director Yang Hong Ping.
For beginners, a dragon boat is a human-powered watercraft with a crew of about 22. Among these are 20 paddlers facing toward the bow of the boat, a drummer who faces the paddlers and 1 sweep (a steerer) standing at the rear of the boat.
The festival has its origin traced way back in 278 BC in China and it was intended to commemorate a patriotic poet Qu Yuan who was devoted to his country with heart and soul but in great despair committed suicide by drowning himself in the Miluo River.
The event that has grown into one of the most important traditional festivals occurs on the 5th day of the 5th month of the traditional Chinese calendar.
This email was scanned by Bitdefender David Namunyala
Telephone: 0414337000/0312337000
Website: http://www.visiongroup.co.ug
E-Paper: https://epaper.visiongroup.co.ug

Mum always forgave those who wronged her

Why I treasure my wife...

Mum always forgave those who wronged her