PIC: The First Lady, Mrs. Janet Museveni, standing with the executive director of Ngamba Chimpanzee Sanctuary  Lilly Ajarova (second left) and Dr. Jane Goodall, a primatologist and chimpanzee expert. Left is the minister for tourism, Prof. Ephraim Kamuntu at Speke Resort Munyonyo. (Credit: Photo by Eddie Ssejjoba)
NGAMBA AT 20
At every official event in the country, it is a requirement that a national and regional anthem is sung. But, what happens when an event celebrates a Chimpanzee? People screech and grunt like the primate in addition to the two anthems.

This is what happened at Speke Resort Munyonyo when Ngamba Chimpanzee Sanctuary celebrated 20 years of existence. It was a celebration to mark 20 years of protecting and caring for the endangered species.

The conservationists, upon completing the usual rituals of singing the national anthem decided to mimic the near human ape.

According to Lilly Ajarova, the Ngamba Chimpanzee Sanctuary executive director, chimps have a 98% DNA resemblance with humans.

Led by officials from Ngamba, the whole room grunted in honour of the chimps.

Dr. Jane Goodall, a pioneer researcher on chimps and a nature conservation activist, entertained the officials with demonstrations on how male and female chimps greet each other.

"Male chimps are intimidating while the female ones are meek," she said, while guiding the night's emcee Dr. Mitch Egwang to act as the Chimp Alfa while she meekly and softly grunted in need for his affection.

In response, Egwang, just like the male ape, patted adorably Goodall's  head, affectionately rubbed her head and did the chimp love embrace.

The audience broke into a thunderous laughter that drew in the first lady, Janet Museveni, who is the patron of the chimp sanctuary.

Mrs. Museveni contributed sh30m towards the establishment of an endowment fund for the protection and care of the chimps at Ngamba.

Through various contributions from friends of the chimps, interested individuals and organisations, Ngamba was able to raise over $,26,000 (about sh96m). However, the aim is to raise $1m (about sh3.7b).

"The funds will enable us feed the chimps, provide veterinary care, train staff to give the chimps the necessary care and develop the infrastructure for chimps," said Ajarova. 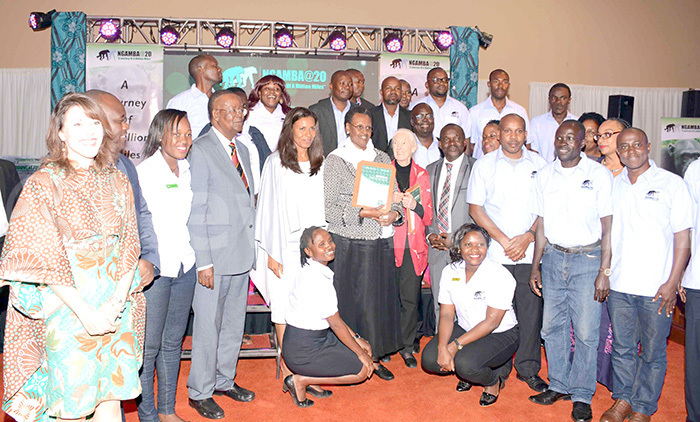 Mrs. Museveni with Ngamba Chimpanzee Sanctuary staff and other wildlife conservationists. On Janet Museveni's left is Dr. Jane Goodall and on Janet's right is Ajarova and Kamuntu. (Credit: Eddie Ssejoba) 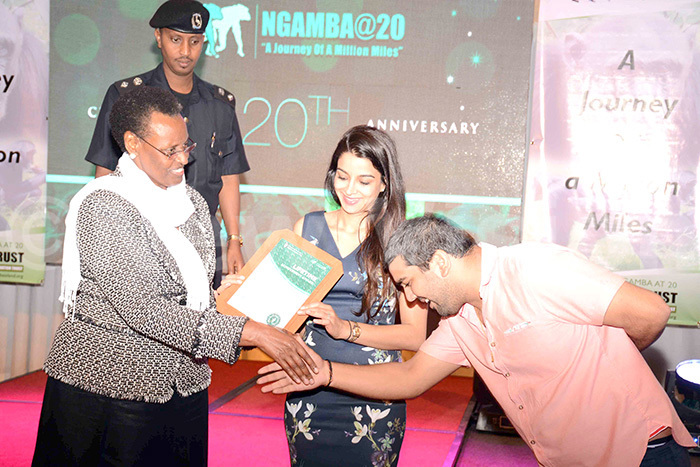 Mrs Janet Museveni handing over an accolade to Rajiv Ruparelia and his wife Naiya for supporting the Ngamba Chimpanzee Sanctuary. Rajiv offered the venue and dinner for the guests during the celebrations. (Credit: Eddie Ssejjoba) 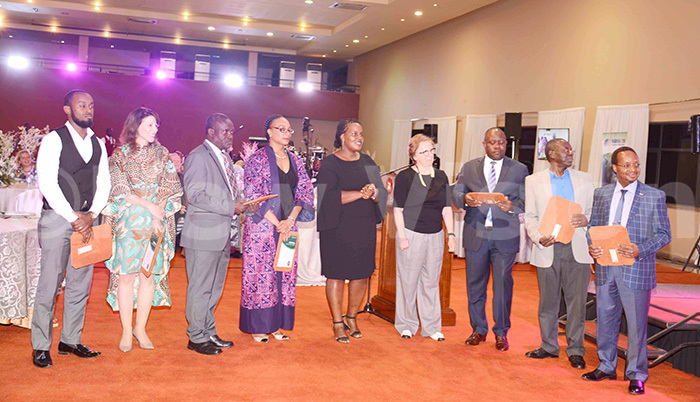 Some of the people who were recognised by the Ngamba Chimpanzee Sanctuary for their contribution towards saving chimpanzees. (Credit: Eddie Ssejjoba) 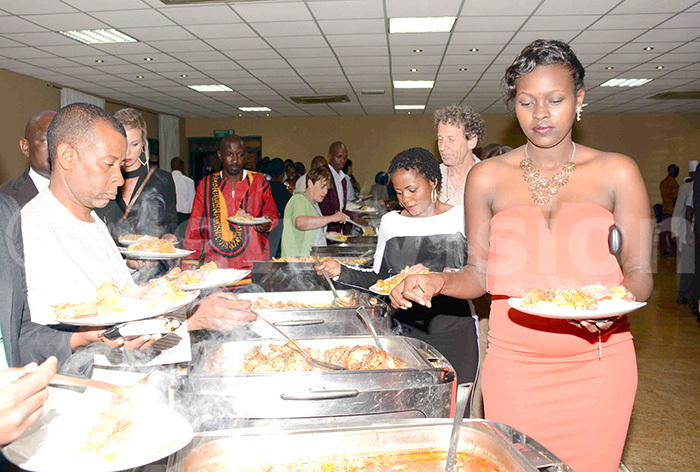 Guests were treated to a sumptuous dinner. (Credit: Eddie Ssejjoba)

The theme of the celebration was ‘A journey of a thousand miles'. The event attracted officials from the donor communities, tourists and conservationists whose efforts have been towards the conservation of the chimps.

In her remarks, Mrs. Museveni emphasized the need to educate the youths on Uganda's wildlife to make them appreciate the conservation efforts.

"I felt then and even now that it is important for us as a country to educate our young generation about the animal population Uganda is blessed with so that they know them by name and feel proud of that as our inheritance and then feel duty bound to protect our animal population," she said.

She lauded Goodall for casting light on the dangers of destruction of not only nature, but also on the near extinction of the chimps.

Goodall, whose passion for chimps made her an activist for their conservation and preservation, used the night to relive her first love for apes that began with just reading a children's comic book Tarzan.

"After reading the book, I fell in Love with Tarzan. Unfortunately, he married a wrong Jane," she said.

She said because of her love for apes, she took up a job as a waitress to save money to travel to Africa and find her ‘Tarzan'.

With the help of an archeologist, Dr. Louis Leakey, she was able to penetrate Gombe forest in Tanzania where she spent four months before winning the primates' love.

Through her connection with the chimps, she came up with a ground breaking research which placed the endangered species on a global forum.

The night was crowned with awards given to people who have made contribution to the conservation efforts in the country. These among others included Vision Groups' Gerald Tenywa. 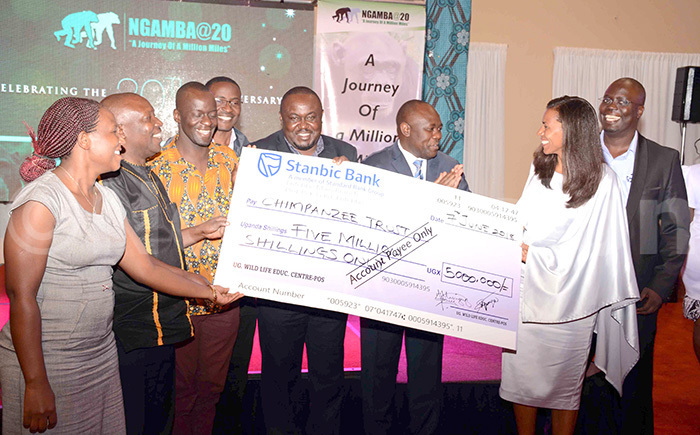 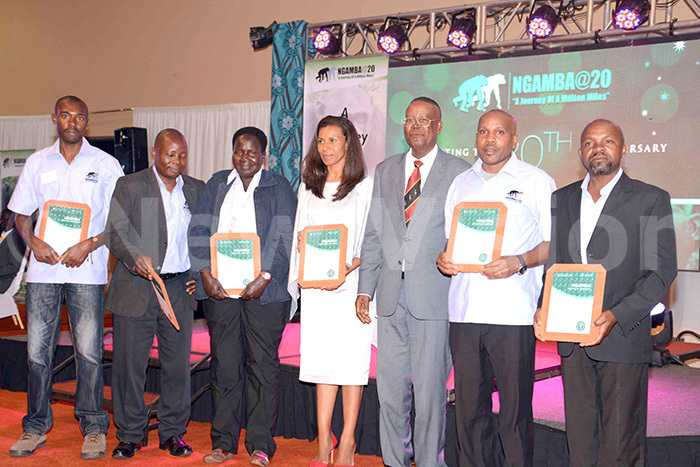 Some of Ngamba Chimpanzee Sanctuary staff who were recognised for their tireless work at the sanctuary, pose for a photo with Kamuntu. (Credit: Eddie Ssejjoba) 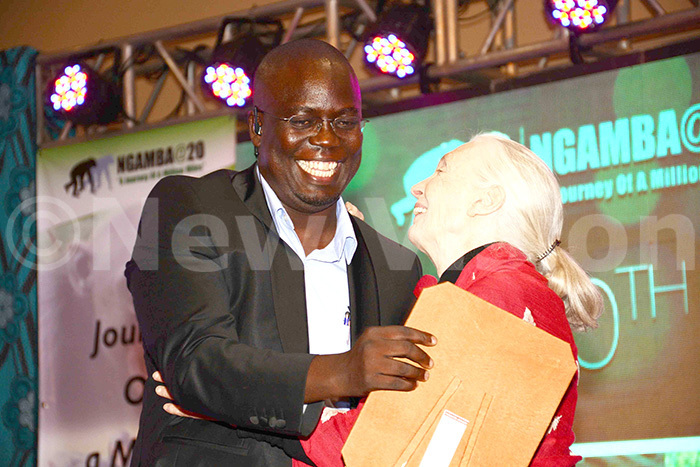 Pregnancy Forces 20 Out Of School

My daughter, my wealth: The plight of Namutumba's child mothers