MENU
Road traffic crashes in Uganda: The Ugandan flag should be at half-mast all year-long
Previous Story

The centre will help the institute expand on its research in areas of cancers, diabetes, stroke new and re-emerging infections

The centre will help the institute expand on its research in areas of cancers, diabetes, stroke new and re-emerging infections

Uganda Virus Research Institute (UVRI) is to construct a €850,00 (sh3.6bn) clinical research centre, which is going to act as a research centre for science scholars.

The centre is to create an integrated, multidisciplinary facility where patients' rooms, clinical research labs, and support spaces, are designed to ensure efficient and effective patient management.

According to the director of the MRC/UVRI, Pontiano Kaleebu, the centre will help the institute expand on their research in areas of cancers, diabetes, stroke new and re-emerging infections.

"We are going to carry out of research in Non-Communicable Diseases (NCDs) especially cancer, diabetes and stroke which are killing people today in high numbers. It is better to understand how cancer came about , you can only do that before people develop it and find out how it can be prevented,'' Kaleebu said.

Kaleebu revealed at the ground breaking of the facility that in partnership with the London School of Hygiene and Tropical Medicine (LSHTM) they will carry out research in the increasing NCDs.

Speaking during the launch of the UVRI/MRC LSHTM transfer and laying of the foundation stone for the proposed centre in Entebbe, Kaleebu said MRC in the United Kingdom made a decision that working closely with universities, allows scientists to carry out more research. 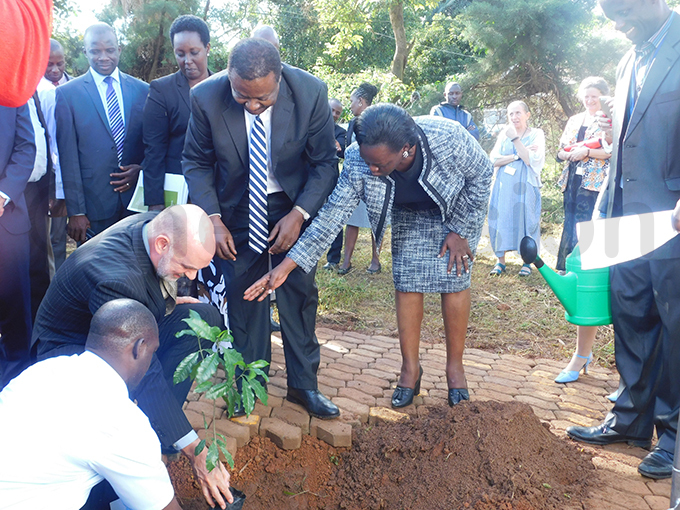 "We hope that with the new clinical centre we shall carry out more research and career development '' he added.

The MRC has made significant contributions in providing key information on the extent of epidemics in the rural areas and among key populations, social behavioural studies, prevention and care research.

UVRI is well known for discoveries of new viruses especially those transmitted by mosquitoes and other insects. In the recent past, UVRI has made significant contributions in research on HIV/AIDS and in emerging and re-emerging infections.

The health state minister in charge of general duties, Sarah Opendi, is optimistic that the partnership will bring even more opportunities for research, adding that this will not benefit only UVRI.

The British High Commissioner to Uganda, Peter West, saluted the UVRI team saying that the UK government has had a long working relationship with Uganda, adding that there is a lot that needs to be done in the country.