MENU
Why you should avoid unskilled hairstylists
Previous Story

Taxi UG: When your taxi driver buys their ...
Next Story

What was a residential compound is jammed with statues of Kabakas, Arab traders, missionaries, colonialists and ordinary mortals who have impacted the tribe.

What was a residential compound is jammed with statues of Kabakas, Arab traders, missionaries, colonialists and ordinary mortals who have impacted the tribe.

PIC:The Arab traders,Missionaries and conservationists make Buganda a mixed grill of cultures and beliefs. (Credit:Titus Kakembo)
TRADITION AND CULTURE
MUTUNDWE - The wealth of Buganda history has been documented in Semagulu Museum in Mutundwe.
What was a residential compound is jammed with statues of Kabakas, Arab traders, missionaries, colonialists and ordinary mortals who have impacted the tribe.
"Each of these art works cost more than sh400000 to sculpt," revealed the brains behind the venture John Sempebwa. "This is besides feeding and transporting the artists. The three year work is the work of Muteesa University students of fine art."
Contrary to expectations, the reception is fried coffee berries served in a basket.
Whoever picks a berry and begins nibbling it indirectly expresses being ready to listen to the oratory. This is washed down with a chilled bottle of banana juice. 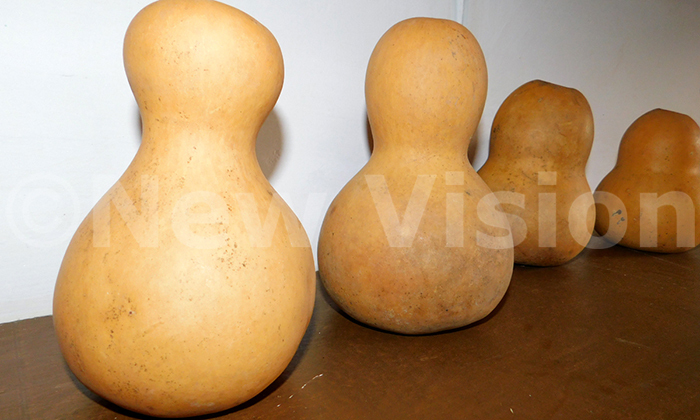 A sip of Mwenge Muganda trigeers the poetic tongues into motion and renders limbs rubbery when it comes to dancing.(Credit:Titus Kakembo)
"Make yourself comfortable," Sempebwa ushers guests to three legged and the basket stools. "It is an informal museum that conjures fireside oral literature. I hope you give me more than three hours of your time and come on board a roller coaster of Buganda though 700 years."
The starter was the first Muganda Kintu falling head over heels in love with Nambi.
At this point, eye brows of listeners are raised in shock about the myth which is interwoven with real life narratives when character vanish, revenge and dramatic justice prevails.
"It is Arab traders, missionaries locking horns with traditional leaders that contributed to what Buganda his today," says Sempebwa.
"Our ancestors were torn between Islam, Christianity and our own cultural ways of lubale (traditional beliefs.)"
Another guide Bashir Muwonge takes over the narrative in a low tone. He says pointing at Field Marshall Idi Amin Dada, is not remembered for making Uganda an Islamic state or commanding raid of the palace.
"Because Buganda before Amin's regime was once an Islamic state," revealed Muwonge. "Greeting was then Salaam Aleykum. 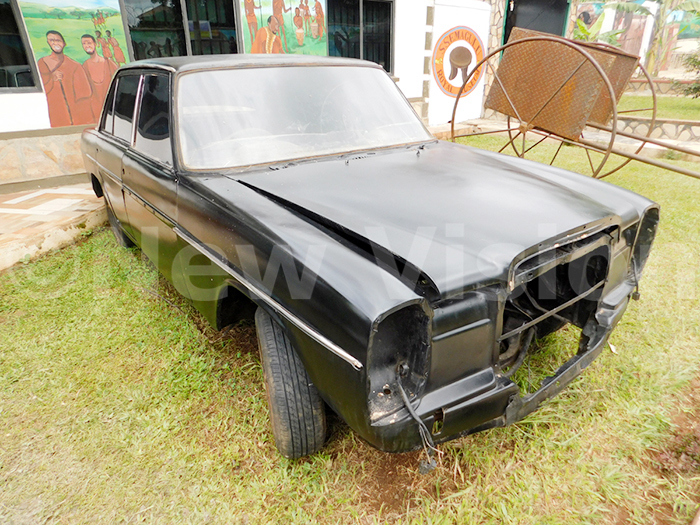 The first Mercedes Benz in Buganda and  Uganda at large.(Credit:Titus Kakembo)

Salama Road was their place of the residence for the sheikhs and other religious leaders. The more reason it has that name Salaam which was corrupted to Salaama."
The rate at which tribes are inter-marrying, tribes and characteristics big noses, short and ebony black complexions are fast disappearing as cross breeds dominate appearance.
That is how noses come sharper, complexions are lighter and the language is spoken in different ways depending  on location.The genesis of the clan system in Buganda was demystified.
The Semagulu Museum tour was crowned by a feast of generous portions of chicken Luwombo(steamed,) a gourd of Mwenge Muganda  and banter about culture being the fabric of individual identities followed. A Statue of the reknowned buganda hangman, Mukajanga who was just a loyal servant who executed his job deligently. (Credit: Titus Kakembo)

Consumers got their tongues honey-coated with every sip from the Buganda endeku (version of a tumbler.) Male guests started wondering why most of the females do not contest for Miss Uganda. Unknown consumers of the beverages were instantly elevated to celebrity status.
Semagulu Museum management was getting ready to handle 300 students the next day.
In future, a tunic for the men and gomasi for the ladies will be the dress code while getting a dose of Buganda history.
If you visited Kampala and missed this package organise another trip.