At Kabwohe Health center IV, the physician requested Kiconco for an HIV test. Samples were taken and came back positive.

At Kabwohe Health center IV, the physician requested Kiconco for an HIV test. Samples were taken and came back positive.

PIC: Faridah Kiconco has been on ARvs for six years. (Credit: Adolf Ayoreka)
HEALTH
By Adolf Ayoreka
SHEEMA - Faridah Kiconco, a resident of Rwengando parish Kiziba Kagango Division Sheema Municipality, sought medical attention on March 16, 2011 on account of her pregnancy.
At Kabwohe Health center IV, the physician requested Kiconco for an HIV  test. Samples were taken and came back positive.
She was given a prescription of septrine which she took until she was introduced to ARVS after giving birth.
According to the notice of intension to sue, from S. KASASA&CO advocates in conjunction with Enforcement of Patients and Health worker's Rights (EPHWOR) addressed to the town clerk Sheema Municipality, the victim intends to file a suit against professional negligence against the recruiting authority in a period of 15 days from the time the notice was written, May 21 2018.
"After testing her Postive, they even tested her CD4 count and was found normal, upon delivery of her baby she was treated as an HIV patient and only breast fed for only one year because of her health conditions, the doctors also advised that her husband be tested and the results came out negative, this was negligently considered as a discordant couple, which was not the case. The husband subsequently denied our client conjugal rights as he we was afraid of contracting HIV" The notice reads.
It adds, "That sometime in November 2016, our client was started on ARVS by the medical personell at Kabwohe health center IV inspite of maintaining a normal CD4 count after six years as a result of ARVs our client suffered from complications which included Hepatotixity, jaundice and renal tocixity, that after the complication, the medical personel ran further tastes which returned negative, similar to other tests that were conducted at Kabwohe Clinical research center and Mbarara regional referral Hospital and they too returned negative"The notice further reads.
Due to the continous ARVs, Farida developed adverse health conditions which she under went at Mbarara Muslim health center.
Claim and damages
There was breach of minimum standards of medcal care by the medical staffs of which Sheema Municipality is vicariously liable for, since the actions of these health workers were reckless, callous and disgraceful violation of applicable standard of care. "From the foregoing of the medical personel at Kabwohe Health center IV failed to properly evaluate and screen Kiconco and perform assessement and tests to detect with certainty, her ailment or approprietly diognise her symptoms.
They therefore demand Sheema Municipal council to pay sh1bn as damages to the social stigma and health complications Kiconco suffered.
Dr. Aruho Emon Kategaya from Enforcements of Patients and Health Workers Rights confirmed to New Vision that they have served Sheema Municipal Councl through their town clerk for negligence. He said that for six years, Faridah was taking ARVs that she got liver and kidney complications and other health complications as a result of false diognosis.
"As the organisation, we decided to enforce her rights by taking ARVS when she was not sick, the trauma she has gone through that's why we partnered up with alaw firm of S. KASASA &Co Advocates to persue this matter and ensure that justice prevails, and that since Kabwohe Health center IV falls under Sheema Municipal council as the recruiting authority, the latter becomes liable,s o we have served them with an intention to sue, because our client has serious complications which may demand her to be refered abroad for specialised treatement" Dr. Aruho stated.
He further appealed health workers to be mindful to patients' lives and rights in abid to have a good working relationship with the community. "This is an issue not only  for Farida, but there are other people who may be suffering the same, let's create awareness and fight this vice"
He also blamed employers who employ health workers without first subjecting them to serious interviews on patient's rights which is a core principle.
Asaba Paul, one of Farida's lawyers maintains that Faridah's health condition keeps on deteriorating every day which necessitated them to take up the matter and ensure that Municipal council compensates her for the graveous dagame caused on to her.
"Her life was put in a reversible situation because of the complications she has, she sold off her land to get money for surgery but was not enough, we want the government to set up minimum standards for all health workers and therefore we want shs1bn as damages because as you see her we don't know whether she can get back to her normal life with in 15 days or else we shall file suit in high court against Sheema municipal council.
On why they sued Council not the health worker, Asaba revealed that Municipal council is entirely responsible for all Government workers in the municipality  and that they assume Council takes necessary steps to recruit these workers and that whoever commits an offense while executing his work, does it on behalf of the recruiting authority. 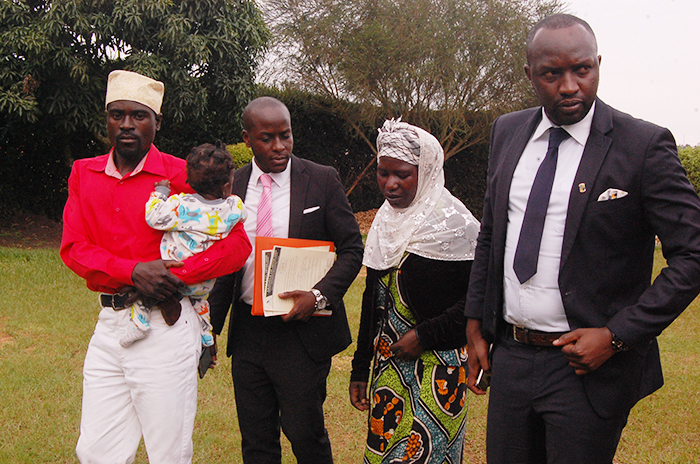 What the victim says
Faridah expressed her appreciation to the lawyers and EPHWOR organisation for coming up to fight for her, she said ever since she experienced this, she had never any kind of help.
"Wherever I went,they would just ignore like I was not a Ugandan but I am extremely greatful to whoever has out to help me seek justice.
"My life changed from the time I was tested positive. I was introduced to ARVs that damaged my liver and kidney.
I was forced to sell off my land to get treatment. My husband also tried to run away as he was scared for his life.
Currently, my eyes have changed  color, my feet and fingers are sweelling something that needs medical attetion. I tried visiting Mbarara referral hospital and they told me a doze for the medicine that can remove the toxication from my body  goes for over sh800000 something  I could not afford and up to now I have never medication,"Kiconco said.
She added that she is also experiencing a breathing problem and constant stomach ache since last year when she tasted negative. " I don't do any thing because I have much pain I keep home, they told me the medicine is very expensive, they just gave me magnesium.
Kiconco's husband, Kisoro Musirimu, also told New Vision that ever since he got know of his wife's status, their family was greatly affected and broken.
"From the I learnt of my wife's HIV status I lost peace and our family was greatly affected. I have also spent alot of money from thst time trying to look after her so that she stays healthy,"he said.