Uganda's most visited national parks and why
Next Story

Talking about species, UWEC spokesman Isaac Mujaasi said the number of shoebills that will be left in 20 years’ time will be very few.

Talking about species, UWEC spokesman Isaac Mujaasi said the number of shoebills that will be left in 20 years’ time will be very few.

PIC: The rescued shoebill back to its original habitat, Mabamba swamp. (Credit: Titus Kakembo)
WILDLIFE
MABAMBA SWAMP - A Shoebill rescued in January 2018, and kept under close scrutiny at Uganda Wildlife Education Centre (UWEC) was released back to its natural habitat in Mabamba swamp May25.
The occasion attracted the: Uganda Bird Guides Club, Nature Uganda, Uganda Safari Guides Association and local leaders.
Talking about species, UWEC spokesman Isaac Mujaasi said if the poarching vice is not done away with, the number of shoebills that will be left in 20 years' time will be very few.
"The rate at which their habitat; the swamps, are being encroached on, spells disaster," said Mujaasi. "Currently, we have them surviving in Mabamba, Lake Opeta, Murchison Falls National Park and Makanga. That is where they catch their fish and nest." 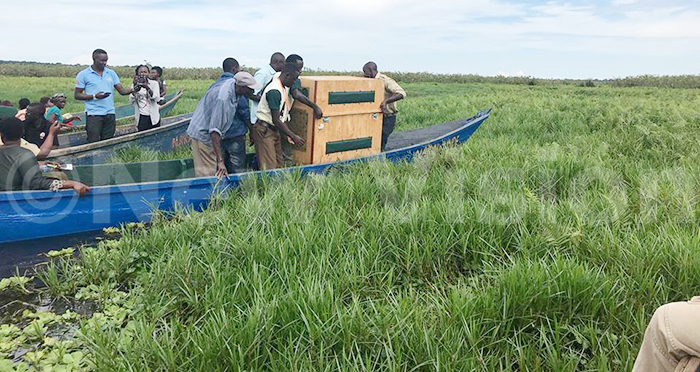 Members of the uganda guides club and other people transport the brid(in the cage) back to its habitat. (Credit: Titus Kakembo)

The Chairman Uganda Bird Guides Association, Herbert Byaruhanga was a revelation of how the Mabamba community transformed from being habitual poachers, to guides with oar driven boats.
"The community used to hunt birds, hit snakes and sell them to willing buyers in the 1990s," said Byaruhanga.
"However, all this changed. Now they know where the Grey African Parrots are and how the weaver birds behave when they spot a snake navigating to their nests for eggs."
Byaruhanga says Uganda's niche in tourism is more than 1065 bird species which need to be marketed aggressively. 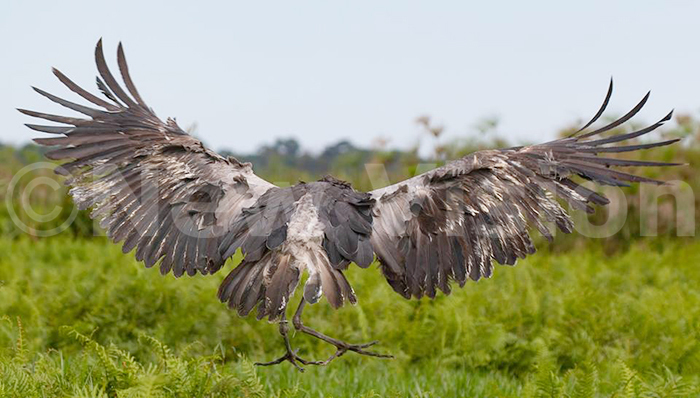 "The aggressive marketing being done to gorilla tracking ought to be done on the bird watching product," stressed Byaruhanga.
"Given the diversity of altitudes, climates and different vegetation, Uganda is not only witnessing humans fleeing war but birds seeking refuge when its winter in Europe. They dine with the resident shoebills."