MENU
A voice in a million
Previous Story

Bafumbira World celebrates culture this we...
Next Story

The project is aimed at strengthening protected area management in the Kidepo region including Kidepo Valley National Park.

The project is aimed at strengthening protected area management in the Kidepo region including Kidepo Valley National Park.

The centre is next to Kidepo Valley National Park, built with support from Global Environment Facility (GEF), the Government of Uganda, Uganda Wildlife Authority (UWA) and UNDP under Kidepo Critical Landscape Project.

The project is aimed at strengthening protected area management in the Kidepo region including Kidepo Valley National Park. It is also to improve on alternative livelihood for the community so that they can help in the protection of wildlife.

Samson Lokeris said the old people who were hunters, did not use to kill animals recklessly the way it is happening now. He said during the earlier days, when a person wanted meat or tail of an animal, he would go and select just one for the purpose.

He said the situation changed after Obote was overthrown by Amin (1971 coup) and many people acquired automatic weapons.

James Okiria Ateker, NEMA programme officer explains that the women group got funding of sh86m to help strengthen the conservation and sustainable use of threatened savannah woodland.

Okiria said the idea of the centre which is equipped with bandas (simple housing unit) is to have a place where low-income tourists to Kidepo Valley National Park can be brought for accommodation.

Claudia Akongo, the group's chairperson explains that they make crafts and display in the shop and when tourists come, they buy and the money is saved and used to maintain the cultural village. She said they also operate a shop as the community has no near place to buy commodities.

Akongo said members of the community also bring in crafts which is sold at the centre and some tax levied to sustain the centre.

Samson Lokeris commended GEF for the support to the local community of Kawalakol saying this will give the people the opportunity to conserve the environment.

The area LC1 chairperson requested UWA should bring a rhino to the area because they did not have a chance to see what existed in the area long ago. 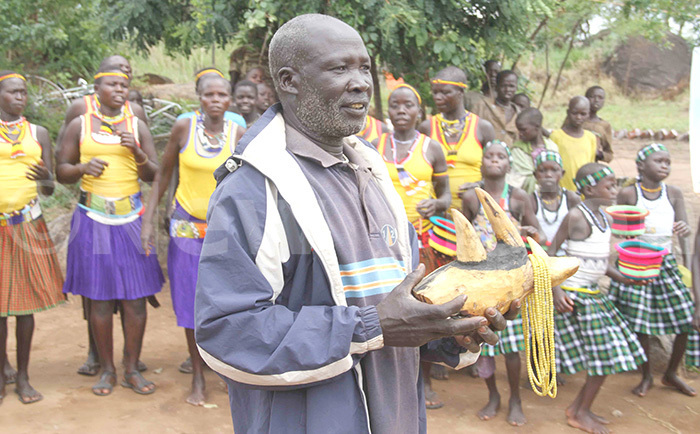 Daniel Popo Lobaang, 64, the Parish chief of Kawalakol Parish exhibit a rhino horn as others sing about a rhinoes which existed in the National Park before they became extinct. The singers said they want the rhino reestablished in the park.  (Credit: Hudson Apunyo)

Augustine Johnson Masereka Chief Warden Kidepo Conservation Area said they have been working with the community and are proud of the Kawalakol group and using them as a model community for development in the area.

Daniel Omodo Mcmondo, UNDP Programme Analyst Energy and Environment who is the focal point person for the Kidepo Critical Landscape Project equated the group with the biblical seed that fell on fertile soil.

Omodo said the project is aimed at strengthening protected area management in the Kidepo region including Kidepo Valley National Park.

Musoli suggested that a website be created for the community so that they are visible. He pledged to follow up the project so that it continues.

Daniel Popo Lobaang, 64, the Parish chief of Kawalakol Parish, said the community has come to realise that it is good to conserve the environment. 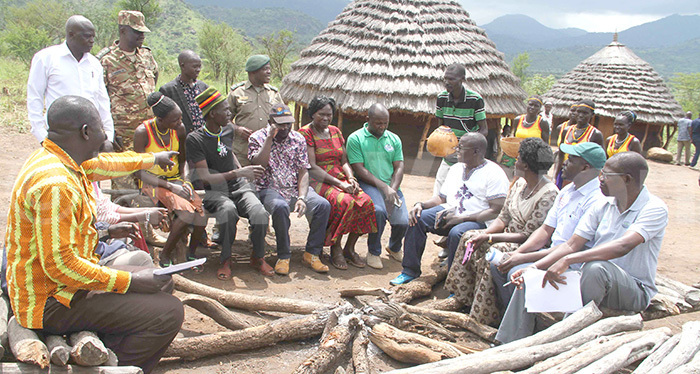 Guests sit at the Atem (fire place) where the men and boys used to sit to listen to the elders while the girls sat with their mothers in the kitchen.  (Credit: Hudson Apunyo) 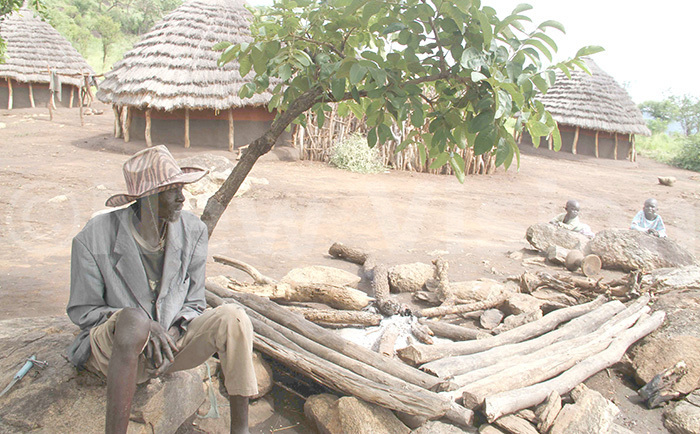 An old man acting as a receptionist who directs guests at the cultural centre homestead. (Credit: Hudson Apunyo)

All set for Bobi Wine trial in Gulu