UPDF cracks down kidnaps on Ugandan waters
Next Story

'The beauty of Fr Mukwaya’s songs is their simplicity. It will not take you long to learn and sing any of his musical pieces when you hear them'

'The beauty of Fr Mukwaya’s songs is their simplicity. It will not take you long to learn and sing any of his musical pieces when you hear them'

KAMPALA- "Our brother Fr Gerald Mukwaya has made an enormous contribution to the music of the Catholic Church in Uganda. His song, Twebaze Mapeera, helps us to know the history of our Church every time we sing it. We acknowledge his commitment and loyalty to the Church."

These were the words of the Metropolitan Archbishop of Kampala Archdiocese, Dr Cyprian Kizito Lwanga, as he appreciated the dynamic musical ministry of Fr Gerald Mukwaya, a priest of the Catholic diocese of Masaka, who has composed about 100 church hymns since 1979.

Lwanga made the warm remarks during a tribute sacred musical concert for Fr Mukwaya at Pope Paul Memorial Hotel, Rubaga, on Sunday.

The concert was organised by Justine Nabbaale, a promoter of Catholic music and musicians. It featured choral groups such as St Joseph Mary's SS, Mbiriizi (Masaka) and St Agnes Kibuye-Makindye Catholic Church choir, which sang hymns composed by Fr Mukwaya. 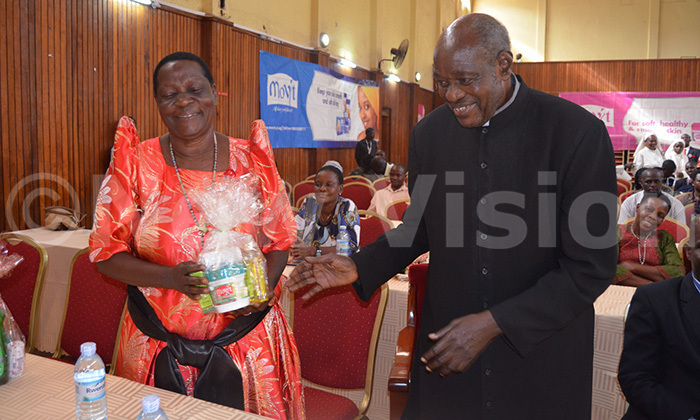 Mukwaya receiving a gift from a relative during his thanksgiving concert. (Credit: Mathias Mazinga

"The beauty of Fr Mukwaya's songs is their simplicity. It will not take you long to learn and sing any of his musical pieces when you hear them. Fr Mukwaya is also a practical priest, who leaves a mark everywhere he is posted. He did amazing work when he was the youth chaplain in our diocese," Lwanga said.

The MP for Kabula County, James Kakooza (the chief guest) also praised Fr Mukwaya for putting his musical talent to the service of the Church and the people of Uganda. He donated a cow and sh1.3m to Mukwaya. 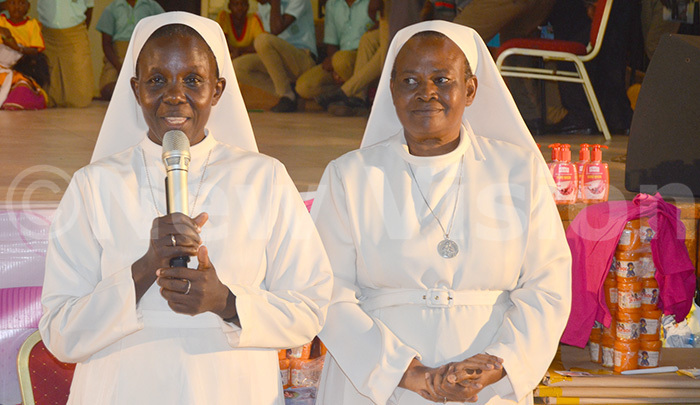 Fr Mukwaya said he was humbled by the tribute concert that the choir staged in his honour. "When I was invited for this concert, I felt like crying. Surely I do not deserve all this honour. I thank all those who have appreciated my ministry, in particular Archbishop Cyprian Kizito Lwanga, Bishop John Baptist Kaggwa, Msgr Serverus Jjumba, Justine Nabbaale and all of you people of good will. Please continue to pray for me."

A brief on Fr Mukwaya

Rev Fr Gerald Mukwaya, 82, is a priest of Masaka diocese. He was born at Kayunga, in Masaka, on October 16, 1936. He was ordained a priest on December 13, 1964. He subsequently served in parishes such as Nkoni, Bukulula and Kimaanya, after which he was sent to Germany to study brick-laying.

He was later posted to Butende and Narozaali parish, before being sent to Australia to specialise in youth ministry. He later served as the national youth chaplain, and parish priest of Ssaza Parish. He is currently living at Mbiriizi Catholic Parish. Fr Mukwaya is currently weak, having suffered a stroke in 2016.

During his ministry, Mukwaya has written songs such as Asaana Kwebaza and Twebaze Mapeera, which he composed in commemoration of the centenary of the Catholic Church in Uganda in 1979. He has also written about 50 poems. 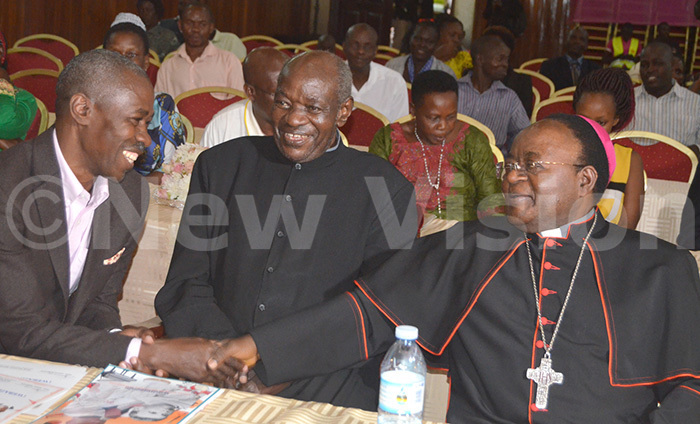