Who can stop the giants? Damani up and run...
Next Story

Drama at Lugogo:  Vipers forced to wait on celebrations

The defending Champions’ chances on the title had been greatly stalled when BUL FC’s Jean Piere Muhindo cancelled out Derrick Nsibambi’s half time effort.

The defending Champions’ chances on the title had been greatly stalled when BUL FC’s Jean Piere Muhindo cancelled out Derrick Nsibambi’s half time effort.

PIC: Vipers coach Jorge Miguel Da Costa and his players celebrated their league win prematurely with his players after the Vipers versus Express match at the St. Mary's stadium, May 22 2018. (Credit: Mpalanyi Ssentongo)
FOOTBALL
Azam Uganda Premier League
Results
KCCA 2 BUL FC 1
Vipers 5 Express 0
LUGOGO - Derrick Nsibambi's last gasp header against BUL FC Tuesday at the Startimes Stadium put grains of hope in the back of KCCA minds to remain in contention of this year's Azam Uganda Premier League.
The defending Champions' chances on the title had been greatly stalled when BUL FC's Jean Piere Muhindo cancelled out Derrick Nsibambi's half time effort.
In a highly eventful game, the visitors were more energised in the second half of the game, determined to run down the home side.
James Otim came close in leveling the matters for Kefa Kisala's  side only for  his long range effort outside the box to be denied by the wood work.
None the less they kept pressing until Muhindo's short went past on-form Charles Lukwago who was between the sticks for the boys in yellow. 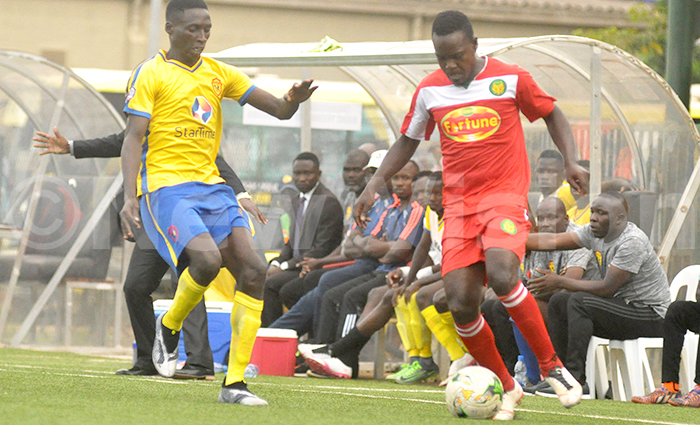 However, the travelling side proved wasteful further and certainly they had to pay in the final moments of the added four minutes as Derrick Nsibambi hang in the air to head into the net KCCA's second of the game.
Elsewhere leaders Vipers went cruising past relegation prone Express 5-0 at the St Mary's Stadium in Kitende.
Interestingly, the Venom's coach Miguel De Costa was reduced to tears after learning of KCCA's last gasp winner. The Venoms thought they had sealed the league as reports had indicated a draw at Lugogo.
As it stands now, Vipers on 62 points must win their last game of the season home against UPDF on Friday. Second placed KCCA (60 points) on the other hand hope the leaders falter with them winning their last away game against Police.
Email:kbalikuddembe@newvision.co.ug
Twitter: @casozi14