The winners in the six categories walked away with sh10m each, awarded to them by the Lutheran World Federation (LWF), Uganda, an organisation that takes care of refugees.

The winners in the six categories walked away with sh10m each, awarded to them by the Lutheran World Federation (LWF), Uganda, an organisation that takes care of refugees.

PIC: Winners with their dummy cheques after the event. (Credit: John Semakula)
ENTERTAINMENT
KAMWENGE - Congolese refugees residing at Rwamwanja Refugee Resettlement village in Kamwenge district won prizes worth millions of shilling after competing in a youth talent show.
The competitions organised on the theme "My Talent, My Breakthrough Opportunity 2018", saw 18 finalists compete in six categories including music, fashion, dance, graphic art and drama.
The winners in the six categories walked away with sh10m each, awarded to them by the Lutheran World Federation (LWF), Uganda, an organisation that takes care of refugees.
The winners included Espoir Rugaju who won under the music category, Esther Mampoeo (Fashion and design), Theogen Munguiko (Art) and Able Jonathan a participant from the host community who won in the dance category. 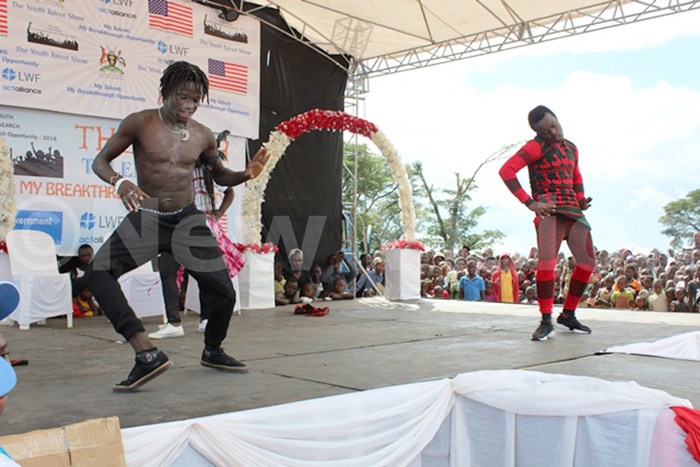 "I will use this money to develop my talent in order to make more money," said Able.
The first and second runners-up also bagged sh1.5m and sh1m, respectively.  In total, the participants won prizes worth about sh100m.
LWF, the organisers of the event noted that besides building talents to empower the youth economically; they also intended to keep them productive as a way of diverting them from committing crime.
There are growing concerns that if the refugees are not empowered to develop their talents, they could meander into evil activities such as drug abuse. Uganda is a home for over 1.39 million refugees and asylum seekers from the neighbouring countries including DRC.
Myanda Safasco, 25, from North Kivu, DRC told New Vision that the competitions have given them relief from the trauma of war. "That's why we gave the event our best," Myanda said.
The event took place at Nkoma Sub County headquarters in Kamwenge where refugees and other invited guests converged on Wednesday.
The LWF country director Jesse Kamstra noted that the refuges' talents are their strongest assets depending on how they are organised and use them.
Kamstra also said they will continue to receive and support refugees from DRC and South Sudan until the wars in the two countries end. 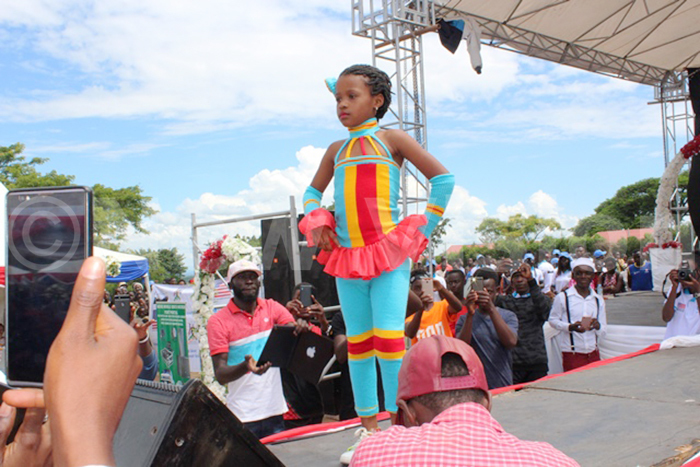 A child participating in the fashion contest at the recently  concluded youth talent show in Kawenge. (Credit: John Semakula)
The team leader of the Platform 503 the group that trained the youth ahead of the competitions, Milton Maopini said their plan is to reach out to every youth in the refugee resettlement areas.
"Knowledge and skills should be spread everywhere such that all the refugees are empowered," Maopini said. "This work aims at building and developing young people through talent."
In his remarks, the LC5 chairman Kamwenge Aggrey Natumanya said he was grateful to God for the relationship between officials from the office of the Prime Minister that take care of the refuges and the different agencies like LWF.
He appealed to the refugees and members of the host communities to live in peace with one another.
"These refugees are our brothers from Congo and we must treat them the way we treat ourselves. He promised the support of local leaders to the refugees.
Turning to the youth he said, "Let's not use the talents God gave us to commit evil. Let's utilize them for productive activities. If your activity can cause harm to your body please avoid it and resort to the so many other that can benefit you."

I owe my self-esteem, confidence to dad

I owe my self-esteem, confidence to dad