We are not going to Namugongo to eat pork ...
Next Story

Kampala Archdiocese to get 67th parish

Lwanga said the Kkonge-Lukuliparish will be under the Missionary priests of Congregation of the Holy Cross, led by Fr William Gyagenda.

Lwanga said the Kkonge-Lukuliparish will be under the Missionary priests of Congregation of the Holy Cross, led by Fr William Gyagenda.

On Sunday, Lwanga made the announcement while preaching at St Denis Ssebuggwaawo sub-parish on Sunday.

Kkonge-Lukuli, named after Saint-Denis Ssebuggwaawo, is a sub-parish under Our Lady of Mount Carmel Catholic Parish Kasanga, was started by the community in 1963.

Priests, including Parish Priest of Kasanga Fr Achilles Mayanja, the Holy Cross priests (Missionaries) and several others who went to witness the launch of the function.

Lwanga said a parish is a definite community of Christian faithfuls established on a stable basis within a particular Church.

Other high profile figures present were managing director of Centenary Bank, Fabian Kasi, who donated sh5m on behalf of the bank, Makindye Division mayor, Ali Mulyanyama, who also contributed sh500,000 towards the construction of a four-storeyed building to house the priests.

Lwanga said the parish will be under the Missionary priests of Congregation of the Holy Cross, led by Fr William Gyagenda.

Currently, the sub-parish is under Nsambya Parish. It was initially under Kasanga, which became a parish in 2002.

The Archbishop encouraged parents to name their children in memory of Uganda Martyrs, for purposes of moral connection, instead of giving them movie star names.

At the same function, two couples wedded and were cautioned to remain trustworthy and responsible. 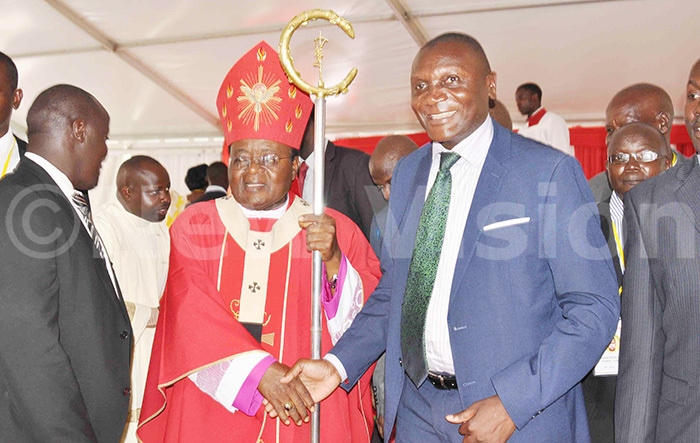