Meghan Markle: LA actress with the fairyta...
Next Story

The wedding of Prince Harry and Meghan Markle on Saturday will be a fun-filled occasion.

The wedding of Prince Harry and Meghan Markle on Saturday will be a fun-filled occasion.

PIC: A wedding cake and portraits are displayed during the launch of an exhibition commemorating the royal wedding of Britain's Prince Harry and US actress Meghan Markle, organised by the British Embassy on Thursday at Bangkok's plush shopping centre. (AFP)
WEDDING BELLS
LONDON - The wedding of Prince Harry and Meghan Markle on Saturday will be a fun-filled occasion but run with military precision, as per British royal tradition.
The wedding service will be followed by a carriage procession, a lunchtime reception and an evening party.
Details of the day's programme
At 9:00 am (0800 GMT): Some 2,640 people, such as charity workers, community leaders and military veterans will begin to enter the grounds of Windsor Castle where they will be able to see the royals before and after the ceremony.
The onlookers will include 200 people from charities and organisations associated with the couple, 100 pupils from local schools and 530 royal staff.
At 9:30 am (0830 GMT): The first of around 600 wedding guests begin to fill St. George's Chapel. They arrive by coach at the castle's Round Tower and walk to the chapel's South Door. Music begins from 10:35 am inside the chapel.
At 11:00 am (1000 GMT): The last non-royal guests take their places.
Members of the royal family will begin to arrive at 11:25 am (1025 GMT). They enter the chapel via the Galilee Porch on the south side.
At 11:40 am (1040 GMT): Prince Harry and his best man, his brother Prince William, arrive at the West Door and are received by the Dean of Windsor, David Conner, who will conduct the service.
11:45 am (1045 GMT): Meghan's mother Doria Ragland arrives at the Galilee Porch and is taken to her seat by the Dean of Windsor.
She is spending the night before with her daughter at a hotel and they will drive together to the castle, before she gets out and goes into the chapel and Meghan joins her bridesmaids and page boys.
11:52 am (1052 GMT): Queen Elizabeth II arrives at the Galilee Porch and is escorted to her seat. A fanfare will sound, the choir and clergy will process through the church. All will sit.
12:00 pm (1100 GMT): The wedding service begins. Meghan enters via the West Door, to the sound of fanfare. She will walk down the aisle on her own at the start, before being joined by Prince Charles.
The Dean of Windsor will conduct the service, which will include two hymns and a performance by the choir of soul classic "Stand by Me".
Justin Welby, the Archbishop of Canterbury, will officiate as the couple make their wedding vows. 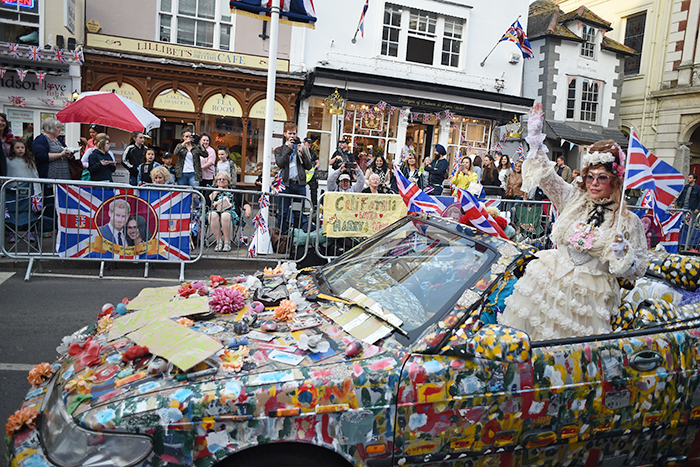 A woman waves from an elaborately decorated car to Royal well-wishers preparing to bed down for the night on the High Street outside Windor Castle in Windsor on Thursdasy,at the eve of Britain's Prince Harry's royal wedding to US actress Meghan Markle. (AFP)
All three siblings of Harry's late mother Diana, princess of Wales, will be in attendance. Diana's sister Lady Jane Fellowes will give the reading from the Song of Solomon.
At 1:00 pm (1200 GMT): The newlyweds come out from the West Steps and greet the charity representatives.
Close family members wave them off from the steps as they go on a 25-minute carriage procession through Windsor.
The route takes them down the High Street and along the Long Walk tree-lined avenue back up to Windsor Castle.

The Royal wedding.Prince Harry wedds former US actress, Meghan Markle (Credit: Today Show)
The will travel in the horse-drawn Ascot Landau carriage, accompanied by a travelling escort of the Household Cavalry Mounted Regiment. The carriage will be pulled by four Windsor Grey horses.
1:30 pm (1230 GMT): Reception given by Queen Elizabeth II is held at Windsor Castle's St. George's Hall for the couple and the 600 wedding guests.
Afterwards, the couple and the royal family will pose for the official pictures taken by portrait photographer Alexi Lubomirski.
Evening programme
Harry's father Prince Charles hosts a private reception for 200 close friends and family at Frogmore House.

Mulenga to probe Judiciary on graft