We will be back on air soon-Bukedde TV
Next Story

Al Shabab fueling disunity and fighting among clans in Somalia

The fighting amongst the clans originated from ownership of land

The fighting amongst the clans originated from ownership of land

The Al Shabab militants have been fueling clashes between the different clans in Somalia, exploiting their confusion and disunity to recruit and wage war against the African Union Mission in Somalia (AMISOM) peacekeepers.

Col. Bonny Bamwiseki, the commander of Battle Group 22, which has its headquarters at Ceeljaale in Marka district, said Al Shabab had been at the helm of encouraging clans to fight and kill each other, from where they would recruit massively to fail the peace mission.

Ceeljaale is located in Lower Shabelle region, about 120km South of Mogadishu.

But the Uganda People's Defense Forces (UPDF) under AMISOM have been engaging the rivaling clans with a mission of stopping the fighting and reconciling them to be able to work together in harmony.

According to Bamwiseki, the different clan chiefs have discovered that Al Shabab's mission of encouraging clashes was different and accepted to stop killing each other.

On weekly basis, he said, clan chiefs and elders from the region meet at their base in Ceeljalee where they have been able to discuss for a way forward.

They have also realised that their people would benefit from their reconciliations, by trading with each other for the sake of development.

As a result, the local militias who operate under the command of chiefs and elders have instead joined the struggle and have turned the guns against one common enemy, Al Sbabab. 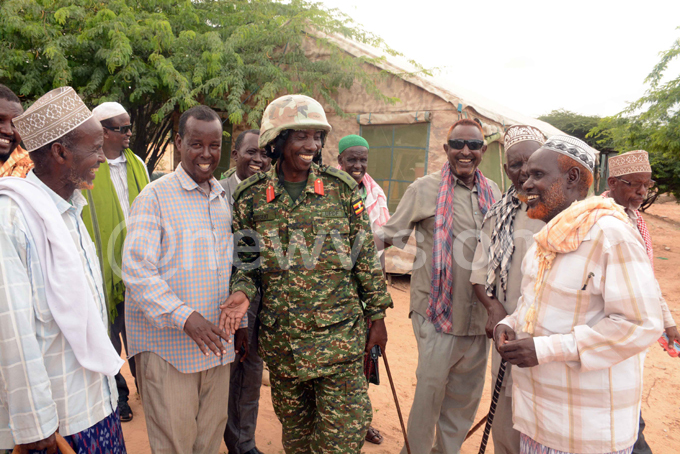 The fighting amongst the clans originated from ownership of land, where for some time major clans have been clashing on who owns the fertile land for cultivation.

The clan disunity, Bamwiseki said, had made it difficult for the peace keepers to win the Al Shabab since they would also mix with the population from where they hatched plans to attack their bases.

In a recent meeting at the Battalion heads office, several local leaders expressed gratitude to the contribution made by AMISOM forces. It was attended by the District Commissioner for Marka, Mohammad Osuman Ali, Sheikh Yusuf Osman, the Clan Chief for Ceeljaale, elders from Marka led by Muhammad Ali Abdi Jeylani Hassan Osman and Muhammad Abdikadir Bujeti, among others.

He said as a result of the dialogues, the clans have started trading by allowing commercial vehicles to ferry goods from either sides, which he said had given an opportunity to the local communities to engage in income generating activities.

"We have greatly benefited from their unification, the elders know and can easily identify Al Shabab militants and are able to follow them, and SNA and AMISOM come later to give them support," he explained.

Sheikh Ali said that stopping clan clashes had enabled them to defend themselves even without government forces.

"We have started working together and trading, business is going on. Traders from one clan come and buy stones here, we also buy foodstuffs from them. We have opened our school where all children are allowed to study," he said, adding the Al Shabab was the only enemy.

The elders said they had finally abandoned killing each other and united themselves against Al Shabab, and ‘if they come we shall fight them, if they want to kill AMISOM forces, we are ready to die together'.

Muhammad Abidi Ali however asked AMISOM forces to extend their stay in the area and move further to liberate more towns where Al Shabab is still controlling.

He said if AMISOM withdraws, Al Shabab will gain control of the areas they already liberated and cause chaos

"We have managed to ease the tensions amongst ourselves and we are united against one common enemy who are Al Shabab," he said. He explained that their biggest worry was about the plans of for AMISOM to reduce forces and finally withdraw, yet there were still more areas in the enemy territory, which he said they needed to liberate.

Civil servants asked to use new technologies to tackle poverty