A frail looking boy, the youngest of the group, acted as lookout in the ongoing game of hide and seek with Spain's Civil Guard police force.

A frail looking boy, the youngest of the group, acted as lookout in the ongoing game of hide and seek with Spain's Civil Guard police force.

PIC: Young Moroccans gather at the harbour of the port city of Ceuta. (AFP)
IMMIGRATION
CEUTA - At 14 years old, Ismail said he is "ready for anything" as he tries to board a boat for Europe and leave his Moroccan homeland behind.
While waiting to fulfil his dream, Ismail ambles around the port of Ceuta a Spanish enclave in Morocco wandering the streets like dozens of other children.
"At home, there's no future," said the teenager, slouched on the pavement dressed in a sweatshirt and beanie hat.
Originally from Tangier in northern Morocco, Ismail said he grew up in a poor family and left school aged 12.
With the permission of his mother, who prays for him to reach Europe, he travelled the 100 kilometres (approxiamtely 60 miles) to Ceuta and two months ago climbed the border fence at dawn.
Recounting his story surrounded by around a dozen youths, he described himself as "addicted to hashish" as his companions bickered over sharing a joint.
A frail looking boy, the youngest of the group, acted as lookout in the ongoing game of hide and seek with Spain's Civil Guard police force.
In order to reach Ceuta or Melilla, another Spanish enclave, migrants must first scale the barbed wire fences which mark the only land borders between Europe and Africa.
Those under 18 are hoping to benefit from European legislation which gives them greater protection than adult migrants and limits the chances of their being deported.
The regulations are enforced to varying degrees within the European Union and, after years of migrants travelling across the sea, the rules are becoming increasingly restrictive.
Dreams or destitution
But Ismail will not be deterred and sees his future in the Spanish capital, following in the footsteps of one of his neighbours. 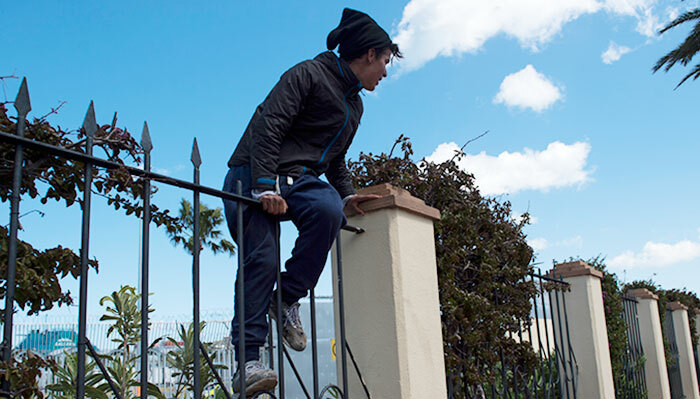 A young Moroccan climbs a fens at the harbour of the port city of Ceuta, a Spanish enclave perched on the northernmost tip of Morocco, on April 11, 2018. (AFP)
"He lives in Madrid, a really beautiful city," Ismail said passionately, describing his own wish to "become a mechanic, buy a car and a house".
Like the dozens of young migrants in Ceuta, realising his dreams entails clinging onto the underside of a vehicle boarding a ship for the port of Algeciras in southern Spain.
After making the 40-minute sea crossing, they continue their journey on land towards their final destination be it Madrid, Paris, or elsewhere.
But whether originating from Sub-Saharan Africa, Morocco or Algeria, child and adult migrants frequently find themselves destitute.
The charity Save the Children recently raised concerns about "the vulnerability of these boy migrants, who find themselves alone on the streets of Ceuta, exposed to all types of danger".
In 2016 the organisation found a total of 246 unaccompanied minors in Ceuta, and nearly 1,000 in Melilla.
The group of young hopefuls in Ceuta survive by sleeping in cars and scrounging cigarettes and food.
Research association Migreurop last month denounced "police violence" against the young migrants on both sides of the border, calling on Spain and Morocco to "respect the rights of child migrants".
'Make a life'
Their perilous attempts to cling onto trucks going through the port are high-risk, with Ismail saying one of his friends was "killed intentionally" last month when he was run over.
"Look, they want to finish with us," he said angrily, as truck drivers went full-speed at the sight of the approaching boys.
Despite hostility from drivers and the authorities, one young woman arrived to offer the group some rare support.
"She works for an association where you can go to shower, get online or watch films," said Nabil, the eldest of the group.
Originally from the Moroccan capital Rabat, where he grew up in a working class neighbourhood, the 20-year-old passes himself off as a minor.
Despite tales of success reaching the youths from Europe, the reality for young migrants is often far from the dreams held at the portside.
Those who have gone before them are frequently left exploited and isolated, with dozens of young Moroccans resorting to petty theft to survive on the streets of Paris.
They remain wary of authorities and often refuse help, prompting the resentment of locals.
But the young migrants in Ceuta are determined to continue along their uncertain path, with Nabil aiming to reach Germany.
To "make a life for myself and see what Morocco looks like from the outside," he said.