UN Regional Services Centre to remain in E...
Next Story

Hawaii volcano could be building up to big eruption: scientists

Scientists estimate that the lava could interact with the groundwater by the middle of this month.

Scientists estimate that the lava could interact with the groundwater by the middle of this month.

PIC: The Hawaii Volcano has been ozzing lava and burping steam for days.(AFP)
TRAGEDY
LOA ANGELES - A Hawaii volcano that has been oozing lava and burping steam for days may be gearing up for a huge eruption.
Scientists have warned locals, prompting the closure of Volcanoes National Park on Friday.
It is the newest threat from the Kilauea volcano, which began erupting last Thursday on the US state's Big Island, the National Park Service said.
Scientists say lava levels in the crater are going down, meaning it might be clogging and building up for a mighty blast.
"Movement of the molten rock opened space for lava at the summit to drain underground, reducing the height of a lava lake at the summit," US Geological Survey geophysicist, Ingrid Johanson told the Los Angeles Times.
But, as the lava lake levels fall below the groundwater table, water can start interacting with the magma, heating it up and creating steam, said USGS scientist,
Donald Swanson. 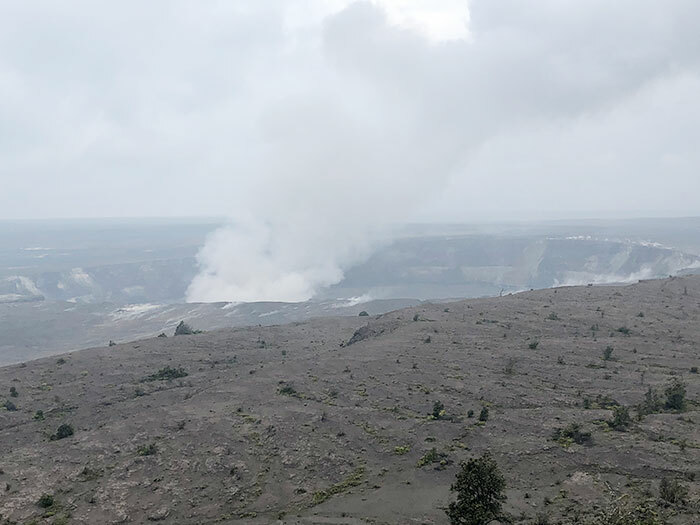 Smoke from the Kilauea volcano rises from the Halema'uma'u crater on the Big Island in Hawaii, on May 9. (AFP)

And if rocks fall from the walls surrounding the magma in the volcano, the rocks can form a dam.
And then, if the steam builds pressure, "it can eventually burst out in an explosion," Swanson said.
Scientists estimate that the lava could interact with the groundwater by the middle of this month.
Mathew Devlen, an American film maker visiting Hawaii as a tourist, said he was awed by it all.
"I think the power of this is just an amazing thing to witness. And what the people here are going through is tragic," he told AFP.
"I really admire them on how they deal with it, because they know that this is here for them and they respect their island and they're dealing with it in a way I've never seen anyone else deal with," he added.
Kilauea is one of the most active volcanos in the world and one of five on the island.
A magnitude 5 earthquake under its south flank preceded an initial eruption last week and several severe aftershocks followed.
A quake last Friday was measured at magnitude 6.9, the most powerful to hit the islands since 1975.
No one has died, but the flowing lava has destroyed dozens of structures in an area called Leilani Estates.
Hundreds of people have been forced to evacuate their homes because of the lava and the threat of toxic fumes.

Rema returns to the stage reloaded

Biden accuses Trump of trafficking in 'resentment and fear'

Biden accuses Trump of trafficking in 'resentment and fear'...